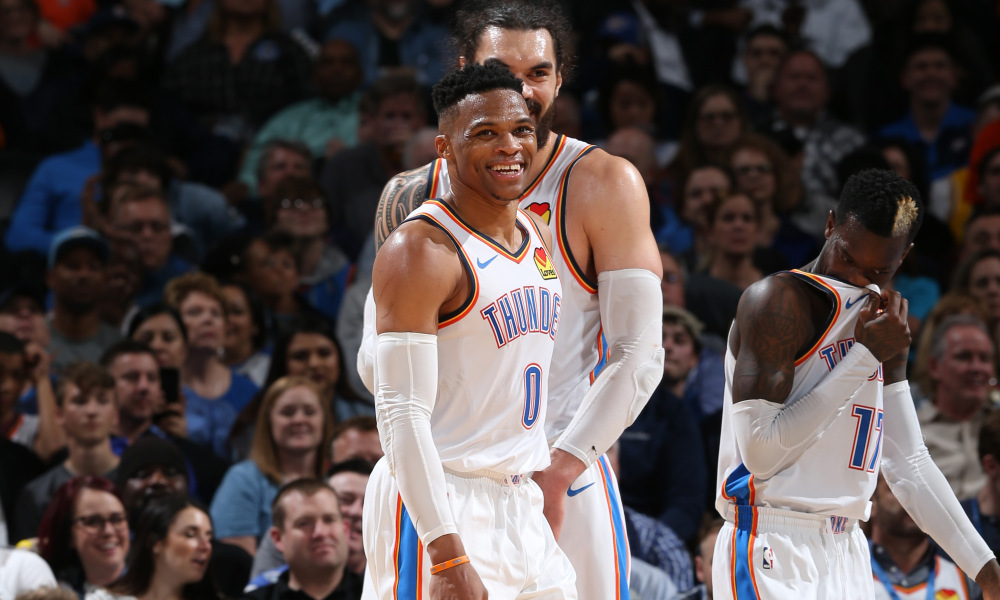 Russell Westbrook clinched his third straight season averaging a triple double as the Oklahoma City Thunder beat the Detroit Pistons 123-110 in a NBA contest crucial to both teams' playoff hopes.

Paul George scored 30 points and Jerami Grant had 19 for Oklahoma City who won for the second straight game and fourth time in the past seven.

Westbrook came into the game needing three assists to secure his triple double season average and did it on just the fourth possession by Oklahoma City.

He is the only player to achieve the feat in consecutive seasons and he also leads the league in assists.

The Thunder improved to 46-33 on the season and remain in seventh place in the Western Conference, a half-game ahead of the San Antonio Spurs, who also won Friday.

The Pistons lost for the third consecutive game and for the sixth time in their past eight.

Detroit dropped into a tie for seventh in the Eastern Conference with the Brooklyn Nets, just a game ahead of the ninth-place Miami Heat.

Piston's Blake Griffin tallied 45 points, but when the game got close he scored just one point in the fourth quarter. Griffin had 31 points in the first half and made six of nine three pointers before going cold.

Steven Adams slammed home a dunk on a pass from Westbrook to give Oklahoma City a 92-86 lead late in the third quarter.

Westbrook and Grant drained consecutive threes to make it 113-101 at the six minute mark of the fourth. Grant finished off a lob from Dennis Schroder to extend the lead to 14 and the Thunder never looked back.

Elsewhere, Jayson Tatum and Gordon Hayward combined for 43 points as the Boston Celtics seized sole possession of fourth place in the Eastern Conference standings with a 117-97 win over the Indiana Pacers.

Tatum had 22 points and Hayward 21 for the visiting Celtics who are battling for home court advantage in the postseason. Boston is also trying to catch third place Philadelphia in the standings.

The Celtics improved to 48-32 on the season to break a fourth place tie with the Pacers.

Kyrie Irving finished with 17 points for Boston and Hayward went a perfect nine-for-nine from the floor and three-for-three from the charity stripe in the win.

Myles Turner scored 15 points for the Pacers, who have lost eight of their past 11 games and are struggling late in the season.

The fourth-place Celtics and fifth-place Pacers are currently in line to meet each other when the postseason begins next weekend.