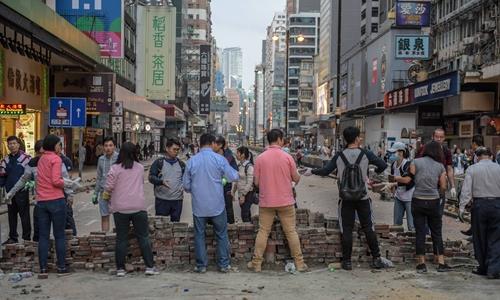 Residents clear a barricade left by rioters on a street in Hong Kong Special Administrative Region on Friday. (Photo: IC)

As the months-long violence in Hong Kong entered a deadly level in the past two weeks, with radical rioters turning university campuses into "terror camps" to engage in clashes with police, a public opinion battle reached a turning point with more Hong Kong residents, media outlets and even Western media courageously saying no to violence or devoting more space to recent radical violence.

On Saturday, about 100 local residents went to Yau Ma Tei, Tsim Sha Tsui, and Mong Kok to clear the handrails, bricks and trash left by rioters the night before. They included office workers, retired seniors, students and businessmen, who probably didn't know each other before working together to remove large steel rails or brick walls.

Johnny Tson, a Hong Kong resident who had cleared roadblocks several times in the past week, told the Global Times on Monday that it's their way to express their opposition to rioters who turned black into white and undermined Hong Kong's social stability.

"I want the Hong Kong government to see that our ordinary residents could voluntarily join the anti-riot operation so that the government could carry out stricter law enforcement to prevent innocent residents from being hurt, and also let our motherland people see Hong Kong have people who love the country and the city, and that we are willing to stand out," Tson said.

Even foreigners living in Hong Kong who could not stand any more violence joined the road clearing. A 10-minute video of Hong Kong residents clearing the roadblocks has gone viral on Chinese social media, in which several black-clad protesters placed bricks to block the road with onlookers watching from a distance. Shortly afterwards, a foreigner in a blue suit walked to the middle of the roadblocks, picked one brick and put it on the side of the road. Then more residents followed suit to clear the roads.

Chinese netizens said they have seen a silent battle in the video and people's firm faith that justice will prevail.

Witnessing the increasingly fierce riots, some Hong Kong students, who are considered as the main force in the months long protests, began to change.

A middle-school student named Haley told the Global Times that he kept neutral when people only staged peaceful protests. But when protesters turned more and more violent recently, Haley felt his sense of morality had been challenged.

"I don't want to see innocent people being attacked. You cannot argue with those black-clad protesters who have lost their rationality," Haley said.

Haley said that once the profile photo of his friends on Instagram turned black as they showed support to the protesters, he was so angry that he deleted the app on his phone.

Major Western media outlets, which often turned a blind eye to the escalating violent rioters and rumors they created, seemed to finally acknowledge it recently, although blame on the Hong Kong government and police still exist.

Bloomberg on November 12 published a story entitled "How Fake News And Rumors Are Stoking Division in Hong Kong," saying that Hong Kong is being "inundated with online rumors and fake news" and protest supporters often "demonize" the police and the government.

Netizens called the report "the first time a major Western media outlet which used to be sympathetic to and supported the violence staged by rioters made a huge shift."

On the same day, the New York Times carried a story about the campus riot, saying that the nearly six-month-old protests "turned particularly violent" recently after rioters "disrupted transportation and the central business district and set fires on a college campus."

Some Western media have been reviewing the nature of the entire incident, as BBC quietly changed its description of the months-long protests from "pro-democracy protest" to "anti-government protest" in their recent stories.

Since last week, Chinese netizens have also been reposting a video of an interview between a Deutsche Welle (DW) anchor and Hong Kong protester Joey Siu on DW's Conflict Zone program on November 6, when the anchor fired sharp questions at Siu on rioters' radical violence against Hong Kong police officers' families and ordinary residents. But she failed to give a complete answer.

Netizens gave a thumbs-up to the anchor while mocking Siu for her "shoddy performance" as she kept saying something that did not make any sense.

More coverage of violence from Western media struck a blow to rioters who pinned their hopes on the Western world. And those rioters, mostly young students, will be discarded after being used by foreign countries and had their further education and future careers seriously affected, He said.

While more Hong Kong residents stepping out to say no to violence and voluntarily clearing the roads, the possibility that district council elections could be carried out as scheduled on Sunday increased, but more importantly, the rioters should stop their violence as soon as possible, He said.