A visitor takes a photo of migratory birds at an intertidal beach in Beidaihe, Hebei province. (Photo: China Daily)

SHIJIAZHUANG-Spiraling down to the wetland, dozens of white spoonbills began to dance elegantly or perch leisurely in the shallow puddles of Beidaihe wetland in the city of Qinhuangdao in northern China's Hebei province.

With temperatures falling, migratory birds including black-tailed gulls, pied avocets and common terns begin their long journey, heading south to spend the winter. Beidaihe is one of their favorite stopover sites along the route.

As an important hub on the migratory path between Siberia and Australia, Beidaihe welcomes large numbers of birds every year during the spring and autumn migration seasons.

"The wetland has witnessed the frequent appearance of seagull flocks this year and I have captured the scene with my camera more than once," said Hu Xiaoyan, a local birdwatcher with nearly 10 years' experience.

"It shows that years of effort in environmental protection are paying off."

Hebei, where economic development was dependent on heavy industry, was always affected by pollution. But now, habitats for both people and animals are improving as the local government speeds up the upgrading of its industries and develops tourism as a new economic engine. 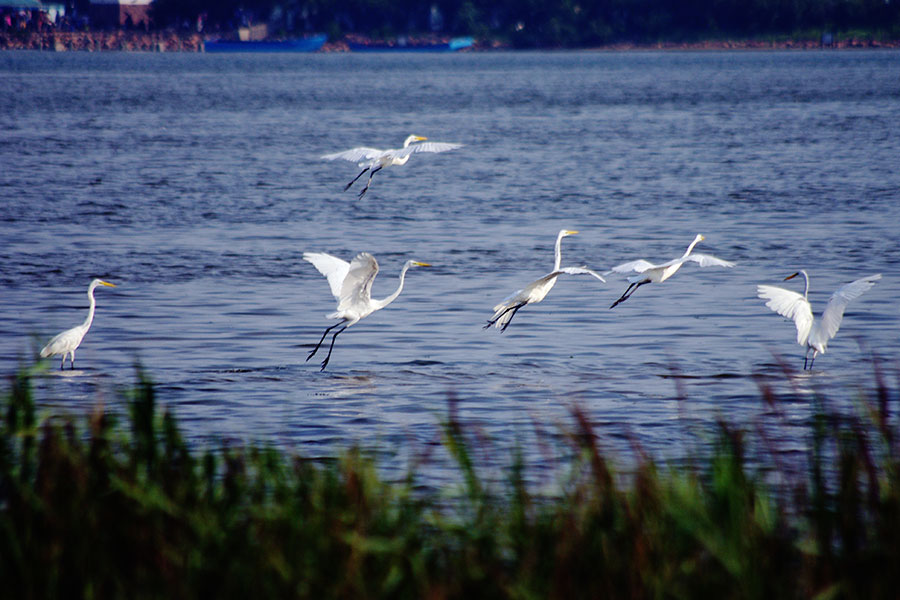 A flock of egrets flies over a river in Beidaihe. (Photo: China Daily)

As one of the most popular tourist destinations in Hebei, Qinhuangdao has adopted an ecology oriented approach and built itself into a model city for ecological development in the Beijing-Tianjin-Hebei area.

"With about 466,667 hectares of forest and 64,000 hectares of wetland, Qinhuangdao is home to more than 500 bird species, accounting for nearly 36 percent of China's total," said Liu Xuezhong, secretary-general of the city's birdwatching association.

To provide the birds with a more favorable habitat and to combat pollution, the local government has also taken a series of measures such as an all-out ban on fertilizers and the launch of large-scale afforestation.

According to Hu, the constantly improving environment in the wetland has attracted black-faced spoonbills this year, an endangered species picky about their surroundings.

"A conspicuous change can be seen here, with both the number of species and birds on the rise, which has attracted a large number of birdwatchers from home and abroad," Hu said.