CULTURE What a state

Euro giants no longer popular in the US 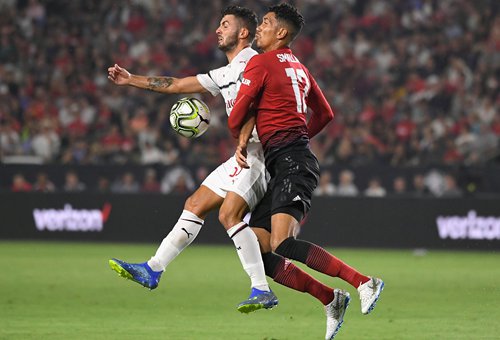 Patrick Cutrone (left) of AC Milan and Chris Smalling of Manchester United battle for a header during their International Champions Cup game on Wednesday in Carson, California. (Photo: VCG)

Both sides won their opening games of what has become the preeminent preseason tournament - United beat AC Milan on penalties in Pasadena after a 1-1 draw, the 28-shot shootout finishing 9-8 to United, while Liverpool beat Manchester City 2-1 in New Jersey.

It's becoming less strange to see old rivalries reignited in far-flung foreign lands, especially now most of the biggest clubs in Europe's big five leagues are happy to chase the sun and the significant sums of the ICC wherever it may take them.

This year there are no games in China - the only Asia destination on the global glad-handing circuit is Singapore - but the US is well accounted for as is Europe with 21 host cities divided between the two.

United played City last season in the first-ever Manchester derby to be played outside of the country. The NRG Stadium in Houston was the venue for a groundbreaking game - ground that would have been broken in Beijing a year earlier were it not for the unplayable surface at the National Stadium forcing the game to be canceled at the last minute.

No history to be made

Sunday will make no history, at least not in the sense of a new home for an old rivalry.

It is four years since United and Liverpool last met in the US, the Hard Rock Stadium in Miami playing host to a 3-1 victory for United. That game had followed United playing Real Madrid in Ann Arbor, the same venue where United and Liverpool will meet on Sunday, in front of a record crowd of 109,318.

Crowds are down this year, though, and as good as United vs Liverpool games have been in the past, there is nothing to suggest that Jose Mourinho and Jurgen Klopp can deliver enough to get the punters through the turnstiles.

The two games United have played in the States so far have been played out to less than half full houses, no matter what the official attendance has recorded.

The Milan game was moved from Pasadena's Rose Bowl to Carson's smaller StubHud Stadium to account for limited ticket sales.

The optics of a 91,000-capacity arena with so many empty seats would have done nothing to help convince people that the English Premier League and European soccer in general is booming.

As it was there were noticeably empty sections in the 27,000 stadium they shifted to.

Meanwhile, Liverpool vs Manchester City was neither a sellout of the 80,000 MetLife Stadium - it was 30,000 less than that - but the state of the pitch gave some indication as to how important this game was in the larger scheme of things.

A Taylor Swift concert meant that the grass was only put down the day before the match and it was a disaster of a playing surface before a ball was kicked.

Swift ruined the pitch at the MetLife Stadium.Mourinho has long been an advocate for competitive preseasons. It was he who used them to hit the ground running with his original Chelsea team to leave the rest of the league in their dust as they romped to the title. Everyone else saw the benefit thereafter and so the new normal was born. Not only would teams travel but they would meet clubs of a similar nature in order to ensure that competition was the highest possible to prepare for the season ahead.

The Manchester United manager has also been happiest in the States as opposed to the Far East. It was his first preseason with his new side when the Beijing game that never was should have been played and his fury at that is unlikely to have faded.

Last summer at the UCLA campus he looked at his most relaxed since moving to Manchester.

This summer is different, though. Mourinho has carried the furrowed brow and short temper that defined his second season at Old Trafford into this trip.

He has been noticeably vocal about the difficulties of being without his World Cup stars, while Alexis Sanchez - who has starred in his two appearances so far - was unable to travel to the States with the rest of the squad because of a visa issue.

Now Anthony Martial has jetted home for the birth of his child and many believe that the Frenchman has played his last game for the club.

It seems that love affair has ended, just as America's love affair with the Premier League is on the wane.

United face Real Madrid in Miami, while Liverpool leave having already played their other game when they lost to Dortmund in Charlotte, North Carolina last week to another crowd that was not a sellout despite the presence of Dortmund's American superstar Christian Pulisic.

Maybe they need to take a year off and skip the States next summer, instead head east and see if a year's break has made a ­difference to demand there.

If that's not the case then perhaps the demand for the Premier League product is not quite as big as we've been told.