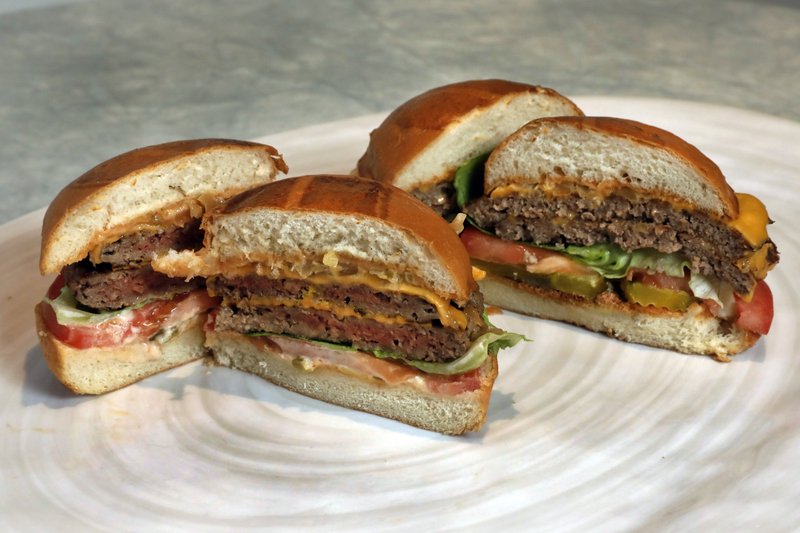 This Friday, May 3, 2019 file photo shows an Original Impossible Burger, left, and a Cali Burger, from Umami Burger, in New York. (Photo: AP)

What makes Impossible burgers possible? An engineered ingredient that makes the veggie patty look bloody — and one of many new concoctions food regulators expect to see more of in the coming years.

Several new vegetarian products are competing to win over meat lovers, but two California companies — Impossible Foods and Beyond Meat — are grabbing attention for patties that are red before they’re cooked, making them resemble raw beef.

The ingredient Impossible uses hadn’t been sold before, and regulators and the company disagreed about whether its purpose was to add color, or just flavor. The company’s cooked burgers have been in restaurants since 2016, but it wasn’t until July that the US Food and Drug Administration gave the OK that let Impossible sell its red, uncooked “beef” in grocery stores.

To replicate the taste of beef, Impossible Foods said it scanned plants for molecules that would mimic a protein in meat that contains iron and makes blood red. It eventually settled on something called soy leghemoglobin, found in the root of soy plants.

To make it, Impossible inserts synthetic versions of sections of soy DNA into yeast so the yeast produce soy leghemoglobin during fermentation.

“No plant is actually touched in the process of us making this protein,” said Smita Shankar, a biochemist with Impossible Foods.

The ingredient is supposed to be no more than 0.8% of the patty.

DO NEW INGREDIENTS HAVE TO BE APPROVED?

For many ingredients, companies don’t have to get FDA approval before putting them in food.

Companies and the scientific experts they hire can independently declare ingredients to be “generally recognized as safe,” or GRAS. They don’t have to tell regulators, but often do to generate confidence among investors and the public.

The FDA doesn’t technically approve a company’s GRAS declaration, but will issue a letter saying it has “no questions,” which is seen as agreement.

Impossible says soy leghemoglobin had “self-declared GRAS status” since 2014 when a panel of experts it convened declared the ingredient safe.

The company also later submitted a GRAS notification to the FDA that received a ”no questions ” response last year.

They don’t usually get much attention, but companies are constantly developing new flavors, sweeteners and other ingredients. As startups try to change the way food is made, including by replicating meat and eggs without animals, the regulators expect innovation to accelerate.

The FDA notes companies are responsible for ensuring the safety of their food and that it has the power to determine a substance is not safe. Still, groups including the Center for Science in the Public Interest and Environmental Defense Fund have criticized the system that lets companies make their own safety determinations.

A lawsuit by advocacy groups challenging the system is ongoing.

IS ‘BLOODY’ A LOOK OR A TASTE?

Unlike some other ingredients, new color additives have to be approved to be used in food. That led to a quibble between Impossible and regulators.

Impossible Foods has said the sole purpose of soy leghemoglobin is flavor. But the FDA noted the company’s own website said the ingredient contributes to the patties’ meat-like color. Impossible responded by removing such language, emails show.

The FDA still said soy leghemoglobin would need to be approved as a color additive for the uncooked meat substitute to be sold in supermarkets, since the red color would be part of the appeal.

The dispute was resolved after Impossible filed paperwork to get the ingredient approved as a color additive. The FDA approved that in July.

Beyond Meat’s patties, which have already been available in supermarkets, get their color from beet juice extract and their meaty taste from “natural flavors.”

Companies don’t have to specify what’s in them, but natural and artificial flavors are common in packaged foods. Natural flavors are also part of Impossible’s recipe.