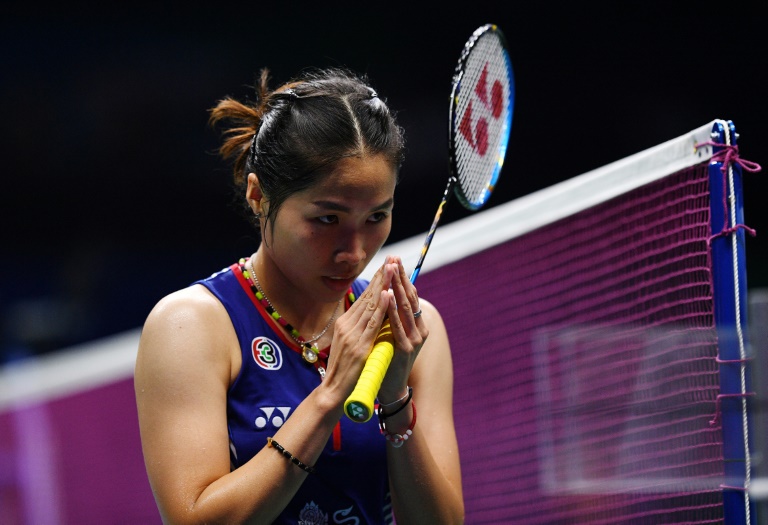 Ratchanok Intanon looked set to go out to the unseeded Mia Blichfeldt of Denmark, before recovering her poise to gleefully reach round three (Photo: AFP)

Japan's Kento Momota made a blistering start to his badminton World Championships on Tuesday -- then brushed off any talk of pressure.

The explosive 23-year-old is the man in form coming into the Nanjing showpiece and is tipped by many to win the tournament.

After swatting aside Ukraine's Artem Pochtarov 21-13, 21-12, Momota said: "I don't take the attention at home and abroad as pressure, but instead motivation."

"The first match was an easy win. I feel very good now and hope I can win all the matches. I want to win," Xinhua news agency quoted the sixth seed as saying.

In the women's draw, world number one Tai Tzu-ying of Taiwan eased through in her opener to underline her status as the woman to beat.

The top seed was never really in trouble against Hsuan-Yu Wendy Chen of Australia, winning 21-10, 21-16 to reach the third round.

Similarly untroubled were former number one Saina Nehwal of India, the 10th seed, and seventh seed Carolina Marin of Spain.

Ratchanok Intanon survived a major scare as the fourth seed battled back from the brink of a shock early exit.

Ratchanok, the 2013 champion and one of the favourites, looked set to go out to the unseeded Mia Blichfeldt of Denmark, before recovering her poise to gleefully reach round three.

A lacklustre Ratchanok went down 21-16 in the first game and was trailing for much of the second, losing 19-16 at one stage.

The 23-year-old appeared troubled by a right ankle or foot injury and called for her trainer as she stared defeat in the face.

But the former world number one stormed back to squeeze through the second game 22-20 and then raced away in the decider 21-10 after a nervy 76 minutes of action.