CULTURE What to watch for at this Sunday's Golden Globes

What to watch for at this Sunday's Golden Globes

Welcome to the 76th annual Golden Globes, where dramatic period pieces will vie for the top comedy-musical awards and song-stuffed movies are poised to dominate the dramatic categories. 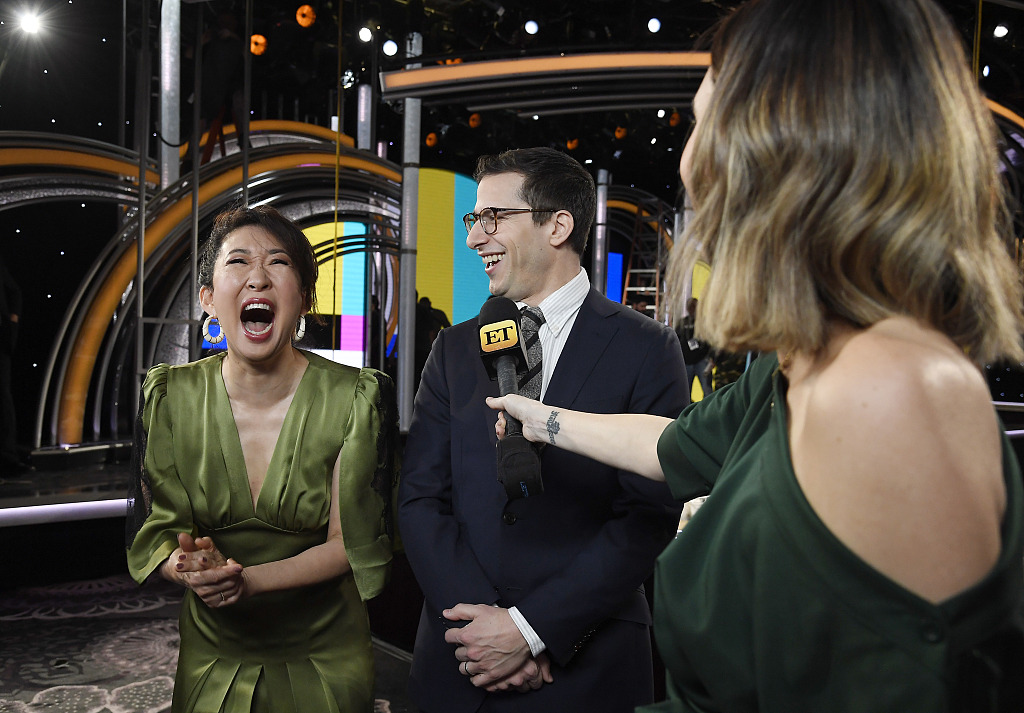 Sandra Oh and Andy Samberg, hosts of the 76th Annual Golden Globe Awards, are interviewed by the media in front of the main stage during a preview day at The Beverly Hilton Hotel on January 3, 2019 in Beverly Hills, California. (File photo: VCG)

Category confusion often reigns at the Globes. Remember when sidesplitters like “The Martian” and “Get Out” competed as comedies? But the Globes, reliably the frothiest, quirkiest and most entertaining stop in the awards-season march to the Academy Awards, might feel especially upside down this year.

The night, to be broadcast live Sunday on NBC, may ultimately belong to Bradley Cooper's “A Star Is Born” revival. It's the favorite for best picture (drama), best actress (Lady Gaga), best song (“Shallow”) and best actor (Bradley Cooper). The film's stiffest competition may come from another music movie: the Freddie Mercury biopic “Bohemian Rhapsody,” whose star, Rami Malek, some believe could pull off the acting upset over Cooper. 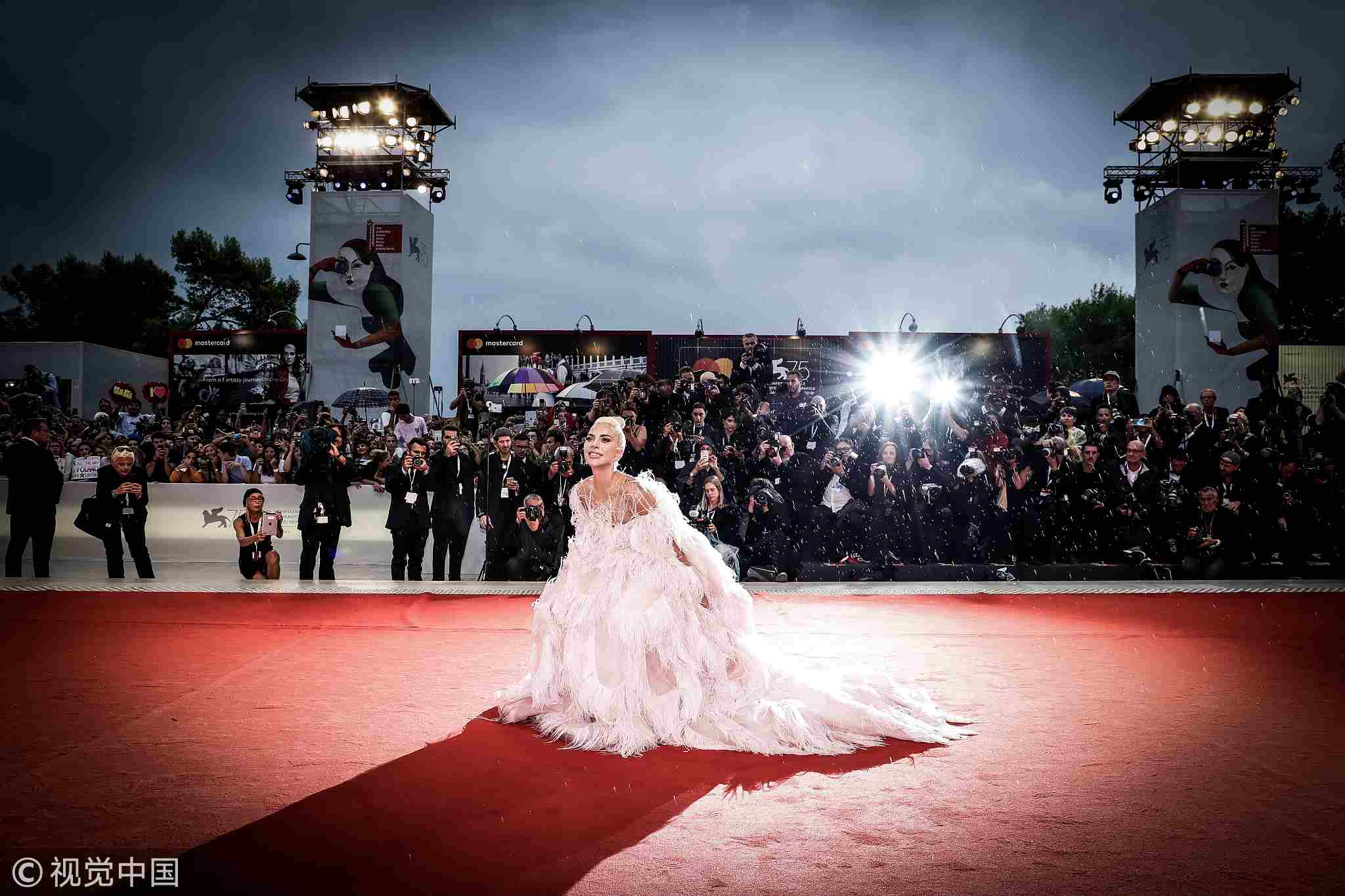 Lady Gaga walks the red carpet ahead of the "A Star Is Born" screening during the 75th Venice Film Festival at Sala Grande in Venice, Italy, August 31, 2018. (Photo: VCG)

Despite their copious tuneage, the campaigns of both “A Star Is Born” and “Bohemian Rhapsody” elected for the more serious dramatic category. For “A Star Is Born,” it's a kind of power move to firmly establish itself as the Oscar front runner many believe it is.

Oscar voting, as it turns out this year, commences Monday, the morning after the Golden Globes. If “A Star Is Born” runs away with the Globes, it will enter the nominations period of the Academy Awards as the favorite by a wide margin.

With "A Star Is Born" (along with "Black Panther," "If Beale Street Could Talk" and "BlacKkKlansman") up for best picture as a drama, that's left a few humor-tinged movies many would peg as dramas – “The Favorite,” ″Green Book” and “Vice” – to give the comedy/musical side of the Globes a bit more heft than usual. 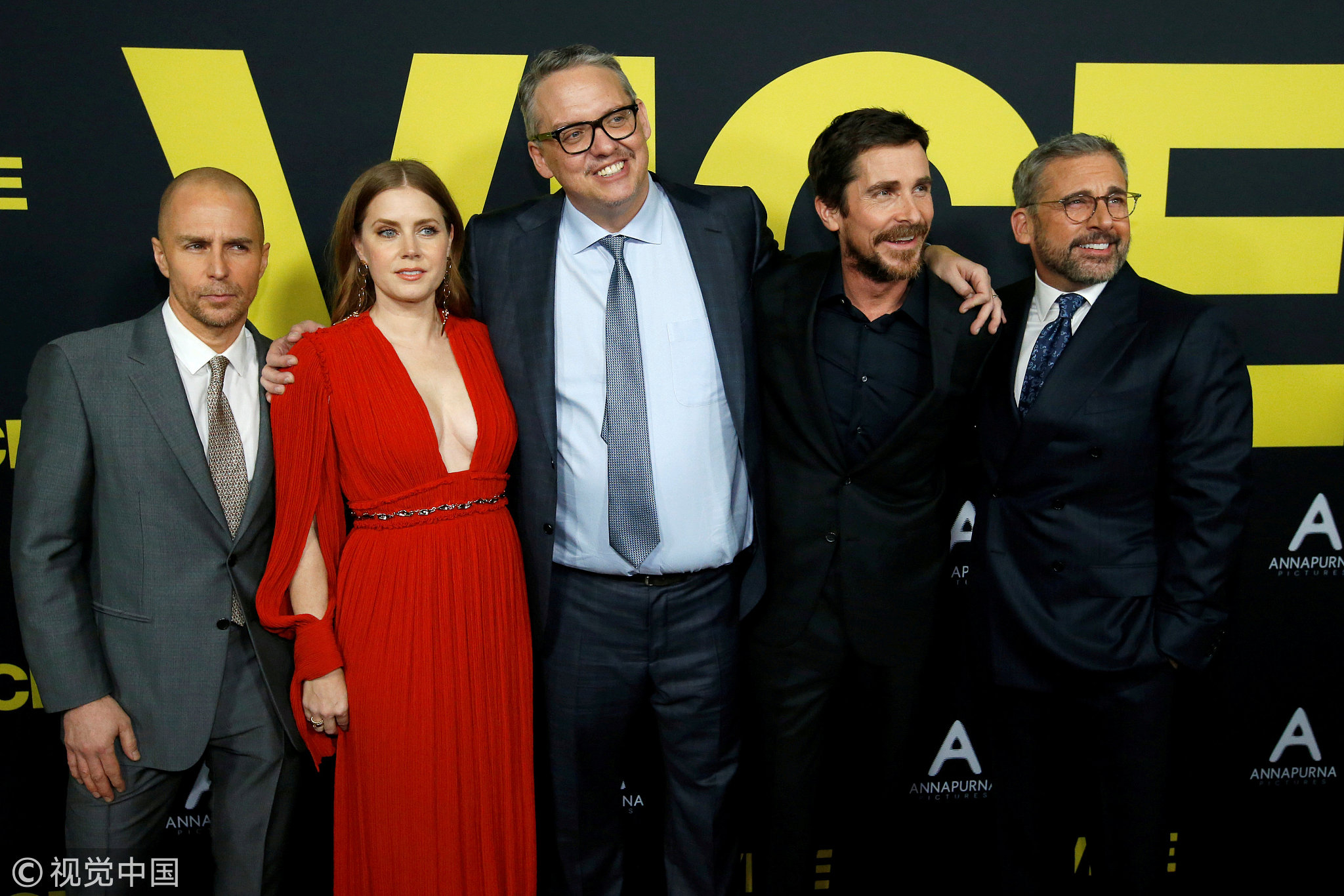 Of those, “Vice” comes in with the most nominations of any film (six), but the chances of “The Favorite” are probably the best on Sunday. “The Favorite,” Yorgos Lanthimos' triangular power struggle in Queen Anne's court, is the most decorated film of the bunch in an awards season that, despite any other fluctuations, has been rigid in its acclaim for the powerhouse trio of Olivia Colman, Rachel Weisz and Emma Stone.

Emily Blunt, nominated twice this year by the Hollywood Foreign Press Association (best actress for “Mary Poppins Returns” and best supporting actress for “A Quiet Place”) could give Colman – named the lead of “The Favorite” – a run for her money. But Colman's tragicomic performance as Queen Anne has made her the definite front-runner and potentially Lady Gaga's stiffest competition come the Oscars when the two best-actress contenders will presumably go head to head.

Other contenders for best actress in a musical or comedy include Chinese-American actress Constance Wu, who starred in “Crazy Rich Asians,” the first major Hollywood movie with an all-Asian cast for over a decade. Previously, Zhang Ziyi became the first Chinese nominated for the best actress in the drama category of the Golden Globe Awards for her performance in “Memoirs of a Geisha” in 2005. 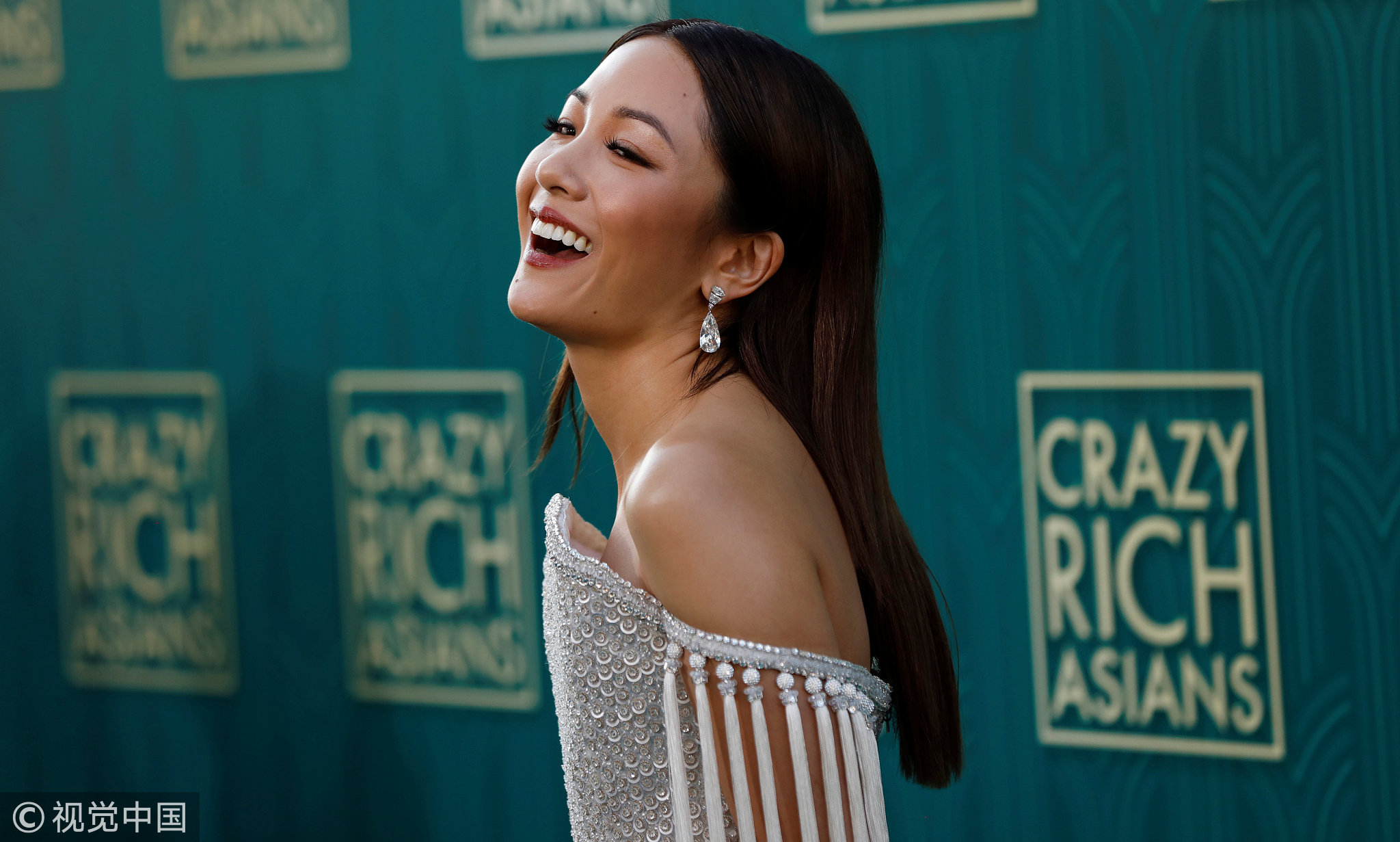 The awards season of “Green Book” has been marred by backlash, so Peter Farrelly's 1960s road trip tale probably has the most to gain from a strong showing at the Globes. The film's best actor (comedy) contender, Viggo Mortensen, may not be able to challenge Christian Bale's Dick Cheney, but the HFPA – which overlooked Mahershala Ali for “Moonlight” – may right that wrong with an award for his supporting performance in “Green Book.”

But if the lines of comedy, musical and drama are particularly blurred at this year's Globes, they are even more so between film and television.

There are as many movie stars nominated in the TV categories as there are in the film ones. Among them: Julia Roberts (“Homecoming”), Jim Carrey (“Kidding”), Amy Adams (up for both “Vice” and “Sharp Objects”) Michael Douglas (“The Kominsky Method”), Benedict Cumberbatch (“Patrick Melrose”), Penelope Cruz (“The Assassination of Gianni Versace: American Crime Story”), Patricia Arquette (“Escape at Dannemora”), Hugh Grant (“A Very English Scandal”) and Laura Dern (“The Tale”).

Their shows and others (“The Marvelous Mrs. Maisel,” ″Barry,” ″Bodyguard,” ″Killing Eve”) will be in the mix, and the victors may well muddy another awards show boundary: that between host and winner. Sandra Oh, the star of “Killing Eve,” is favored to win best actress in a drama series, potentially giving her a welcome respite from hosting duties alongside Andy Samberg. 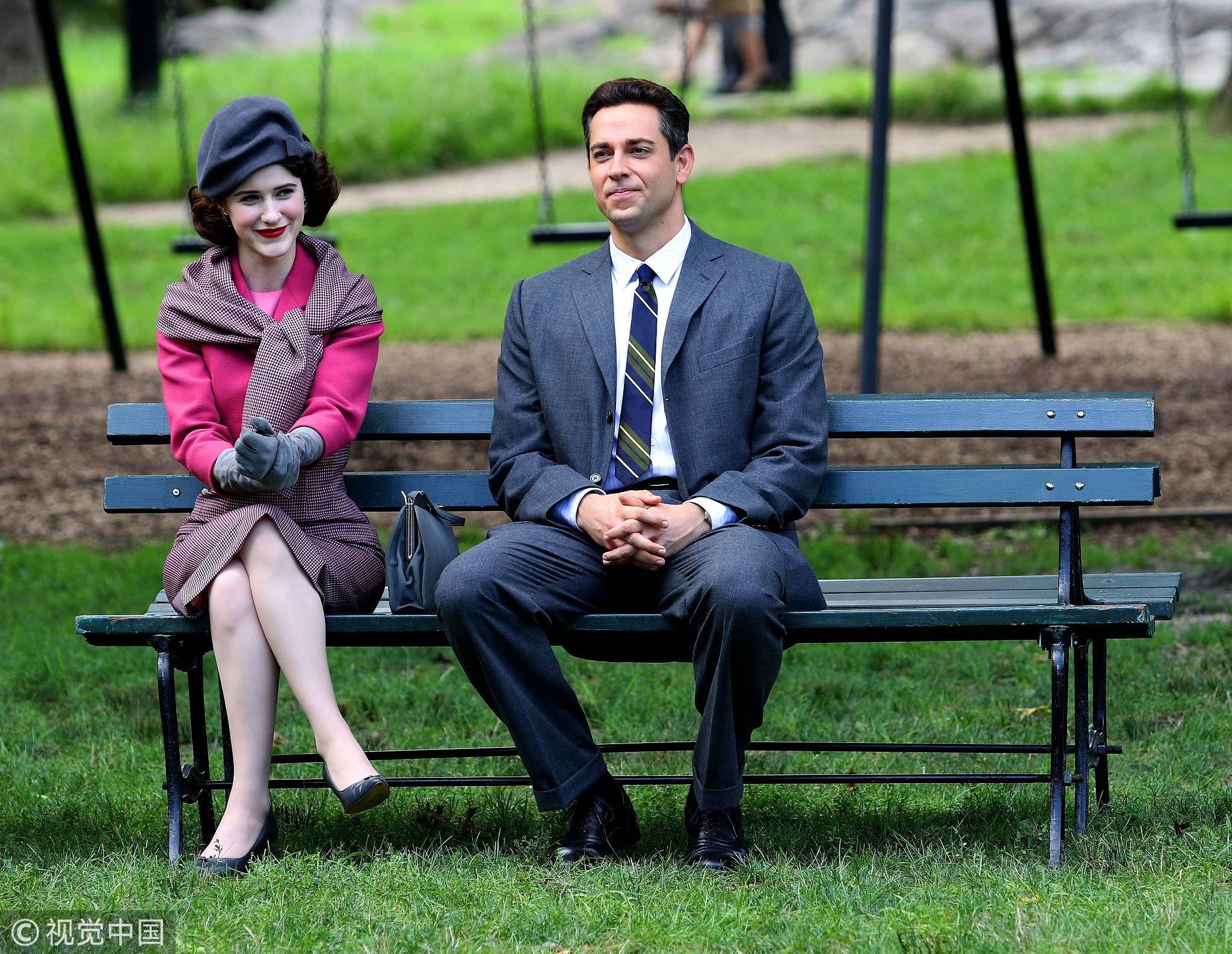 Oh and Samberg will have the challenge of marshaling a broadcast that last year fell 11 percent in viewership for NBC. That ceremony, when women attendees wore black, was atypically solemn for the Globes, and rife with protest, coming as the first major awards show of the post-Harvey Weinstein #MeToo era.

But for a Globes full of head-scratchers, Samberg and Oh – each hailing from different realms of comedy and drama – are a fittingly, charmingly incongruous pair.