CULTURE What will kitchens of the future look like? 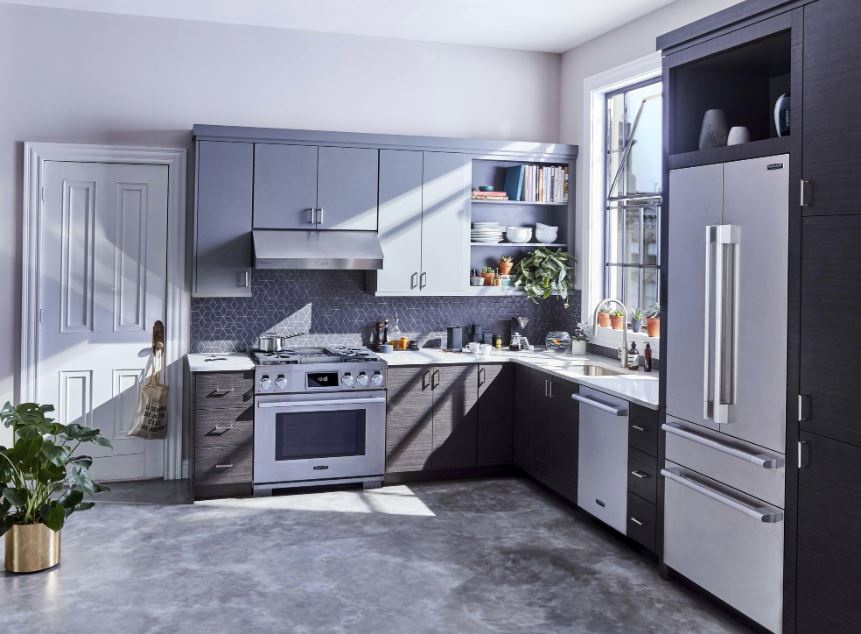 Today’s home kitchen doesn’t look anything like it did a century ago. But for the most part, it doesn’t look a lot different than 50 years ago.

Appliances are sleeker, materials are better, color palettes are broader. But the room is still the hard-working heart of the home.

At the upcoming Kitchen and Bath Industry Show in Las Vegas and the Architectural Digest Design Show in New York, insiders will get a peek at where we’re headed.

“Kitchens will continue to be gathering spaces, with dining nooks and multipurpose work surfaces where you can both roll your dough or type on your laptop,” he says. “But it’s no longer a universal truth that a dream kitchen must be an open kitchen. We’re seeing more and more people embrace doors and walls as they warm to the idea of the kitchen as a separate sphere, one that you can move in and out of over the course of the day.”

Andrew Shead, marketing manager for the appliance maker True Residential, doesn’t see open-plan kitchens going away. “But many of our high-end clients are adding a second kitchen to serve as a working kitchen,” he says.

Especially popular with those who entertain a lot, the backstage workhorse kitchen keeps messy prep out of sight, allowing the front-of-house kitchen to serve as more of a showy entertaining and gathering space.

Kitchen designers are incorporating fashion-forward features like glass fronts and LED lights on fridges, chic leather and metal hardware on appliances and cabinetry, and backsplashes with unusual finishes like shagreen, metal, raw wood or artful murals.

Tech is also the talk of the kitchen-design crowd. “The future of kitchen appliances is undeniably digital,” says Jon Hall, product and marketing director for JennAir.

“We’re already charging at a fast clip in that direction,” he says, noting that JennAir has developed over 110 new products with what he refers to as “an enhanced digital backbone.” That means dishwashers that respond to voice commands, and ovens that help craft a menu.

Both LG Signature Kitchen Suite and Miele are working on appliances that could communicate with each other to create shopping lists, meal recommendations and cooking instruction. Zach Elkin, general manager of Signature, says they’ve coined a term for the next generation of forward-thinking cooks: “technicureans.”

“These homeowners are far more tech-focused than previous generations. They’ve upped their culinary expectations to include precise prep and flexible cooking experiences, along with their desire for leading-edge design,” he says.

“I think we’ll only see smart kitchen technology become more sophisticated and easier to use,” he says. “Already there are products like Brizo’s SmartTouch faucets that turn on and off with just a tap. And companies like Samsung and Liebherr have developed refrigerators that feature integrated cameras that allow you to check your grocery stock from anywhere. I can imagine the day when your fridge will automatically order milk when you’re running low.”

But there has been some consumer pushback.

People still value reliability and performance most in appliances, Shead says, and “consumers have expressed concern about the technology quickly becoming outdated and unsupported in an appliance they expect to have for 10 to 20 years.”

True will focus more on advancing the production and design of kitchens rather than unnecessary smart tech in appliances that can actually hinder a product’s lifespan, he says.

“There is such a thing as smart tech simply for smart tech’s sake,” says Cochran. “I think the more extravagant ideas will be weeded out as the market course-corrects for functionality.”

Personalization is a trend everyone seems to agree on.

“People are so proud of their kitchens — they want them to be distinctive,” Cochran says. “So I think we’ll see people rewriting the rules. Fewer huge islands. More color. More tile. More character.”

He’s also not a fan of hiding a kitchen’s purpose.

“The idea that every counter must be constantly cleared and all appliances hidden is a thing of the past,” he says. “I once toured a kitchen with a bespoke cappuccino maker integrated into the fine millwork. I just thought, some day that machine will break or be replaced by a better model and you will have to rip out the whole mahogany wall. Enough is enough. Kitchens are real life.”