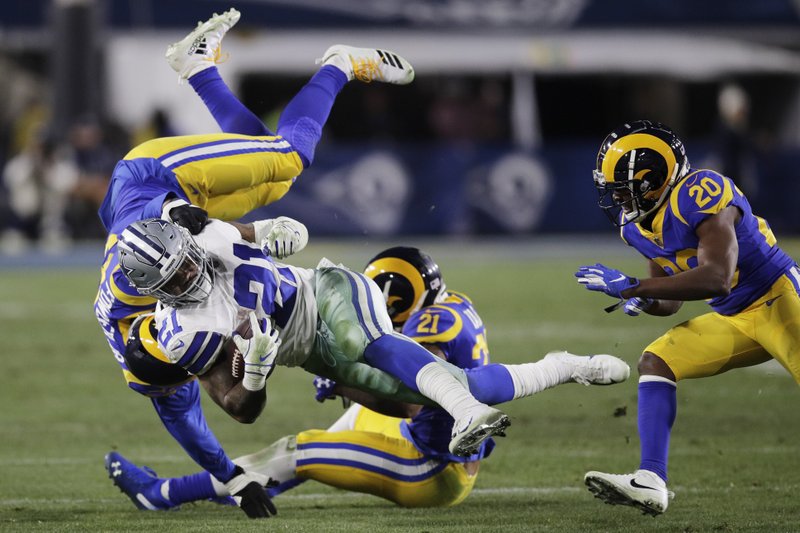 Late in his 13th NFL season, Andrew Whitworth finally got to savor his first playoff victory, albeit only for a minute or two.

After the burly left tackle briefly celebrated on the Coliseum turf with his wife and children Saturday night, he rushed back to the Los Angeles Rams’ locker room and reminded his teammates they’ve only completed a third of their postseason work.

The 37-year-old Whitworth and the Rams both ended lengthy playoff droughts with their 30-22 win over the Dallas Cowboys, and they realized the importance of their achievement without being satisfied by it.

After extending their second straight outstanding season to the NFC championship game, the Rams are determined to seize this chance to go even farther.

“It’s great, but you know what? I feel like this team has potential for more than that,” Whitworth said. “It’s a great feeling, and I’m happy to have it, but I didn’t try to get to the playoffs to just win a playoff game. I’m trying to win a Super Bowl. That’s the only focus, and now we’re one step closer.”

The Rams (14-3) took this step while following right behind Whitworth. The entire offensive line couldn’t have drawn up a sweeter scenario for this breakthrough win after they punctured the Cowboys’ defense for a franchise playoff-record 273 yards rushing.

That’s the most ever allowed in the postseason by the five-time Super Bowl champion Cowboys, who were playing in their NFL-record 63rd postseason game. Dallas was even coming off a wild-card round victory in which it largely shut down Seattle’s NFL-best rushing attack.

“I feel like we think we can run the football on anybody,” Whitworth said. “We were confident coming into this game that we could do it.”

After a decade of playoff disappointment with the Cincinnati Bengals, Whitworth agreed to join the Rams and a head coach four years younger than him last season because he believed something remarkable could happen in Los Angeles. The way Whitworth and his linemen manhandled Dallas (11-7) at the line of scrimmage was remarkable indeed: The Rams dominated on the ground from the opening drive to C.J. Anderson’s 1-yard TD plunge on fourth-and-goal with 7:16 to play.

Anderson rushed for 123 yards and two touchdowns, and Todd Gurley ran for 115 more yards and another TD to send the second-seeded Rams to the NFC championship game for the first time in 17 years.

The long-struggling Rams had won only one postseason game since their last trip to the Super Bowl in February 2002, but coach Sean McVay has added his first playoff victory to his spectacular two-season franchise turnaround. Los Angeles is one win away from another Super Bowl trip after McVay largely stuck to old-time football basics with his unlikely running back tandem and an offensive line determined to assert its superiority.

“It means a lot for this team,” said the 32-year-old McVay, the youngest coach in NFL history to win a playoff game. “That’s what’s special about it is to be able to see guys that have success, talking about a guy like Andrew Whitworth that’s been playing as long as he has. To see him play at the level that he played at tonight, and then to be able to get his first playoff win with these guys, I know he cares so much about and loves these guys.”

Next weekend, they will face the winner of the other divisional playoff game in New Orleans between the top-seeded Saints and the defending Super Bowl champion Philadelphia Eagles.

The Cowboys hadn’t allowed two 100-yard rushers in a playoff game since the NFL-AFL merger. Los Angeles racked up more yards than the Cowboys had allowed on the ground all season, a particular embarrassment for a proud, effective defense.

While Anderson and Gurley ran wild, NFL rushing champion Ezekiel Elliott managed just 47 yards and a touchdown on 20 carries. All-Pro defensive tackle Aaron Donald and Ndamukong Suh both had outstanding games, but the Cowboys blamed themselves for their inability to establish a consistent rushing attack, particularly against the Rams’ run defense, which had been spotty.

“They dominated us up front,” Elliott said. “We didn’t get any movement.”

Anderson joined the Rams last month as an emergency fill-in for Gurley, who injured his knee and missed the final two games. Anderson has a Super Bowl ring from Denver, but he also was released by the Broncos, Carolina and Oakland over the past nine months.

Anderson has played three games for Los Angeles, and he rushed for at least 100 yards in all three.

Gurley and Anderson became the fourth set of teammates in NFL history to rush for 100 yards apiece in a postseason game while Dallas gave up 200 yards rushing in a playoff game for the first time since Eric Dickerson did it for the Rams in 1986.

Dak Prescott passed for 266 yards and rushed for a TD with 2:11 to play, but the Cowboys couldn’t climb out after falling into a 23-7 hole midway through the third quarter.

The Cowboys still haven’t won a playoff game on the road in 26 years. After winning the NFC East and beating Seattle last week, Dallas lost in the divisional playoff round for the sixth consecutive time and fell short of its first trip to the NFC championship game since January 1996.

“It’s been a great season, all the ups and downs at 3-5 and being counted out,” Prescott said. “Just the way we were able to get back here was inspiring. We had a good team, and when you feel confident about that team and lose, it hurts. We’re a young team. We have a lot of guys with the right makeup to get back here and get to the next round.”