CULTURE Why are there so many African players on France’s national soccer team?

Why are there so many African players on France’s national soccer team? 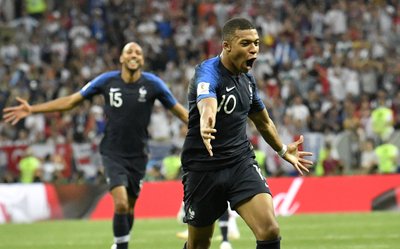 Paris (People’s Daily) – It was 20 years ago when France won its first World Cup title, and today they added a second title to their trophy list with 4-2 victory over Croatia. Cheering and shouting filled the street of Paris as fireworks popped in the background. With French flags unfurled, happiness and elation swept throughout the nation.

It harkens back to their 1998 victory when the French team was considered a symbol of harmony, a mixed nation where the alliance “black, blanc, beur” (“black-white-butter”) created a France team that won back then, and now today.

A wealth for France

The team’s coach and once former captain, Didier Deschamps, has never kept his pride hidden when talking about his team.

“France has players from Africa and elsewhere. And they have always been a wealth for football and for all French sports.”

The presence of Africans is nothing new for French sports. For decades, the French have referred to sports as a “black affair.”

According to French sports researcher Claude Boli, the historical link between France and various African countries once under French control had a major influence on athletes immigrating to the country.

The first African players arrived in France 1930 before their respective nations gained independence. The most famous at the time was Larbi Ben Barek, the “black pearl” who would play his first match on French team before becoming a citizen.

France took advantage of its colonial influence to attract the best African players for its championship run, although the phenomenon remains marginal given the limited financial interests in football prior to decolonization.

Once African countries gained their independence, the trend slowed until the 1980’s when it began to surge. At the same time, African countries used the overflow of their players as an opportunity to improve their national team selections.

Today, there is a growing market liberalization for football players. One thing that contributed to the growth was The Cotonou Cooperation Agreement from June 2000, and agreement between France and the top African nations that provide the best players such as the Ivory Coast, Senegal, Mali, Cameroon, while at the same time has facilitated newer arrivals.

During this growth, the number of football academies in Africa increased. Back then and even today, the schools are typically established by African soccer players who have played in Europe, such as Jean-Marc Adjovi-Bocco.

Training African players is less expensive. African soccer teams cost well below the European market average. The players are therefore “cheaper” and stand a bigger chance of getting picked up by a professional European club. This process is necessary for many French teams whose financial equilibrium depends on acquiring outside sources for capital gains.

The physical attributes of African players are particularly suited for soccer. Known as a game for the poor, it is a favorite activity for children growing up in underdeveloped countries. Besides, the common language, considered a cultural factor, also makes it easier for West African and Maghreb players to integrate in France.

It should be noted there are not many East African or Southern African footballers, countries where English is spoken, that play for a French team.

For the African players, living the life of a successful soccer player attracts unbalanced media coverage that emphasizes the success of the best players, while ignoring failures.

The athletes’ status within society is of high value, both financially and socially. Playing soccer allows them to fulfill their migratory dreams of climbing up French social ladders. Thousands of young African footballers arrive in France every year with aspirations of having a professional sports career.