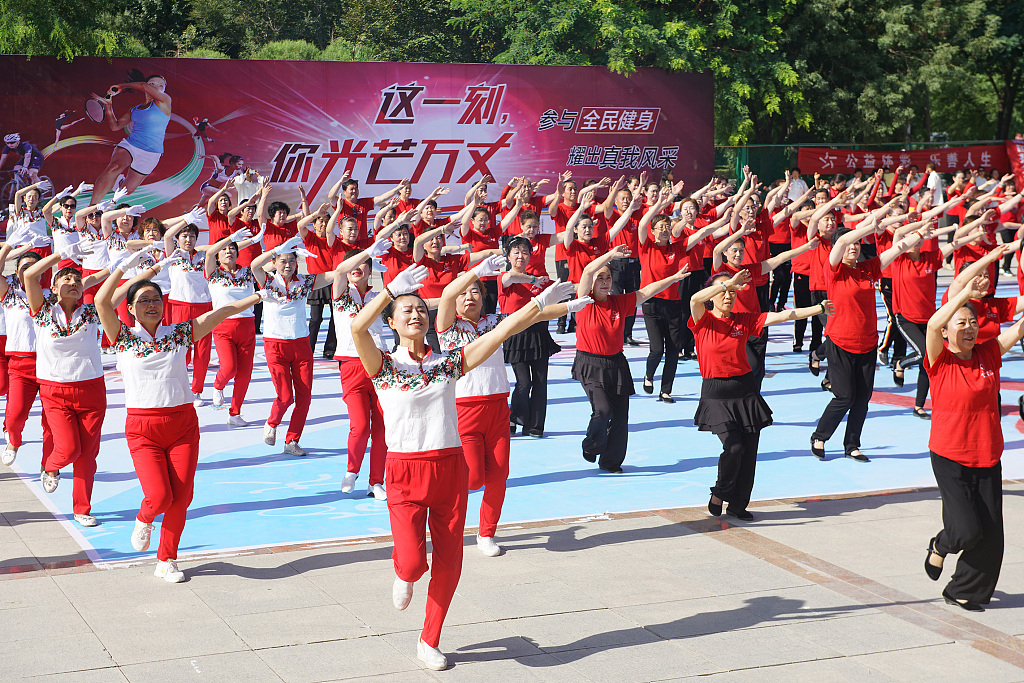 As a heritage of the 2008 Beijing Summer Olympic Games, the Chinese government has designated the day of the grand opening ceremony, August 8, as the "National Fitness Day".

More and more Chinese people are trying to put the spirit of "Fitness Day" into their daily lives, in the context that China's sports career developed rapidly in recent years.

People love square dance, yoga, marathon, Tai Chi, and on and forth, which are not that difficult to practice and can quickly help them maintain fitness.

There are some statistics to demonstrate this improvement:
In 2018, the number of Chinese people regularly taking part in sports training reached 550 million, a 210 million increase compared to a decade ago.
In 2005, China had 850,000 sports venues, but by the end of 2017, the number exceeded to 1.95 million.
Urban residents' spending on personal fitness is increasing by 30 percent per year, significantly higher than the global average of 20 percent.
And one of the most evident changes in China's national fitness area was witnessed from 2010 to 2018, the number of marathons events held in China augmented over a hundred times, from 13 to 1,581.

The enthusiasm for playing sports and the raising of China's comprehensive national strength affect one and other.

As participating in sports activities is now becoming a lifestyle for a big part of Chinese people – they would search for more scientific coaching, use more professional facilities, and spend more money on all aspects of the sport.

Apart from the spontaneous individual actions, the Chinese government also took sports as an essential part of compulsory education, as on June 24, 2019, they formally released the Opinions on the Execution of the Healthy China Action, which proposed health-encouraging actions at the school level.

The 2008 Beijing Summer Olympic Games enlighten China's sports fever, and its lasting passion made Beijing get the right again to host the 2022 Winter Olympic Games.

During the last decade, China well made those venues be used at best like to host multiple commercial activities. And under the conduct of reducing venue construction, they did such kind of things like changing the "Water Cube" into "Ice Cube" to adapt to the upcoming event.
Besides, the development of technology is breaking more limits to experiencing sports, as through some stimulators, people could enjoy the fun of playing sports not necessarily in special places.

With those trends, national fitness could be promoted better and better. Meanwhile, it will make more Chinese people have a good health condition, extend their life expectancy, create more sports-related jobs, and finally help the country develop sustainably.