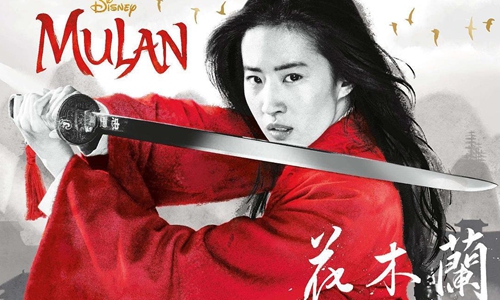 Disney’s live-action movie Mulan doesn’t need to worry about being discussed these days across the world. Following Mushu, Cri-Kee and Shan Yu, Li Shang, one of the key roles in the 1998 animated original story, was also removed from the upcoming movie.

Its producer Jason Reed explained that “having a commanding officer that is also the sexual love interest was very uncomfortable and we didn’t think it was appropriate.” The explanation has angered many fans of the original story, calling the decision “dishonoring of you.”

Reed said they spilt Li into two characters, Commander Tung, serving as her surrogate father and mentor, and Honghui, who is still Mulan’s love interest.

But these explanations don’t bring much debate and discussions to fans in China even though it is based on a Chinese story.

Different from strong objections toward Disney’s choice in “cutting the kissing scene,” Chinese followers on Twitter-like Weibo said as long as the storyline makes sense and is appealing, it is understandable for Disney to make changes including removing and adding new roles. Otherwise, it will be boring to see a re-screening of the original animated story, performed by live actors.

As a movie lover, I am pleased to see interpretations of Mulan’s story in various attempts from studios like Disney. Because we Chinese know that as a fictional story, Mulan is not China’s story any more since the first animated one.

We Chinese, who can recite the ballad at a young age, all know that there is no Mushu, no General Li and even no love plots in the original, which only tells Hua Mulan disguised as a man and taking her aged father’s place in the army.

However, differences with the original story didn’t keep us from enjoying the animation very much and re-watching it from time to time.

The recent moves and changes for the live action version walk too far that we or most of us can’t catch up. From cutting kissing scenes to removing Li Shang, they are all made due to some “political correct” reasons, or at least their regional office and producers thought so.

Why didn’t Chinese fans criticize such lame excuses to cover up their decisions? Because they are tired. It is a Hollywood movie with Hollywood narrating and setting, only coating with a Chinese lead actress and a framework of China’s story.

We knew it and gave up to speak out and let them know about China’s side. That advice would definitely not be to “cut kissing scenes.”

Frankly speaking, it is still questionable that Mulan would be able to make it to screens on March 27 due to the outbreak of COVID-19 outside China. If not, that may be good news as well, that Disney would have more time to edit the $200 million movie to make everyone happy, especially minors.