CULTURE Why do zebras have stripes? Perhaps to dazzle away flies

Why do zebras have stripes? Perhaps to dazzle away flies 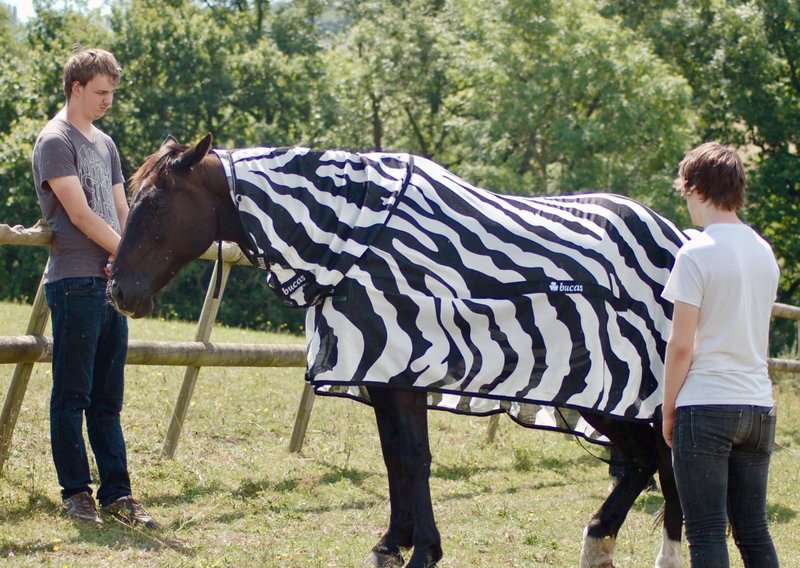 The researchers found that fewer horseflies landed on the bedecked horses than on those without the striped coats, suggesting that zebra stripes may offer protection from blood-sucking insects that can spread disease.

“This reduced ability to land on the zebra’s coat may be due to stripes disrupting the visual system of the horse flies during their final moments of approach,” said Martin How, a research fellow at the University of Bristol. “Stripes may dazzle flies in some way once they are close enough to see them with their low-resolution eyes.”

From a distance, the flies were equally attracted to both horses and zebras, with the same number of insects hovering around both types of animals. But when the flies got closer, things get dicey. The flies landed less frequently on the zebras and the horses covered in striped coats.

“Once they get close to the zebras, however, they tend to fly past or bump into them,” said Tim Caro, a professor in the U.C. Davis Department of Wildlife, Fish and Conservation Biology. “This indicates that stripes may disrupt the flies’ abilities to have a controlled landing.”

The work , reported in the journal Public Library of Science ONE, seeks to answer one of the oldest questions in zoology — why do zebras have stripes? Charles Darwin had his theories. So did British naturalist Alfred Russel Wallace.

But the scientists from Britain and California sought to examine that question by studying both horses and zebras at the Hill Livery in Britain, which works with zoos in Europe on conservation for zebras. That provided a controlled environment where the horses could be dressed up and closely observed to test the theory.

“It’s one of those pieces of research that you say, ‘why hasn’t someone done this before?’” said Tim Woodfine, the director of conservation at Marwell Wildlife in southern England. He did not take part in the study. “It’s simple and neat. I think it’s a great piece of work,” he said.

How, an expert on animal vision, told The Associated Press on Thursday that there are reasons to be “quite excited” about the research, which helps scientists understand what’s happening in the mind of a fly. This has broader implications in terms of technology such as driverless cars, which are inspired by insect vision. If stripes disrupt a fly, they might also possibly disrupt a driverless car’s systems, for example, he said.

“What we needed to do is get our mind into the eye of the fly,” How said. “They have very different eyes from us.”

Erica McAlister, the senior curator of flies and fleas at the Natural History Museum in London, said the research helps add more understanding to a subject long debated in the science community.

“We’ve been arguing about zebra stripes for 75 years,” said McAlister, who was also not involved in the study. She said that the study will provide useful data going forward.

But there are also human applications. How says from now on, he’s wearing stripes while riding his bike during horse-fly season.

Caro hopes that the study will underscore the wonders that remain to be discovered in the natural world.

“If we can try to peak the public’s appreciation of the wonders of nature, they’ll be less cavalier about destroying it,” he said. “That’s my hope.”