CULTURE Why mouth-watering Peking duck has a bright future

Why mouth-watering Peking duck has a bright future 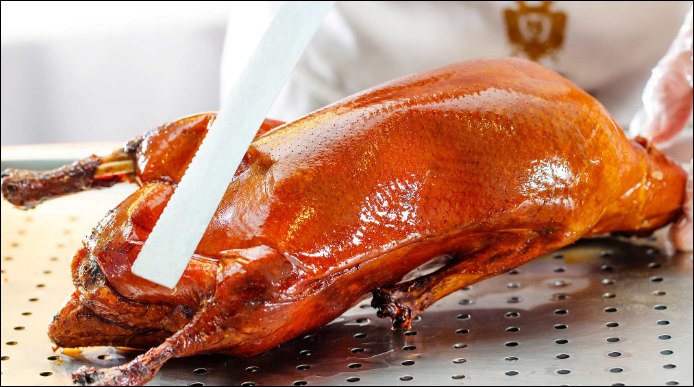 Traditionally, there are two ways of cooking a Peking duck: the hung oven roasting -- featuring pleasant smell of fruit wood and crisp skin and the closed oven roasting -- which means tender and juicy meat.

From choosing, preparing, drying to slicing a duck, more than 20 steps have been elaborated in the guidebook for cooking a Peking duck under both methods.

Items that are usually served with Peking duck, including lotus-leaf-shaped pancake, cucumber sticks, shredded onion and white sugar, are also specified in either weight or amount.

Setting standards for Peking duck cooking is the first step in doing the same for other popular dishes of the Chinese capital, Yun Cheng, president of Beijing Cuisine Association told Beijing Daily.

He said it helps protect the identity of Peking duck and the Beijing cuisine at large, and paves the way for innovation and development of local delicacies as well.

If you are visiting Beijing, Peking duck is a delicacy you must not miss. Here are some suggested restaurants famous for making the best Peking duck.

Quanjude made the first hung oven style Peking duck in 1864. After the founding of the People's Republic of China in 1949, the restaurant played an important role in the foreign affairs arena as its Peking duck became a favorite of many foreign leaders, including the late Cuban leader Fidel Castro, former Vietnamese President Ho Chi Minh, and Former US Secretary of State Henry Kissinger.

Bianyifang is a 600-year-old brand, dating back to the Ming Dynasty. It is known for cooking Peking duck in closed oven style. In recent years, the restaurant has developed an award-winning Peking duck dish by immersing the duck in vegetable juices, which improves its taste and nutrition.

At the end of 2017, Peking duck leader Dadong made  headlines when it opened its first overseas restaurant in Manhattan. According to New York Times, within two hours after its online reservation opened, the earliest reservation for the 440-seat restaurant was two months later.