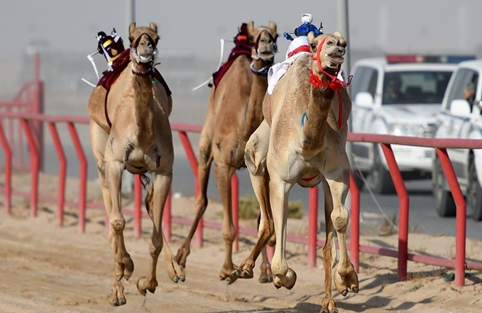 Another four wild Bactrian camels have been released into the wild in northwest China's Gansu Province, according to the Dunhuang West Lake National Nature Reserve Administration.

"While the male camels released in the first attempt showed strong fertility and adaptability in the wild, they also caused problems such as destroying monitoring facilities and attacking humans when they come into oestrus," said Sun Zhicheng with the reserve.

"So this time we decided to release them further away," Sun added.

The four wild camels were released into the mountainous region in the southern part of the reserve, which borders the Kumtag Desert, in late November. GPS data showed they now have reached the hinterland of the desert.

The Wild Bactrian camel is listed as critically endangered by the International Union for Conservation of Nature.

China has established nature reserves in Xinjiang and Gansu to protect wild Bactrian camels since the 1980s.

According to the reserve, the population of wild Bactrian camels is on a steady rise. The largest herd detected in the reserve had 48 wild camels.