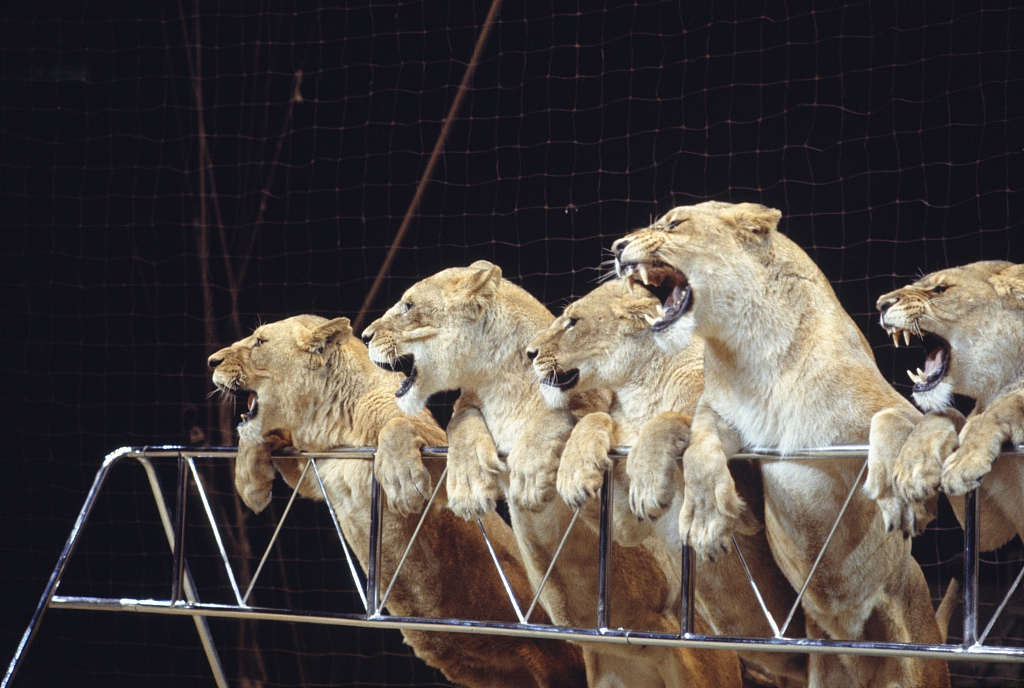 A file of lions performing on stage. (Photo: VCG)

A wildlife park in east China's coastal city Qingdao announced on Wednesday that they would put an end to the animal performances previously featured as part of the entertaining program.

Qingdao Forest Wildlife World, housing more than 5,000 wild animals in 263 species, said that they had canceled animal performance forever, and will introduce projects and lectures for popularizing scientific knowledge about the wildlife and their protection.

There will be no more black bear's wire-walking or monkey's bicycle-riding, the park announced. Instead, animals rescuing from the wild will be part of a new project, which allows them to act by their instinct in a bionic environment.

The park will also launch a project called "Lecture on Animals", which will be aimed at conveying information about the wild animals and instruct the public to care and protect them.

The announcement was made on the day marked as the Earth Day, designated by the UNESCO and celebrated annually on April 22. It, therefore, conveys more meaning than just a new rule of a local park.

Li Huanbin, director of the park's planning department, said that the new move is not only to show respect to the animals but also the park's only way back to its original intention of public benefit.

"During our transmission, we expect that more people could join in to protect the animals, and we'll try our best to build the wildlife world into a base of harmonious co-existence for human beings and animals," said Li.

They belong to the wild, not to the stage

The wildlife park's decision wins the heart of millions of Chinese netizens, who have been calling for a halt to such performances for years. Since the outbreak of the coronavirus, the campaign has been brought up again, with more asking for more space and respect for the animals as well as mother nature.

On China's Sina Weibo, the Twitter-like social media platform, the topic "put an end to animal performance" has already garnered over 10 million exposures. Many left comments, saying that the Qingdao park should be set as an example for the wildlife parks, zoos, circuses and other venues featuring animal performances around the nation.

"The scientific knowledge about wildlife is more worthy of promotion than animal performance. Give them back their free space and environment," a Weibo user wrote to comment on the news.

"I think it should be done a long time ago. Every time I saw a crowd of people watching the elephant performing, I felt sorrowful, and yet can do nothing to help but urging my friends to leave the spot. It should be promoted across the country," another Weibo user wrote.

"I hope the aquariums could come up with similar decisions to stop the animal performances," another netizen suggested.

In 2015, the Chinese Cetacean Alliance, an NGO aiming at protecting the cetacean animals, issued the first report on the living condition of the cetacean in captivity. The report showed at that time, there were at least 39 aquariums in 17 provinces and municipalities have 491 cetaceans. Among those, 36 of them have animal performances.

The physical and mental conditions of those animals suffered severe damages, and their lifespan could be shortened by as much as two-thirds of the original length. Similar damages have been caused to other animals forced to perform.