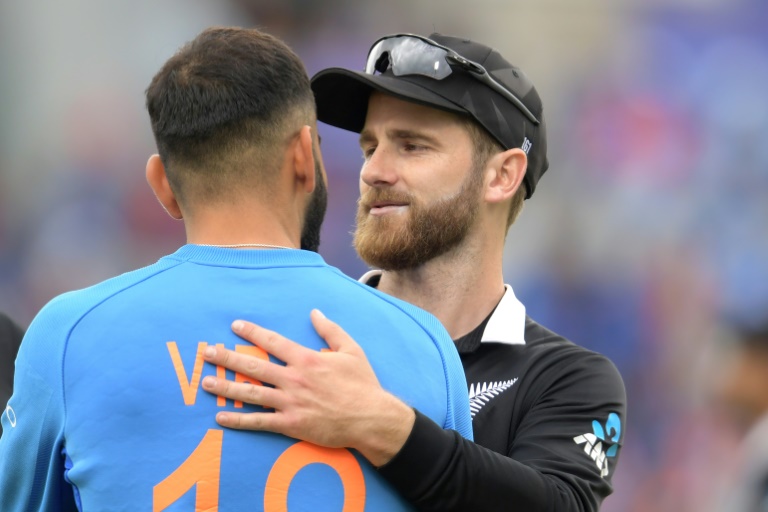 In a semi-final that went into a second day because of rain, New Zealand ripped through India's top-order on Wednesday to reduce the two-time former champions to 24 for four.

Matt Henry and Trent Boult did the damage with the new ball as India's top three of Rohit Sharma, -- who came into match having hit a record five hundreds at a single World Cup -- captain Virat Kohli and KL Rahul all fell for a single apiece in pursuit of a seemingly modest target of 240.

Henry finished with superb figures of three for 37 from his maximum 10 overs and Boult two for 42.

"A brilliant fighting effort from our guys on another tough surface," Black Caps skipper Williamson said.

"We wanted 240, 250. Then to have the start with the ball we had was an outstanding way to kick things off and get us into a position of strength."

Williamson's 67 in awkward batting conditions on Tuesday, together with fellow senior batsman Ross Taylor's 74, had provided the cornerstone of New Zealand's 239 for eight.

India were in dire straits in their chase when all-rounder Ravindra Jadeja came in at 92 for six.

But he went on to make 77 and share a World Cup record seventh-wicket partnership of 116 with veteran wicketkeeper MS Dhoni, who made 50 in support.

"The innings Jadeja played, it was like he was playing on a different wicket, really. He timed the ball beautifully well," Williamson said.

Asked what he was thinking when he caught Jadeja, the smiling captain answered: "Someone goes 'catch it' and it's sort of... it's above me so it must be mine."

New Zealand came into this match on the back of three straight group-stage defeats by Pakistan, Australia and England.

They qualified fourth on net run-rate while India topped the 10-team group table, making them heavy underdogs against one of the pre-tournament favourites.

"We've seen that anybody can beat anybody," said Williamson, who will now look to lead New Zealand to their first World Cup title against either champions Australia -- the team that beat them in the 2015 final -- or hosts England at Lord's on Sunday.

When it was suggested that New Zealand had plunged billions of India fans into a state of mourning, the understated skipper, who has captained the Sunrisers Hyderabad in the Indian Premier League, replied: "I hope they're not too angry.

"Obviously, the passion for the game in India is unrivalled and we are all fortunate to play this sport and have a country like India be right behind it.

"But hopefully we can adopt 1.5 billion supporters and they'll be supporting us, what do you reckon?

"The game of cricket is fickle in its nature especially when it comes to the white ball and Twenty20 and one-day cricket.

"Today perhaps some of those small margins went our way and it was great that we could get across the line and beat a very strong side."