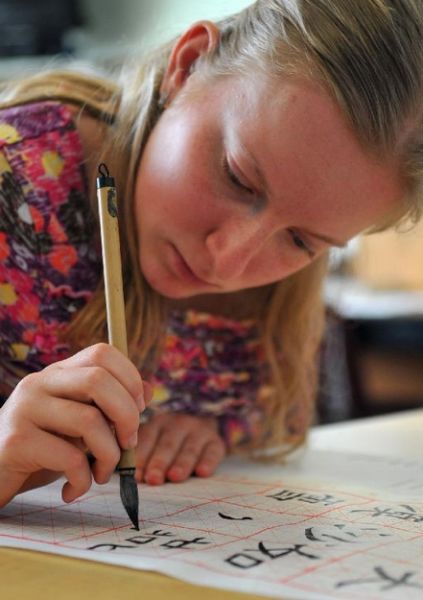 They were the winners who had emerged victoriously from the annual contest held here last month, which saw the participation of more than 1,200 students from the Bay Area and other regions as far as Napa County, California's famous wine county about 108 km north of San Francisco.

Contestants ranging from kindergarten children to 12th graders in Northern California competed against each other in Chinese language proficiency, brush and pen calligraphy, painting and drawing, Chinese composition, as well as Chinese poetry recital.

"The involvement of more students from elementary and high schools in Northern California in the contest of Chinese language and artistic talent will encourage them to seek further education in universities in the future," he said shortly before the awards ceremony.

The more the students get engaged in the competition, the sooner they would find access to the resources of higher educational institutions, which would help them to grow into highly competitive, widely sought-after talents, Xie said.

The contest, which has been held over the past 15 years in partnership between the SFSU Confucius Institute and the San Francisco Unified School District (SFUSD), provided a platform for the students to not only showcase their academic results but also to make more friends, he said.

The Chinese Consulate General in San Francisco gave a lavish banquet Thursday night in honor of the American and Chinese American students and their parents for their diligence and hard work in learning the Chinese language and culture.

Chinese Consul General Wang Donghua said it is important to learn the Chinese language because it will increase the students' career prospects in the future.

"China is a country with a population of 1.4 billion, which is full of opportunities, and its development will generate more potential if one can speak Chinese," he said.

Monika Connolly was very proud of her elementary school daughter after she won the first prize in a Chinese poetry recital contest.

She said her family had lived in Shanghai for three years, and even though they don't speak Chinese at home, she wants her daughter to continue learning the language.

After they returned to California, Connolly said, she put her daughter in a Mandarin immersion program.

"I think to learn a second language besides English is good for a lot of reasons, career-wise, educational-wise and for her future," she said.

William Newby, director of a software platform at a biochemical startup company in California, said it was really fun to see how much the children have learned and witness the cultural exchange.

He said his daughter, Ella, has just taken Mandarin for one year in kindergarten, but she has learned a lot and she was excited to come and perform in front of other students.

As for Ella's Chinese studies, he said that they might benefit her in the future.

"We have a world that comes closer together and there's more culture and business opportunities for her in China," Newby told Xinhua.

Enikia Ford Morthel, deputy superintendent of the SFUSD, praised the children for their perseverance and resilience in spending time on learning a new language and art forms.