CULTURE With a nudge from the young and sober, mocktails taking hold

With a nudge from the young and sober, mocktails taking hold 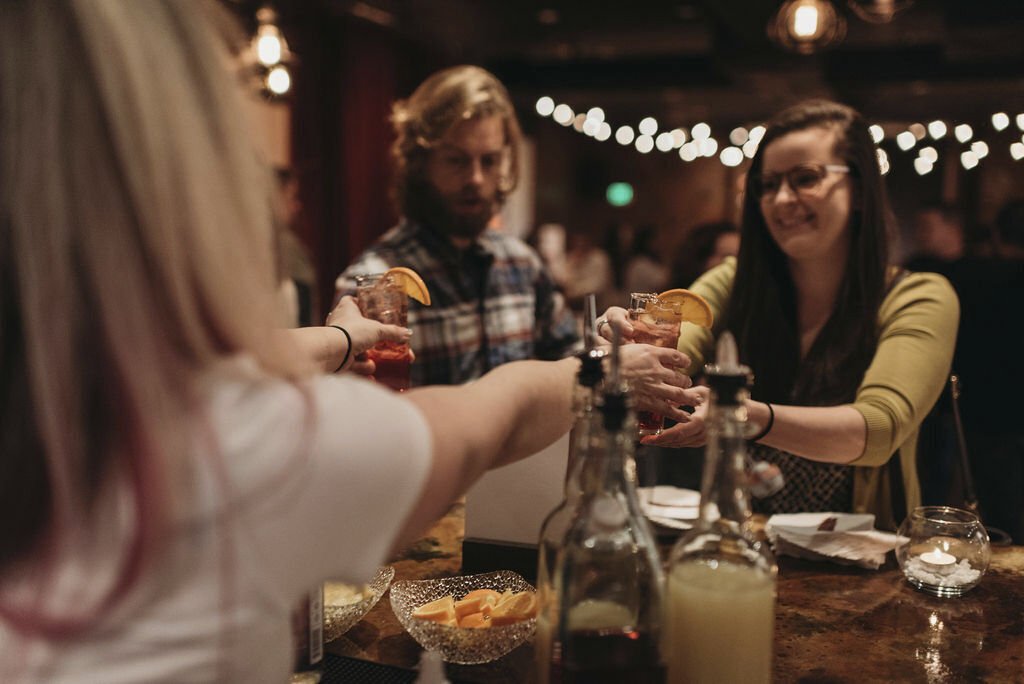 In this Jan. 17, 2019 photo, a bartender serves patrons Rae of Sunshine mocktails at Sans Bar pop up bar at The Factory Luxe in Seattle, a Marnie Rae launch party for National Mocktail Week. (Photo: AP)

Five years ago, for her 27th birthday, Lorelei Bandrovschi gave up drinking for a month on a dare. She was a casual drinker and figured it would be easy. It was, but she hadn’t banked on learning so much about herself in the process.

“I realized that going out without drinking was something that I really enjoyed and that I was very well suited for,” she told The Associated Press. “I realized I’m a pretty extroverted, spontaneous, uninhibited person.”

And that’s how Listen Bar was born on Bleecker Street downtown. At just under a year old, the bar that Bandrovschi opens only once a month is alcohol-free, one of a growing number of sober bars popping up around the country.

Mocktails aren’t just proliferating at sober bars. Regular bars and restaurants are cluing into the idea that alcohol-free customers want more than a Shirley Temple or a splash of cranberry with a spritz.

Alcohol-free mixed drinks grew 35 percent as a beverage type on the menus of bars and restaurants from 2016 to this year, according to Mintel. Topper said 17 percent of 1,288 people surveyed between the ages of 22 to 24 who drink away from home said they’re interested in mocktails.

The interest, she said, is also driven in part by the health and wellness movement, and higher quality ingredients as bartenders take mocktails more seriously.

“It really started a few years ago with the whole idea of dry January, when consumers cut out alcohol for that month,” Topper said. “It’s shifted to a long-term movement and lifestyle choice.”

Listen Bar recently hosted a mocktail competition for mixologists, who whipped up drinks that included The Holy Would, comprised of citrusy, distilled, non-alcoholic Seedlip Grove 42, palo santo syrup, low-acid apple juice, lemon and lime bitters produced with glycerin, and verjus, the pressed juice of unripened grapes. The drink is the brainchild of Fred Beebe, a bartender at Sunday in Brooklyn. The restaurant isn’t alcohol-free, but Beebe helped create an extensive mocktail menu that goes well beyond the sugary choices of yore, using unique ingredients.

Palo santo, for instance, is a tree native to Peru, Venezuela and Mexico’s Yucatan Peninsula that loosely translates to “holy wood” and is widely used in folk remedies.

“Everybody should be able to have a delicious drink at a bar,” Beebe said. “Hospitality is making sure everybody has a good time. Alcohol, for me, is not the most important part of a cocktail anymore. The cool juices and syrups and tinctures and mixtures and all that stuff makes a lot of the fun.”

“My girlfriend and I are interested in the health benefits of different botanicals and such,” he said.

Cat Tjan, 27, of Jersey City, New Jersey, was also on hand and brought a colleague, Ammar Farooqi, 26, from Williamstown in southern New Jersey. Neither drinks alcohol. Tjan said Listen Bar is the only sober bar she could find in Manhattan, where she works for a drug company.

“I have no interest in it,” she said of booze. “It’s not particularly fun. It’s very expensive. There are better ways to have a good night out.”

Many bartenders will mix up regular cocktails and just leave out the alcohol if you ask, but that’s different than choosing something conceived as virgin from a separate menu, Farooqi said. Mocktails generally cost a few dollars less than cocktails, but separate menus are still hard to find.

At the sober bar Getaway in the Greenpoint neighborhood of Brooklyn, mocktails go for $13 a pop. There’s the Paper Train, with lemon juice, tobacco syrup (from the leaf and containing no nicotine), vanilla and San Pellegrino Chinotto. And there’s A Trip to Ikea, a mix of lingonberry, lemon, vanilla, cardamom and cream. Getaway opened in April in a permanent space.

“Weekends are generally really busy,” said co-owner Regina Dellea. “My business partner’s brother is in recovery, and when he first got sober they missed having a space to hang out in at night, where you can meet up and just talk.”

Mainstream suppliers are catching on. Beer companies are experimenting with alcohol-free selections, and Coca-Cola North America gobbled up the popular Topo Chico premium sparkling mineral water. The U.K.’s Seedlip brand bills itself as the world’s first non-alcoholic spirits. It comes in three flavor profiles with ingredients like hand-picked peas from founder Ben Branson’s farm in the English countryside.

At Listen Bar, Tjan and Farooqi sipped on a mocktail dubbed Me, A Houseplant, a green concoction comprised of Seedlip’s Garden 108 variety (the one with the peas), cucumber, lemon and elderflower. Each glass was garnished with a hefty cucumber slice. It was thought up by Jack McGarry, co-founder of the booze-serving Dead Rabbit bar in lower Manhattan and a well-known mixologist.

McGarry is also three years sober. At Listen Bar’s “Good AF Awards,” he was one of the judges, clipboard in hand.

“Alcohol-free used to be very simplistic with, like, homemade lemonades and ginger ales. People are wanting more diverse offerings,” he said. “I’m intrigued at how it will all shake out. I’ve seen lots of trends come and go. When people come in asking for non-alcoholic drinks, we have a bunch of drinks that have been thought out.”

Chris Marshall in Austin, Texas, has been sober since 2007. He was once a drug and alcohol counselor whose clients often shared their frustration at not having an alcohol-free nightspot to frequent. They were his motivation for founding Sans Bar in Austin, with pop-ups all over the country, including Anchorage, Kansas City, Washington, D.C., Portland, Seattle, New York, Nashville and St. Louis.

“The response is just overwhelming,” he said. “We’re taking out community spaces, coffee shops and places like that. The lack of a social circle is the one thing so many of my clients lacked after treatment.”

Marnie Rae Clark, who lives outside Seattle, is also a recovering alcoholic. She’s experienced the struggle of socializing while sober and started a blog about the sober lifestyle in 2017. She founded National Mocktail Week this year. Part of her mission is to encourage bars and restaurants to up their mocktail games.

“I just want to be able to go out with my friends and have a nice grown-up sophisticated cocktail,” said the 51-year-old Clark. “It’s really about promoting inclusion and connection in the hospitality industry.”