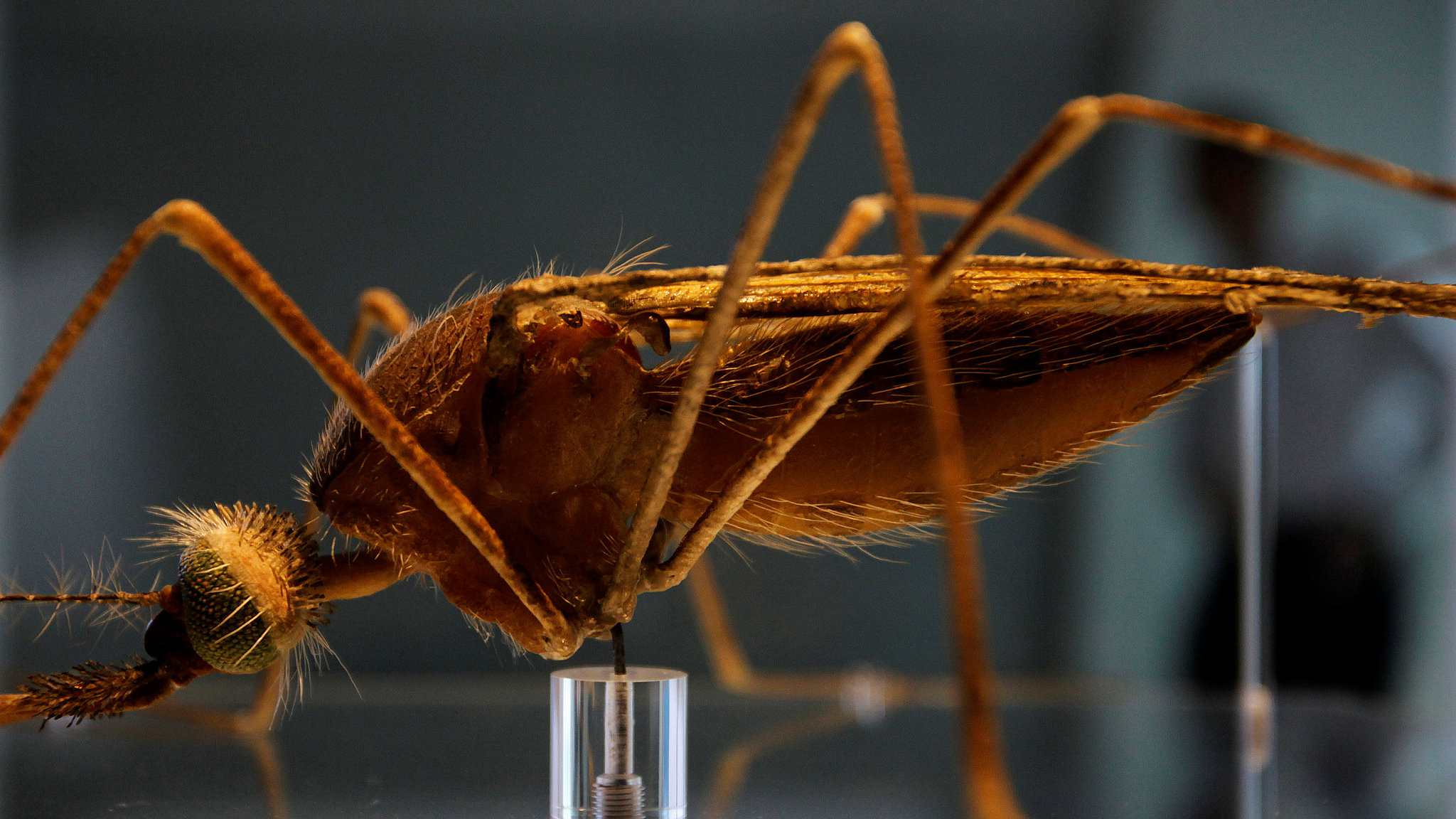 A model of an Anopheles mosquito at the Natural History Museum, in London, September 8, 2009. (Photo: VCG)

Scientists said Monday they had succeeded for the first time in wiping out an entire population of malaria-carrying mosquitos in the lab using a gene editing tool to program their extinction.

So-called gene drive technology works by forcing evolution's hand, ensuring that an engineered trait is passed down to a higher proportion of offspring – across many generations – than would have occurred naturally.

In experiments with the species Anopheles gambiae, scientists at Imperial College London tweaked a gene known as doublesex so that more females in each generation could no longer bite or reproduce.

After only eight generations, there were no females left and the population collapsed due to lack of offspring.

"This breakthrough shows that gene drive can work, providing hope in the fight against a disease that has plagued mankind for centuries," said lead author Andrea Crisanti, a professor in Imperial's Department of Life Sciences.

Malaria sickened more than 200 million people worldwide in 2016 and killed nearly 450,000. It remains one of the most deadly of infectious diseases.

Previous attempts by the same team and others to induce the genetically programmed extinction of mosquitos in the laboratory ran into "resistance" in the form of mutations that fought back against the high-tech engineering.

The next step will be to test the technology in a confined laboratory setting that mimics a tropical environment, said Crisanti.

"It will be at least five-to-ten years before we consider testing any mosquitoes with gene drive in the wild," he said in a statement.

The doublesex gene targeted in the experiments is deeply "conserved", meaning that is formed tens or even hundreds of millions of years ago and is today shared by many insects with only minor variations.

"This suggests the technology could be used in the future to specifically target other disease-carrying insects," the researchers said.

Scientists not involved in the study described it as a timely breakthrough.

"Traditional approaches to controlling mosquitoes – especially the use of insecticides – is becoming less effective," mainly due to the build-up of resistance, said Cameron Webb, a clinical lecturer at the University of Sydney.

2016 marked the first time in over two decades that malaria cases did not fall year-on-year, despite aggressive and well-funded anti-malarial campaigns.

Some scientists and technology watchdog groups have called for a moratorium on gene drive research.

Calls for a moratorium

"The ability to eradicate species and natural populations at will with synthetic gene drive is not to be celebrated but should rather sound an alarm," said Jim Thomson of the ETC Group, an NGO monitoring new technologies that often race ahead of regulatory frameworks.

"There are ecological risks from manipulating and removing natural populations, such as destroying food webs and shifting the behavior of diseases, as well as social risks of disrupting agriculture and enabling new weapons."

The issue will be squarely on the agenda in November in Egypt at a UN Biodiversity summit, which has mandated one of its technical committees to assess gene drive's potential risks and benefits.

"Governments, farmers, indigenous peoples and civil society will be pressing for a full moratorium," said Thomson.

The new research, published in Nature Biotechnology, was funded by the Bill & Melinda Gates Foundation, which has poured close to 100 million US dollars into the development of gene drive technology – especially via the research consortium Target Malaria – with the aim of eradicating the disease.

"It is incumbent on DARPA to perform this research and develop technologies that can protect against accidental and intentional misuse," DARPA spokesman Jared Adams told AFP last December.