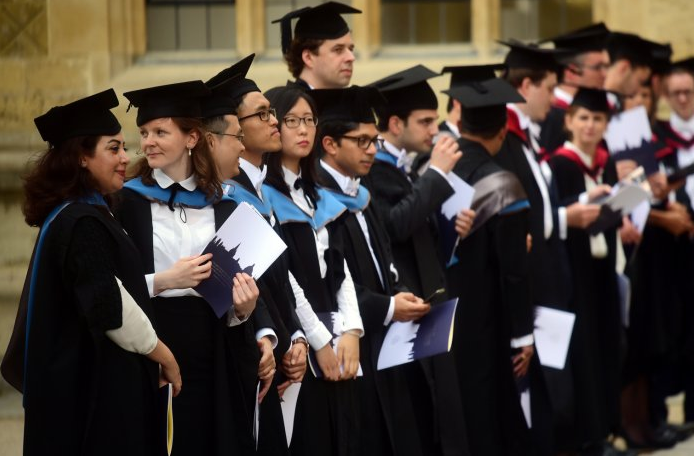 It prompted the Times newspaper to report it is the first time in history that men have been overtaken in the race for places at Oxford.

Figures show that last year 1,275 women received offers from Oxford compared with 1,165 men. Of those, 1,070 women got the grades to secure their place compared with 1,025 men.

The gender gap at Cambridge has also narrowed with 1,140 men starting their studies last fall compared with 1,055 women.

The Times said that data, from the universities admissions body Ucas, dates back only to 2012, but men are likely to have outnumbered women since the first Oxford college was established in 1249, though records of education being offered in Oxford date back 1,000 years.

A spokeswoman at Oxford told Xinhua: "We can't say for certain whether this is the first time in history that Oxford has let in more women than men, but it certainly is the first time since 2012 which is as far back as this year's UCAS figures go. And while it's too early to call this a trend based on one year's numbers, it is a welcome sign of progress for female applicants to Oxford."

Women were first admitted to Oxford university when Lady Margaret Hall opened its doors as an all-women college in 1878. Women could only attend lectures and were not allowed to take degrees, however. They became full members of the university in 1920.

The Good University Guide for 2018 shows the number of better-off children still dwarfs those from poorer backgrounds.

The number of university applications across the country fell last year, a result of a smaller cohort of 18-year-olds.

The Oxford Mail newspaper, published in the university city, said the new figures also reveal a record number of Asian students admitted to Oxford in 2017.