Tiger Woods says he has improved enough after spinal fusion surgery to snap a five-year win drought just ahead of the season's final major tournament, the 100th PGA Championship. 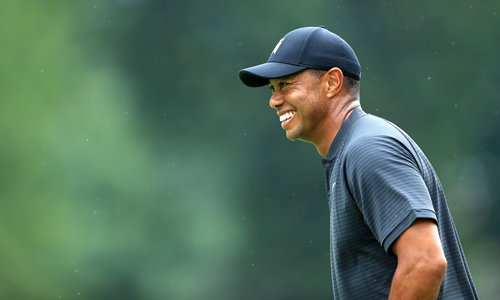 Tiger Woods looks on during a preview day of the WGC Bridgestone Invitational at Firestone Country Club South Course on Wednesday in Akron, Ohio. (Photo: VCG)

Woods, a 14-time major champion, tees off next week at Bellerive after briefly leading last month's British Open at Carnoustie. The former world No.1 boosted his ranking from beyond 1,200th in December to 50th.

"I went from just hoping to be able to play the tour to now I feel that I certainly can win again," Woods said. "Within a year to get down to 50 is a pretty good accomplishment. At the beginning of the year, if they had said you're playing the Open Championship, I would have said I'd be very lucky to do that."

Woods, who hasn't won a major title since the 2008 US Open, struggled with back pain in the past two years but has served notice his shot-making skills are returning to form.

He shared second at the Valspar Championship in March and in June shared fourth at the National after his best final round in six years.

"I've had an opportunity to win a couple times this year. I had a great chance at Valspar early in the year and even [at Carnoustie] I had a great shot at it," Woods said. "My game has gotten better and good enough where I feel like I can win again out here."

Woods has one last major before turning 43 in December. Only 14 times has a player 43 or older won a major and only two men have multiple wins beyond their 42nd birthday - Old Tom Morris in the 1864 and 1867 British Opens and Julius Boros at the 1963 US Open and 1968 PGA Championship.

He has not won any event since the 2013 WGC Bridgestone Invitational, but held the outright lead with eight holes to play at Carnoustie before a double bogey and bogey dropped him from the top for good.

"It's going to sting for a while because I had a great chance at it," Woods said. "I played myself into a great position. I made a couple of mistakes there at 11 and 12, ended up costing me the tournament."

Woods shared sixth at the Open, his best major result since 2013, and will chase his first consecutive top-10 major finishes since 2010 at Bellerive.

Battling back from severe back pain that had him wondering if his career was over, Woods now faces his hardest stretch of golf since surgery with a likely run of five events in six weeks, starting with the WGC Bridgestone Invitational and PGA Championship plus at least the first two PGA playoff events and likely the first three.

"We built a pretty good physical game plan for it," he said. "My training schedule, how to build myself up, my recovery breaks, even had to factor in how much I can practice, just to make sure I'm physically fit enough to get through this section.

"I also want to play well and win tournaments through this. I feel like my body is good... I still need to train really hard and limit how much I do practice, the wear and tear on the body, because I'm going to be putting it through its paces in tournament play."

Woods, whose 79 career PGA victories are three shy of Sam Snead's all-time record, is making a solid case for a Ryder Cup spot as a captain's pick.

He has already agreed to serve as an assistant to US captain Jim Furyk for next month's team showdown in France, but says his chances to play are "trending."

Woods also says his body would be ready for the grind of dawn-to-dusk Ryder Cup matches.

"I play 36 holes all the time at home. Granted we are in a cart and zip around there in two-hour rounds. It will certainly be different," Woods said. "But my job is to get on the team. I'm going to be there in either case but I would like to be there as a player as well."