In 1979, Soviet filmmaker Andrei Tarkovsky directed “Stalker.” In the movie, three men travel across a wasteland known only as The Zone in which the standard rules of reality don’t apply. While Tarkovsky’s Zone is a post-industrial vision of poisoned rivers and abandoned factories, in real life, The Zone is located in the heart of modern day Moscow and goes by the name of Luzhniki Stadium. Within its boundaries, everything is turned on its head: Robbie Williams is relevant in 2018, Anheuser-Busch spend millions of dollars not advertising Budweiser, a 38-year-old man qualifies for the starting XI of a national football team, Saudi Arabia fields a team that doesn’t seem to know what the touchline is and all the highlights come after 90 minutes of play. 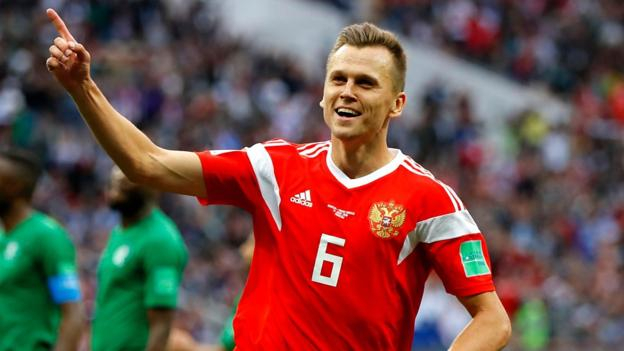 It was never a particularly tantalizing prospect. Less than a month on from the UEFA Champions League final between Liverpool and Real Madrid, the two best teams in Europe as decided by the strictures of the format, Russia vs. Saudi Arabia, the two worst national teams to qualify for the World Cup, seemed less like the starting course for a feast of football than a rind you have to get through to reach the tasty stuff. At least Brazil vs. Croatia, the opener of the 2014 World Cup, a game ruined by the referee awarding Fred a penalty for a blatant dive in order to keep the home fans happy, featured players such as Neymar Jr., Mario Mandzukic, David Luiz and Luka Modric; in this game, the two biggest names were Alan Dzagoev, who had to be subbed off with an injury in the 23rd minutes, and goalkeeper Igor Akinfeev, who faced zero shots on target in the whole match.

It’s difficult to state just how poor Saudi Arabia played. Eleven men rather than a team, they lacked any tactics beyond trying to kick the ball toward Russia’s net, but were so sloppy in the execution that it didn’t matter anyway. Defensively, only Osama Hawsawi’s efforts against Aleksandr Golovin and Denis Cheryshev were above the level of simply trying to get as many people to stand in the box – and even that has its limits, as Russia proved with each successive goal.

Even though they are officially the worst team, the early stages of play felt more like it was the combination of that knowledge and the pressure of being the hosts that was holding them back as passes missed their targets and offsides (imaginary or otherwise) mounted up, but once the first goal went in – a simple headed down ball from a cross by Yuri Gazinski – confidence immediately started to build and, by the end of the game, Russia grew into the totally average team that they really are.

Until the 90th minute when up 3-0 from a trio of blunt force goals and knowing they couldn’t lose, they turned on the style. Cheryshev, already in possession of the night’s second goal – a trick shot from almost point-blank range – floated the ball into the top corner from the edge of Saudi Arabia’s box. A gorgeous individual goal to cap off a night of artless teamwork.

Or so they thought; in playing out the rest of extra time, Russia conceded a free kick and Golovin took some of the shine from his brace-scoring teammate by bending it like Beckham around the outside of Saudi Arabia’s wall and back inside the post, making 5-0, a scoreline as simultaneously impressive and meaningless as Portugal’s 7-0 victory over the Democratic People’s Republic of Korea (DPRK) in South Africa.

As with “Stalker,” it was only at the very end of their slog that the Russians got a glimpse of their wildest dreams, but now the big question is if the rest of the tournament will play out to the standard expected of the World Cup or if the rest of the games will also take place in The Zone. There’s only one way to find out.