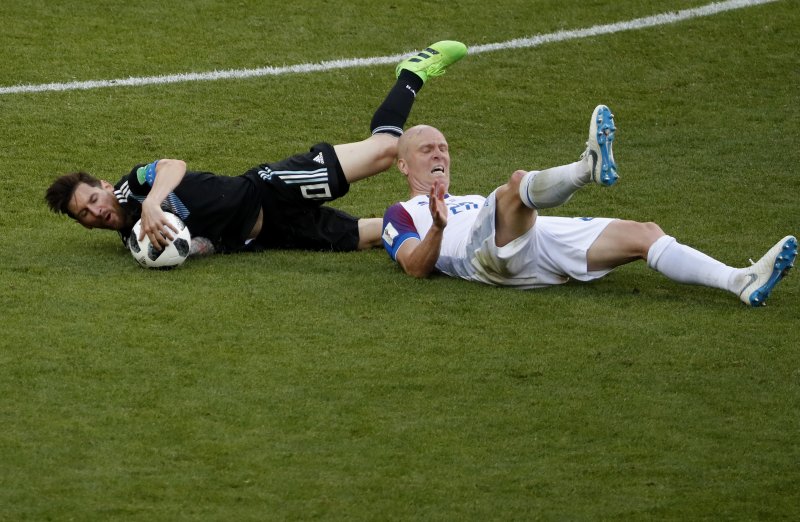 With nagging injuries, heavy marking from opponents and some simply uninspired play, the top stars of the 2018 World Cup have struggled to deliver on the impossible expectations they carried into the tournament, with one prominent Portuguese exception.

Aside from Cristiano Ronaldo, who has all four of Portugal’s goals in its two games, many of the biggest names are off to a shaky start.

No one has had rougher treatment from the opposition than the world’s priciest player, Neymar. During Brazil’s opening 1-1 draw with Switzerland, the 26-year-old was fouled 10 times, the highest number on a single player in a single match since the 1998 World Cup, when England’s Alan Shearer took 11 challenges against Tunisia.

“He just falls too much,” Fernandes said after the game in Rostov-on-Don. “Out of these 10, only seven or eight were fouls. We have to stop their star, and he is the star.”

Neymar felt the effects of the Swiss strategy long after Sunday’s match ended, limping out of training Tuesday as he continues to recover from a foot injury he picked up before the tournament. He trained Wednesday and was still confirmed as a starter for the match against Costa Rica on Friday.

On the heels of Ronaldo’s hat trick against Spain, Lionel Messi took the field against Iceland with goats trotting around him on the digital signage on the edge of the grass, a version of an ad in which he cradles a live goat, the implication being that he is the G.O.A.T. — the greatest of all time.

Messi set up a penalty with a deft chip into the box to Sergio Aguero, who was brought down. The greatest of all time then saw his spot kick saved by Iceland goalkeeper Hannes Halldorsson, and the game ended 1-1.

Throughout the match in Moscow, Iceland’s disciplined defenders and midfielders stopped Messi from making his famous runs and getting one-on-one chances.

“Messi is human,” Aguero said afterward. “Sometimes things happen for a reason. We need to be with him. This was a bad day, but he can decide a match at any given moment. Hope he is better against Croatia.”

“You can’t stop him with one player, you have to defend like a team. You saw that with Iceland,” defender Dejan Lovren said ahead of the Argentina clash late Thursday.

Egypt striker Mohamed Salah set a Premier League scoring record for Liverpool and held all the hopes for a deep run by the Pharaohs in their return to the World Cup, until he injured his shoulder playing for Liverpool in the Champions League final in a clash with Real Madrid’s Sergio Ramos, of Spain.

Salah sat out the opening 1-0 loss to Uruguay in Yekaterinburg, with coach Hector Cuper hoping to have him fit for Egypt’s second match, against Russia.

He made his World Cup debut in St. Petersburg and scored from the penalty spot, but only after the hosts led by three goals, and his mobility was clearly affected. He barely touched the ball in the first half and avoided physical contact with Russian defenders during the entire game, and Egypt was eliminated with one match left to play.

Ronaldo isn’t entirely alone in starting strong. Diego Costa has three of Spain’s four goals, Harry Kane has both of England’s, and Luka Modric scored one goal and set up the other in Croatia’s 2-0 win over Nigeria.

And there’s plenty of time for others to turn things around. Kylian Mbappe, the 19-year-old striker at the center of the second-most expensive transfer in history, managed just one chance in France’s 2-1 win over Australia in Kazan but scored Thursday against Peru.

It’s early, and the tournament has seen plenty of stellar play from lesser-known players, but many of the star scorers have work to do.