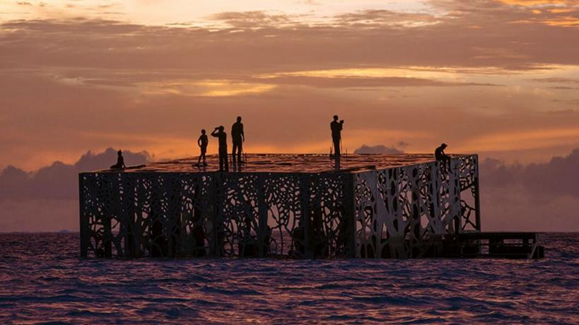 An intertidal art gallery filled with around 30 sculptures that will act as a habitat for coral and other marine species was opened recently in the Maldives, local media reported.

The gallery, called the Coralarium, is located at the Fairmont Maldives Sirru Fen Fushi resort. The cube, at a depth of three meters in the lagoon, features semi-submerged exhibits that disappear and reappear as the tide goes in and out. The sculptures were created using casts of real people, including Maldivian citizens.

Designed by British sculptor Jason deCaires Taylor, the installation was completed after nine months of work and will live as an evolving monument in the sea. 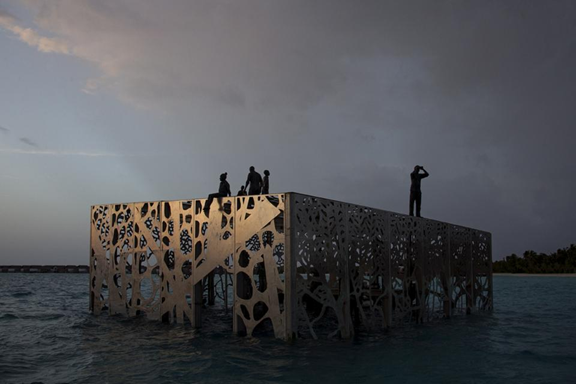 The world's first tidal gallery, which has opened at the Fairmont Maldives Sirru Fen Fushi resort in the Indian Ocean. (Photo: CGTN)

"It's almost like an inverse zoo," said deCaires Taylor in a video documenting the project. "In cities, we go into space and look at caged animals. Whereas this is almost like we're the tourists, but we're in the cage and the marine life can come and go and look at us. It's almost a reversal of how we interact with wildlife."

The frame of the gallery is made of pH-neutral marine steel and designed to reflect the blue hues surrounding it. The creators said the artwork has been carefully crafted to encourage the settlement of wildlife, mimicking the organic forms found in the water.

Tourists can now combine snorkeling with art as guided tours led by the resort's resident marine biologists are available. In the evening, a light system which illuminates the gallery attracts marine life and creates a sight from the island shore.