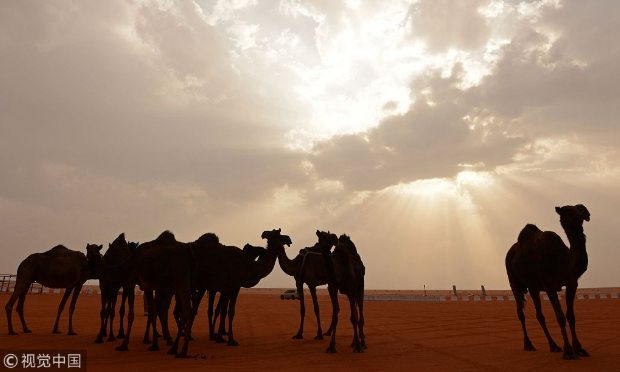 The world's largest camel festival has wrapped up in Saudi Arabia. The King Abdulaziz Camel Festival was held on the outskirts of the capital, Riyadh. This year's event lasted for one month and was the longest since it was launched nearly 20 years ago.

Over 50,000 camels from countries such as Saudi Arabia, Qatar, Kuwait and the United Arab Emirates (UAE) participated under the categories of camel racing and camel beauty contests.

Nearly 300 camels shared prizes worth over 220 million Saudi Riyals or about 59 million U.S. dollars, a record for activities of this kind.

Camels are an indispensable part of Arab culture. The mammals have been close companions of the Arab people and have had a significant role in their relations with other cultures and nations.

"A camel is like an emissary among civilizations. Just like China, Saudi Arabia also attaches great importance to its traditional culture. Camels played a very important role in the ancient Silk Road and Spice Road, especially in the Middle East, Arabian Peninsula and China," said Fahd Algaail, a culture scholar.

Over the years, the festival has added different types of camel culture-themed activities, and set up a special camel culture museum. The event has gradually developed into a cultural event, also presenting desert entertainment and a poetry contest.

"This year, we also had an extraordinary sports event, called the 'Bedouins Olympics', which was attended by people from 75 countries. It started on March 9 and ended on March 19 and this was just one of the many cultural events held during the King Abdulaziz Camel Festival," said Bandar Al-Rashid, head of the organizing committee.

The festival is an annual cultural, economic, sports and entertainment event held under Saudi royal patronage. It aims to consolidate and strengthen the camel heritage in the Saudi, Arab and Islamic cultures and introduce a new cultural and tourist attraction in the region.