BEIJING, April 29 (Xinhua) -- The International Horticultural Exhibition 2019 Beijing, the largest expo of its kind in the world, opened to the public Monday. 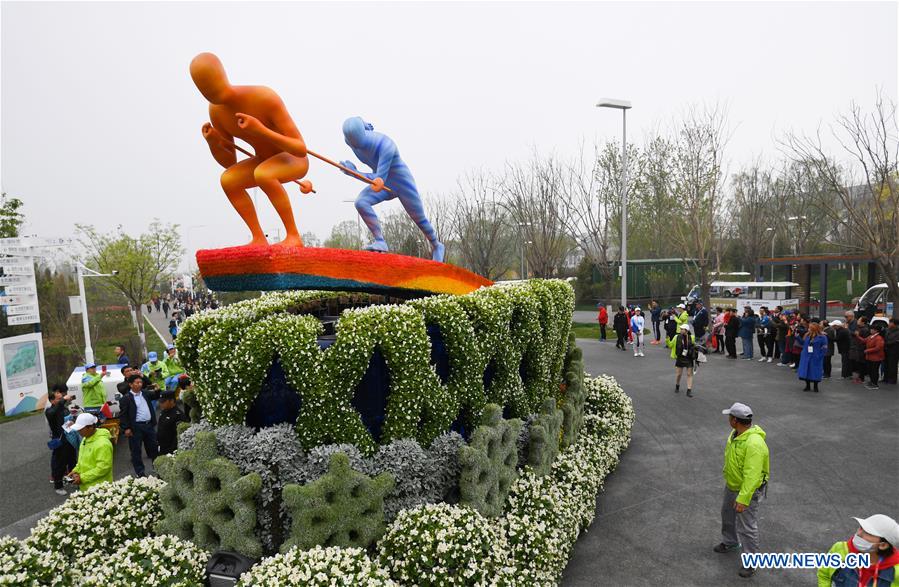 A float runs during a float parade at the site of the International Horticultural Exhibition 2019 Beijing in Yanqing District of Beijing, capital of China, April 29, 2019. (Photo: Xinhua)

A parade featuring festooned vehicles was held in the morning as the park welcomed the first group of visitors. A giant panda made of flowers rode through the 503-hectare park as performers in colorful costumes walked by.

The expo themed "Live Green, Live Better" has attracted exhibitors from 110 countries and international organizations. There are both indoor displays and outdoor gardens, highlighting the integration of life and ecology.

President Xi Jinping declared the opening of the horticultural expo on Sunday evening. The green development concept embodied by the expo should be spread to every corner of the world, he said while addressing the opening ceremony.

"This area used to be a vegetable field, but now the China Pavilion stands here. It is so amazing," said Lin Shuhui, 47, a farmer who lives near the park. "I did not expect the expo park to be so gorgeous. We should preserve the park well for more visitors."

Ren Haidong, a tourist from downtown Beijing, took his four-year-old son to the expo, hoping his child would get to know something about horticulture and nature. They saw a number of precious plants for the first time.

"The expo will not only deepen the exchange of cultures of different countries, but also help visitors understand the essence of building a community with a shared future for humanity," Ren said.

Nawaz Sharif, with Pakistan's Far East Co. Ltd., said the expo highlighted China's efforts in ecological governance. Sharif is a staff member at Pakistan's exhibition hall in the International Pavilion, which houses a number of exhibition halls for participating countries.

"I love the trees and flowers here at the expo," he said. "It is wonderful to see the environment so beautiful and clean."

The expo will last until Oct. 7. More than 2,500 cultural activities will be held during the period, with an estimated 16 million visitors from around the world.

"The Beijing horticultural expo is a special green carnival and a dialogue between man and nature, inspiring people to integrate horticulture with life," said Jiang Zehui, chairperson of the China Flower Association.

"China has led the way in promoting green development. It is clear that the Chinese government supports ecologically sensitive development in order to create a 'Beautiful China,'" said Bernard Oosterom, president of the International Association of Horticultural Producers, at the opening ceremony.

The International Horticultural Exhibition 2019 Beijing is the largest event of its kind in human history.