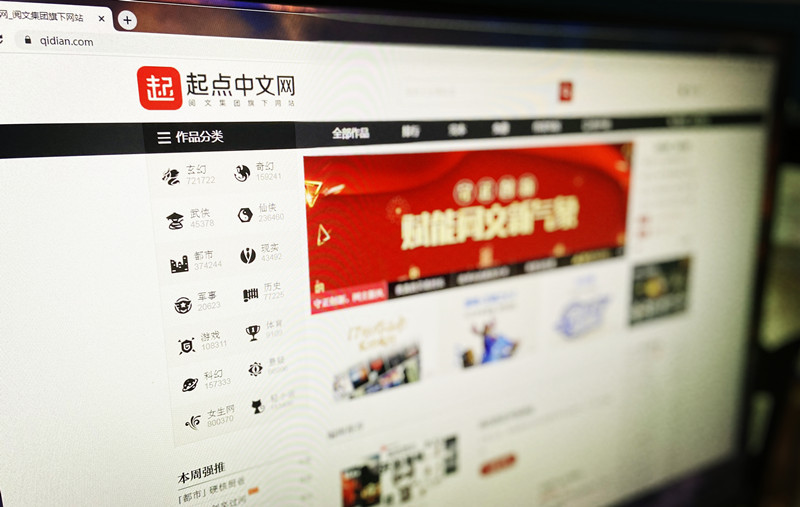 According to the People's Daily, there are now 14 million contracted writers at the country's 45 major online literary websites, such as qidian.com, readnovel.com and jjwxc.net, accounting for nearly 1% of the country's entire population. (Photo: Xinhua)

Sitting behind a keyboard and writing novels does not sound particularly complicated. However, being able to build, and keep, a loyal readership is an entirely different story.

With more than 8 million new graduates flocking into the job market over the past few months, online literary writing, like many other internet-based channels, has played a pivotal role in propping up the country's efforts to secure a decent employment rate in spite of the economic impact of the pandemic.

A few weeks ago, the Ministry of Education announced that a range of professions, such as writers and freelancers, would be recognized as formal positions. Meanwhile, graduates who have taken up roles such as these can be identified as employed.

"Relying on the power of the internet, online writing— which offers a substantial number of jobs such as writing, editing and operations, focusing on pooling together all possible resources— is emerging as a promising industry," explained Xu Miaomiao, research fellow of aesthetic education at Capital Normal University in Beijing.

According to the People's Daily, there are now 14 million contracted writers at the country's 45 major online literary websites, such as qidian.com, readnovel.com and jjwxc.net, accounting for nearly 1% of the country's entire population.

Zhao Lei, a 24-year-old author of web novels, has been writing under the penname "Ku Xuanjun" for around 10 years. Although time-consuming, Zhao feels he has gained a lot from the job. Not only did it help him shake off an internet addiction, but it also helped him develop a strong spirit, resilience and perseverance.

"Reading online novels has been a hobby of mine since I was at secondary school," Zhao recalled. "One day, when engrossed in one of these stories, I decided to try and create one of my own."

However, becoming a professional writer is no simple matter. As a youngster, Zhao came up short several times while trying to get a contract with various web novel websites.

But he never gave up, and Zhao's stubbornness pushed him to work even harder at becoming a qualified author. Three months later, he finally succeeded.

However, a contract is no magic bullet guaranteeing that writers will find a wider audience. When he was first starting out, Zhao was not even paid until the novel he was writing reached 900,000 Chinese characters. Meanwhile, his second payment came only after he completed 600,000 characters for his next novel.

"Driven on by a keen interest and strong will, I've been able to see my writing progress from one book to the next. There are no shortcuts if you want to be an author — you just need to spend as much time possible reading and writing," he explained.

Chen Hongyan, who publishes under the name "Ling Chen" (meaning "dawn"), is a veteran web novelist from Hangzhou, the capital of China's eastern Zhejiang province. Born in the 1990s, she used to be an executive director at Shanghai Lixin Exhibition Co Ltd. However, with a passion for writing, she resigned and established her own studio focusing mainly on web novels.

"The easy access to online novels creates a false impression that so long as someone can type, they can write. But in reality, it's quite the reverse," said Chen.

Online novels can go on be published in hard-copy or even adapted into screenplays, but are often lengthy. Some can be as long as a million, or even several million Chinese characters.

"The career is stressful because of its high requirements on basic writing skills, your capacity to learn new things every day and the need for a never-ending supply of inspiration. In this line of work, writing 10,000 characters a day is nothing unusual," she elaborated, joking that the most competent writers must be those with bald heads — having pulled out their hair from stress.

However, according to Chen, despite the high workload, writing web novels in China remains a promising career since the internet is now an integral part of the lives of those born after 2000.

"Web novels are growing like a bud which can blossom fully with careful watering," she said.

To improve the quality of writing online, regulatory bodies in China have organized training sessions for those in the industry. Meanwhile, they also periodically select the best-written stories and compile a list of recommendations for readers.

In addition, independent-learning is one way in which web novelists can develop more insightful ideas and grasp more skills.

"No matter how busy I am, I'll spend two hours every day reading a wide range of topics. Sometimes I'll also chat with other writers, seeking new ideas that can appear seemingly out of nowhere from our brainstorming," Chen said.

Supported by a large readership, Chen recalled that the most unforgettable message she received was left by a female fan, who said that she had managed to get through a really tough time in her life by reading her serialized novels.

"I'm extremely happy to have people who love my work, and I hope I can help more people escape from difficulties in their life by reading more of my creations," she said.