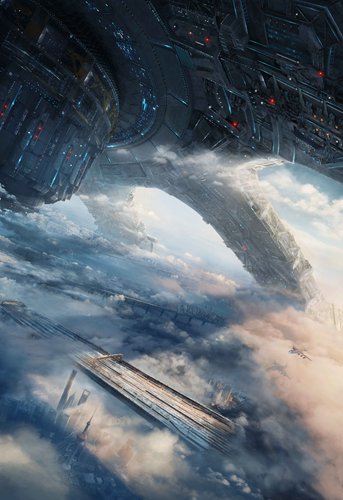 A big market for Hollywood sci-fi blockbusters, China is now looking forward to domestic film The Wandering Earth putting the local film industry on par with the rest of the world. Even US media outlet The Hollywood Reporter saw the film as "China's first full-scale interstellar spectacular" in a report in late 2017.Adapted from Hugo Award-winning author Liu Cixin's short story of the same title, The Wandering Earth is set for a nationwide release on February 5, the first day of the Chinese New Year of the Pig. The film has received quite positive audience reviews so far after a few advance showings: On Sina Weibo, 72.6 percent of 818 viewers have given the film five out of five stars. Rooted in Chinese cultureThe original short story takes place in the far future when the Sun begins dying out. To save themselves, humans join hands to build large scale planet thrusters to propel the Earth out of the Sun's orbit and sail it to a new star system - a process that takes about 2,500 years. The film, however, just takes a 36-hour slice from the story, which time people around the world work to prevent the Earth from crashing into Jupiter. It was the idea of propelling Earth outside the solar system that attracted director Guo Fan to the project, although he didn't realize the exact reason until he went to Hollywood for a short research trip. "I realized that is the core of Chinese culture - our deep attachment to the land and home. Therefore, even when we decide to run away, we take our 'home' along," Guo told the Global Times. Having no previous experience with sci-fi films, Guo had a difficult time finishing the project. "The biggest obstacle was a matter of trust," Guo told the Global Times. "Not only did other people have doubts about me, I had doubts about the different departments in my team and among these departments there were doubts about each other as well." However, Wu Jing, currently one of the most popular Chinese actors in the world thanks to his mega-hit Wolf Warrior 2, put his trust in Guo the moment the director approached him to be in the film. Not a sci-fi fan, Wu said he doesn't remember any of the story details or science figures that Guo explained to him when they first met, but he saw in Guo the same sincerity he saw in himself years ago when he began trying to get his directorial debut Wolf Warrior off the ground. "So I said to him: 'I can help you, on one condition - if you succeed, don't forget to help the next Wu Jing and Guo Fan,'" Wu said.Like any other sci-fi film, VFX is an important part of The Wandering Earth. A Chinese team handled three quarters of the work on the film, while a US team took care of the rest. This reliance on a Chinese team has caused some industry insiders to worry about the film, since Chinese VFX has been criticized for years.Guo admitted that he too was worried at first and originally wanted to have a US studio handle the VFX."The primary reason [we went with a Chinese studio] was that we didn't have enough budget," Guo explained. Yet he added that working with foreign VFX teams posed a challenge as well. "It is not just a language barrier, but a cultural one as well. It is very difficult for a foreigner to understand something deeply rooted in Chinese culture." Fortunately, he later found that the split worked quite well as the teams from both sides were constantly competing with each other, which caused the resulting special effects to turn out quite satisfying. Chinese sci-fi 2.0?While The Wandering Earth is seen as the first Chinese sci-fi film to match the Hollywood-style of sci-fi blockbusters, recent years have seen several domestic films with sci-fi elements being produced. Opening on the same day as The Wandering Earth, Ning Hao's Crazy Alien is another film that points to efforts of Chinese sci-fi filmmakers. A few other projects like Shanghai Fortress and The Three-Body Problem, the latter another of Liu's sci-fi works, are on the way. One factor behind Chinese people's recent enthusiasm towards sci-fi has much to do with the nation's space program. With the Chang'e-4 lunar lander's successful mission to the moon earlier this year, this enthusiasm is sure to increase."Sci-fi film is a reflection of a nation's comprehensive strength," Guo said. "Only when China's space industry is very well developed in reality can our audience truly believe in sci-fi films that extol Chinese astronauts and spacecraft." Wu agrees. "Chinese people are more and more looking to the future," he said, adding that before, many Chinese films were stuck looking at the past, such as starting with words like "Since the Opium War in 1840, China has endured years of bitterness…""We hope this film can plant a sci-fi seed among children, especially Chinese children, and lead them to the exploration of science," Wu said.