As pitch invasions go, it was startling, tear-jerking and extraordinarily thrilling. After referee Jaime Latre blew his final whistle, from the four corners of the RCDE Stadium, tens of thousands of Espanyol fans hurtled towards the field of play like sharp arrows, letting out an unquenchable roar of exhilaration to celebrate the club's return to Europe for the first time in 12 years. 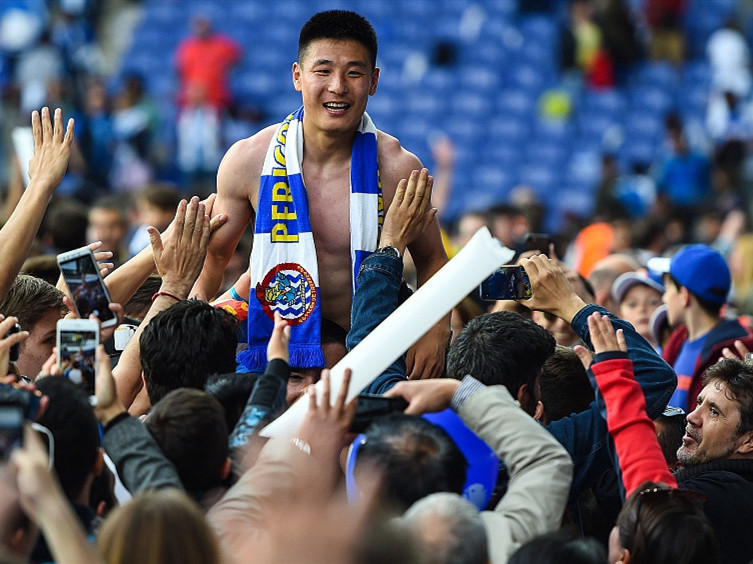 Amid all the craziness and euphoria of their incredible late charge into a Europa League spot, one Espanyol player stood out from the crowd. Wu Lei, who stripped topless and wore just his pants, was raised aloft on supporters' shoulders, sweaty thighs pressed against their necks.

Given his goal against Real Sociedad on Saturday emphatically made sure of their top seven finish at the expense of Athletic Bilbao, the 27-year-old Chinese sensation was on the receiving end of the love, reverence and adoration that he thoroughly deserved.

The clincher itself was a thing of beauty. In a counter-attack executed at breakneck speed, Victor Sanchez released Wu from inside his own half and he easily outran the defense with his scorching pace. As Geronimo Rulli attempted to rush off his line to smother the shot, Wu switched the ball to his right foot before arrowing a shot beyond the reach of the Sociedad goalkeeper.

If Roberto Rosales' opening goal before the hour mark had not completely settled Espanyol's nerves in a tensely fought affair, Wu's cracker late on virtually killed off any lingering Sociedad hopes of staging a miraculous fightback.

After he had done his job, Espanyol head coach Rubi substituted Wu in the 81st minute and as the former Chinese Super League (CSL) golden-boot winner walked off the pitch, the crowd rose to their feet and began applauding the man who produced another heroic performance that helped Espanyol achieve what most of their fans would deem impossible.

When Wu swapped CSL for La Liga in January, Espanyol were on a miserable run of nine defeats in 10 league games which has left them only three points above the relegation zone, with desperate fans calling for Rubi's head.

Fast forward four months, the "blanquiazules" are enjoying a record nine-game unbeaten streak, during which the new boy Wu found the back of the net three times and has been directly involved in six goals in 12 appearances, resulting a staggering upturn in results that saw Espanyol climb up the table from 15th to 7th.

Even before the Sociedad game, the odds were stacked heavily against Espanyol who were dependent on a couple of factors working in their favor to clinch the last Europe League spot. They must beat Sociedad while hoping Athletic Bilbao lose to Sevilla on the same day.

Much to La Liga observers' astonishment, that is exactly what happened: the irrepressible Wu sealed Espanyol's unlikely win while Athletic slumped to a  nightmarish defeat despite hitting the woodwork in stoppage-time.

"It's impossible to forget this moment," noted a visibly emotional Rubi after the wild, draining night. "I've not cried for a long time but today I did, and veteran players are crying, the dressing room is flooded with tears."

Surely the crazy scenes at the final whistle will live long in the memory of Rubi, Wu and his resilient teammates, so did those ecstatic fans whose huge emotional investment in this intrepid Espanyol team finally worth it.

Thank goodness it's been a wild ride.