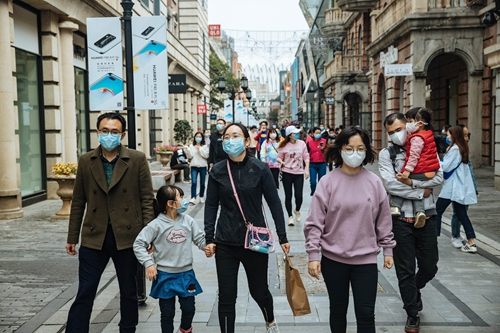 People walk to shop at the Chuhehan Street in Wuhan, Central China's Hubei Province on Sunday. The city announced to disburse 500 million yuan ($71 million) worth of "consumption coupons" to residents to help restart the economy after a two-month lockdown. (Photo: Global Times)

As Chinese writer Fang Fang, who chronicled lockdown life in Wuhan, the city which bore the brunt of the coronavirus, stirred a backlash over her controversial "Wuhan diary," people in Wuhan expressed mixed reactions. Some applauded her frankness, while others decried her for publishing heresy and demonizing Wuhan's battle against the virus.

However, after life slowly returned to normal following the lifting of the lockdown,   Wuhan people feel they need to leave the scars behind and any recording that brings back their painful memory.

Chen Xiao (pseudonym), a Wuhan volunteer who helped patients get hospitalized and delivered food for quarantined Wuhan residents while the city was under lockdown, has always cherished his bond with fellow volunteers.

Discussions on Fang Fang drove a wedge through their "family-like" bond.

"Our group chat has been very intense since it was bombarded by news that Fang Fang was planning to publish her Wuhan diary in the US and Germany," Chen said.

Chen, who has been active in the frontline of Wuhan's battle against the virus, told the Global Times that at the early stage of the outbreak, he appreciated Fang Fang for her frankness, which expressed the anger the volunteers were harboring but dared not speak.

"But my views were gradually changed because she was overwhelmed by her preconceived notions,  and let her emotions override her,"  Chen said.

Fang Fang has never set foot on the frontline of the outbreak, and has no right to "reveal the truth to the public," Chen said. "If she only sat at home and wrote down the heresy, maybe she should not call her book 'diary;' 'fiction' is appropriate."

Ever since she published her "diary" of Wuhan residents' lockdown life on Sina Weibo, Fang Fang, whose real name is Wang Fang, who is also a member of the Hubei Writers Association, has stirred heated debate online. The backlash against her climaxed after news that her "Wuhan diary" was about to be published in the US and Germany, with many netizens saying she is being used by the West to sabotage Chinese people's efforts against the COVID-19 outbreak.

When asked whether she believes her writing would be used by the West to support their "blame China" theory and evidence for them to ask China to compensate for the coronavirus, Fang Fang said on Saturday that she believes lawyers would choose real and first-hand evidence such as official statements and media reports based on reporters' field investigations instead of a diary "written with the author's personal feelings."

The credibility of Fang Fang's diary was challenged since late March after some accounts in her stories turned out be totally wrong. When official statements said more than 40,000 medics who came to Hubei to help fight the virus had no infections and no one died on the frontline,  Fang Fang wrote in March questioning it, saying her doctor friend told her a 28-year-old nurse from Guangxi Zhuang Autonomous Region died on February 28 and asked people to remember her.

The diary sparked an uproar among Chinese netizens and many lashed out at the top health authority and demanded an explanation. However, it turned out that the nurse, Liang Xiaoxia, was in a coma and still receiving emergency treatment.

Fang Fang also questioned the death toll in Wuhan by claiming that a photo from her doctor friend again engulfed her with sadness, as it showed large numbers of cellphones belonging to deceased people strewn around a funeral parlor.

"After reading this I was really angry. But I saw with my own eyes when I went to the hospital in mid-March that medical staff carefully wrapped phones and other items belonging to the dead with plastic bags, and carefully organized them, then handed them to family members," said Luo Ning, a frontline volunteer.

"It dawned on me that she [Fang Fang] knows her diary is soaked in personal feelings and biases. I bet she also knows that once published in other countries, her diary will be a reflection of Wuhan," said Luo.

She said that the disaster of the COVID-19 pandemic is unparalleled in human history, not because of its contagious ability or severity, but because it planted fear and arrogance in people with unparalleled speed in this highly digitalized era.

In her latest interview, Fang Fang dodged a question about whether she is consuming Wuhan's misery.

A frontline doctor surnamed Zheng said "Chairwoman Wang should not glorify her writing as a piece of work out of deep love for Wuhan. Because for us, she did nothing but exaggerate the city's darkness, adding insult to injury."

Some of us risked our lives to save the city from darkness, to protect Wuhan people from darkness and grief. If she loves and cares for Wuhan, she should contribute her share by helping the city overcome difficulties, not just sit at home and let her imagination and heresy go wild in writing, Zheng said.

Wuhan resident Xiao Ning told the Global Times that she read Fang Fang's diary while she was under quarantine. "I sympathized with her at the beginning, but later I felt she was unconsciously instigating people to go against the government and sow division in society." Xiao said her father is a Party member and a government official who was later assigned to work with residential communities to fight the virus.

"Government officials and community workers faced great risks at that time. One day, I went downstairs and saw the head of our residential community on duty wearing a towel to cover his nose and mouth because he did not have a mask. Why didn't Fang Fang write about those heartwarming stories? One has to know that in the darkest days in Wuhan, there was not only death, crying and fear, but also love, responsibility and sacrifice."

Xiao said that news that Fang Fang published her diary in the West, coupled with Wuhan's lockdown used to be the center of her argument with friends.

"We don't talk about her now. Wuhan people just went through something unimaginable. As the virus recedes, we are welcoming our new lives, getting ready to work, to study, make our lives better, and let go of anything linked to the virus. This includes Fang Fang and her diary."