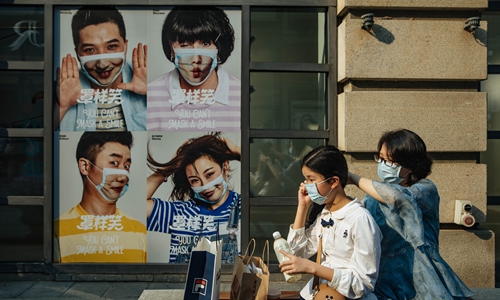 A five-day May Day holiday further relaxed the city of Wuhan, Hubei Province, on Friday, the first long vacation since lockdown on the city was lifted. How did people in this city, borne the heat of coronavirus, celebrate this special holiday?

Many Wuhan residents stepped out of their doorsteps for the first time in four months on Friday, which even caused traffic jam in many popular spots . Most people devoted their precious outing to shopping malls, where shops flung out "unprecedented" discounts to attract consumers, and parks, where the cooped up children can finally breathe fresh air and catch the last glimpse of 2020 spring.

Even though the city has achieved a phased victory against the virus, as it hasn't recorded new infections for days, and all hospitalized patients were discharged, Wuhan residents remain cautious in mass gatherings. They keep a distance from each other, wearing masks all the time and use disinfectants very frequently.

On Friday morning, Wu Min from a Tory Burch shop in Wuhan's largest and most famous Bailian outlets, said she had the busiest morning in months, as the shopping district rolled out "unprecedented" discounts (many items enjoy a 90 percent-off discount) to attract consumers in the holiday.

Wu said her shop on Friday witnessed most consumers since the shopping area reopened on April 1. "But the number is still small compared with the pre-pandemic era. If it were last year, with such a big discount, the shop would be filled with consumers."

Long lines can also be spotted at shops of brands favored by Chinese consumers, such as Coach and Nike. Temperature tests and health code check are necessary for every shop.

When asked if the crowd worries her, Leyla, an international student from Turkmenistan, who is studying in Wuhan, whisked off the concern, saying she felt very safe in Wuhan right now. "This is the first time I went out since the city imposed lockdown in January. I felt safe after I heard there's no new infection in Wuhan anymore."

Many restaurants also opened dine-in service on Friday or the day before to welcome diners, but their wish to revive business soon gradually goes into ashes. A restaurant owner surnamed Chen told the Global Times that she opened her restaurant on Thursday, hoping to attract diners during the May Day holiday.

"It is not optimistic. I got only three tables on Thursday, and I don't think business will be better off during the May Day holiday as we don't have tourists coming in this year. Locals prefer to cook by themselves as concern over contagion lingers in their minds," said Chen.

Although the risk level of Wuhan was lowered on April 28, and Hubei announced on Friday it relaxed its public emergency response level from level one to two, people traveling from Wuhan to non-Hubei cities are still subject to quarantine.

Only a handful of people can be seen on Jiqingjie street, one of the favorite tourist spots, which features local cuisine, among travelers to Wuhan. A Wuhan local surnamed Wu sitting on the road told the Global Times that the street usually has the hustle and bustle tourists during holidays, "so many that you don't even know where to step in."

Many food shops, which used to be greeted by a long line of mouthwatering tourists, were closed or empty with salespersons dozing off during lunchtime. "Many people are still scared of visiting Wuhan at this time, and Wuhan locals prefer to stay here as traveling out of the city is very troublesome," said Wu.

Wu's view was echoed by many Wuhan residents reached by the Global Times, as they believed they would stay put this holiday. "I prefer to visit parks and well-ventilated places," said a Wuhan resident, surnamed Yu.

Wuhan's Donghu Park remains the most popular spot for residents during the holiday. An employee from the ticket office told the Global Times that the park witnessed most visits for months, and this is a "comfort" for her.

Wuhan resident Xia Yi told the Global Times that this is also her first time out since the city imposed a lockdown on January 23. "My child would go mad if I kept locking him inside the house," Xia laughed, noting that she is still on high alert when placed in densely populated areas. "I asked my son to keep a safe distance, and only take off the mask when no one is around."