Many residents of, and tourists going to, Xi'an have recently noticed that the Bell Tower and the ancient city wall, both among the most popular destinations in the capital city of Northwest China's Shaanxi province, are under renovation.

The Bell Tower has especially attracted the attention of many with a net covering its surface. Some witty internet users say that the historic landmark, built during the Ming Dynasty (1368-1644), is "wearing a face mask".

According to a notice released by Xi'an Bell and Drum Towers Museum, the Bell Tower suspended services from June 10 to Aug 25 for renovation.

Wang Lei, director of the museum, tells China Daily that as a precious historic heritage site, the Bell Tower undergoes frequent renovation. The last overhaul was in 2011 and the renovation this year is a relatively small project, which will last for only two and a half months and focus on the restoration of the roof and the rafters.

"Some of the gold foil on the roof of the tower has fallen off and rafters have decayed because of weathering," he says. "It's a regular renovation and protection project funded by the National Cultural Heritage Administration."

Only a few kilometers away from the tower, restoration continues on the ancient city wall of Xi'an, which dates back to the Ming and Tang (618-907) dynasties.

Experts on the preservation of historic relics have to diminish the decaying caused by alga and mycete (fungus) on the surface of the city wall regularly, so that the wall is not damaged. 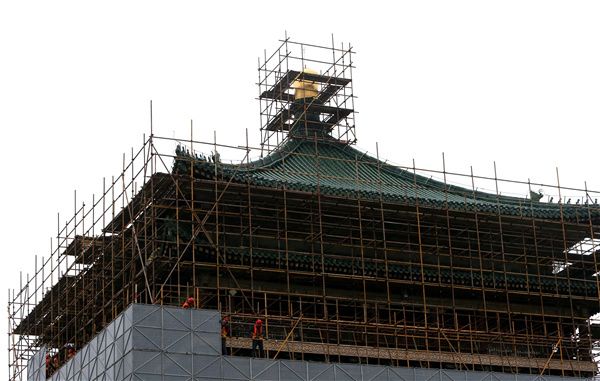 The tower undergoes renovation on June 23. Admission for the general public was suspended until Aug 25. (Photo: China Daily)

"Oxygen insulation is the best way to protect the ancient city wall and is conducive to the wall's 'longevity'," says Wang Su, a researcher at Xi'an Tang Imperial City Hanguang Gate Relics Museum.

Zhang Qingsan, a staff member of the Bell and Drum Towers Museum, who is responsible for the renovation project on the tower this year, says he and his colleagues will always stick to the ethos of "minimum intervention"－a basic principle in historic heritage restoration and protection－during the renovation, and will always try their best to keep the original look of the Bell Tower.

"After the restoration, the tower won't change much in the eyes of tourists," he says. "But from the perspective of relic protection, the 'life span' of the tower will be prolonged greatly."

Wang Lei says he's glad to find that so many people have noticed the changes to the Bell Tower. "Even before the renovation, some residents and tourists had already noticed the effects of weathering on the tower and made suggestions to us that the tower should be renovated," he says.

"We really appreciate people's affection for the Bell Tower and their sense for protecting it," Wang adds.

Wang Yiming, a resident in Xi'an's Beilin district, the site of the ancient city wall and the Bell Tower, says he passes the tower and sees the city wall almost every day.

"As part of our heritage, dating back hundreds of years, they do need regular restoration and protection to reduce damage by weathering, so that they can better show our culture and history to tourists from China and overseas," he says.