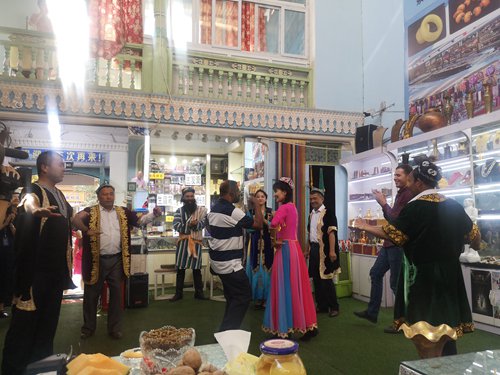 A Chinese cultural exchange delegation from Northwest China's Xinjiang Uyghur Autonomous Region, organized by the State Council Information Office, paid a visit to France on September 8, exchanging views with the French Council of the Muslim Faith (FCMF) and French scholars, and holding a discussion with local overseas Chinese to explain the development status of Xinjiang, the Xinhua News Agency reported.

The delegation visited the Grand Mosque of Paris on Friday morning and briefed the FCMF members and scholars on China's policy on freedom of religious belief and the development of vocational education and training centers in Xinjiang.

The delegation suggested that the purpose of the centers is to make the students understand the nature and serious harm done by terrorism and religious extremism.

Dalil Boubakeur, honorary president of FCMF, said that coercing people to participate in violent and terrorist activities in the name of religion is heinous, and that separatist and extremist forces are not tolerated in any country, said Xinhua.

On Friday afternoon, the Chinese delegation and French scholars held a symposium in Paris. The delegation outlined Xinjiang's development achievements, its important role in the Belt and Road Initiative and the historical causes of Xinjiang's problems.

Xing Guangcheng, head of the delegation and director of the Institute of Chinese Borderland Studies at the Chinese Academy of Social Sciences, said at the conference center that they have come to France to tell the truth about Xinjiang and make their voice heard to all walks of life in France.

Sonia Bressler, a French writer and expert on China who attended the symposium, said that the Chinese delegation frankly addressed many groundless suspicions in Western public opinion. She believes that scholars from the two countries should strengthen exchanges and more French scholars should go to Xinjiang to find out the truth.

After concluding its visit to France, the delegation will also go to the UK to exchange views with local communities.