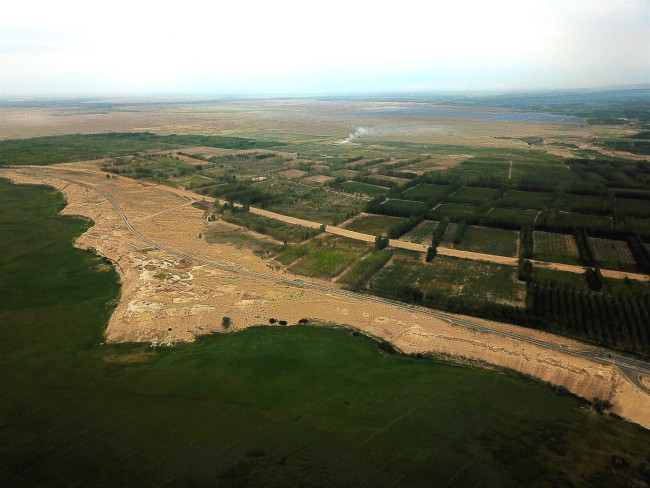 An oasis in the desert in China. (Photo: VCG)

"A few decades ago, there was just yellow sand here and no trace of green. Now, it has changed a lot, we can't believe it," said 73-year-old local villager Shi Heshan, whose parents arrived in Luopu County from Jiangsu Province in the early 1960s to help the local people to develop the region's economy and improve its environment.

The climate was harsh, but these young people did not give up. Several generations worked to plant the trees that have prevented the region from becoming engulfed by the desert. Their hard work gradually turned the sand dunes into fertile farmland.

There is a 15-meter-high apricot tree in the orchard behind Shi's house. "My father and I planted it together in 1976," Shi said. "Now, the tree produces several hundred kilos of fruit each year."

Since 2012, the local government has been inviting experts to provide guidance to the community on planting trees and using technology to stop desertification. It also built an 8,000-hectare ecological agriculture science and technology demonstration park.

"Now this park has become an oasis," said Chen Gang, deputy director of the park's management committee. He explained that many different kinds of trees now grow in the park, such as poplars and red willows, along with economic plants including red dates and walnuts. The mix of trees allows the oasis to both improve the local environment and raise the incomes of local farmers.