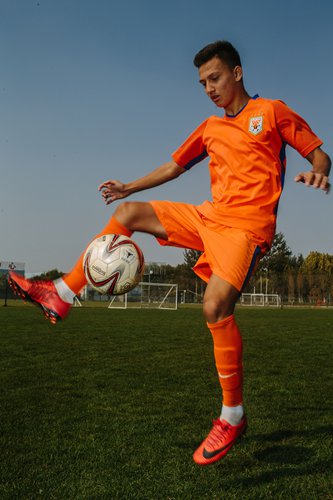 Subi Ablimit always seemed destined to become China's first soccer "golden boy."
Born in 2002 in Yining, Northwest China's Xinjiang Uyghur Autonomous Region, Subi has been training at the Luneng Taishan Football School in East China's Shandong Province since the age of 9.
Subi told the Global Times that he could not speak a word of Putonghua when he first came to Luneng, but gradually grasped it and went on to play a key role in his team.
Consistently calm, decisive and active on the field, he developed into a reliable leader and was chosen to be the captain of China's national youth teams.
In 2017, he won the Golden Boy prize at the China Footballer of the Year awards, the first time the prize for young talent was given.
This year, 17-year-old Subi skipped a level and joined the Chinese Under-19 national team, putting him well on his way to gaining a place on the Chinese national team.
Growing up
Like many boys in Xinjiang, Subi always dreamed of playing football.
As a young kid, he played with friends on the street or in school whenever they had the time. Back then, the conditions of the soccer grounds Subi and his friends played on were not very good.
"But it's already much better. The country values soccer in Xinjiang, and many soccer clubs have invested a lot in the region," Subi said.
In primary school, Subi's coaches sent him to the Luneng school in Weifang city, the top soccer academy in China. After playing in a match, Subi was selected by coaches in Luneng.
"I was young at that time and it was the first time that I played outside my hometown. As soon as I entered the campus, I saw how good the environment for playing soccer was and immediately wanted to join," he said.
His father and grandfather are also soccer fans. They supported Subi's decision and have always encouraged him.
But studying and training in a school almost 4,000 kilometers from home was not easy for a 10-year-old boy.
"I was badly homesick, as I had never been away from my parents," he said.
Language was another problem. He did not speak Putonghua in Xinjiang and could not communicate with his teammates.
When he went home during holidays, Subi had to travel by train for two or three days to get to Urumqi, capital city of Xinjiang, and then another 10 hours to Yining. "Everything changed in my life and it was very hard for me. I wanted to cry every night," he said.
Subi's parents encouraged him and his teammates from Xinjiang also helped him overcome the language barrier. After a while, he finally grasped Putonghua.
Nine years on, life has changed a lot for Subi, who has become the star of the school and a role model for Xinjiang children who want to play soccer.
He believes the most important qualities for a professional player are "self-discipline and kindness."
Why is he so popular among teammates? "Maybe it's because of my personality - I like making friends, and not only in Luneng. In the national team I also had many friends," he said.
Understanding the game
Subi has his own way of looking at soccer, and has learned a lot from his coaches in Luneng.
Last year, his coach was former Japanese national team player Kurata Yasuharu, who pays great attention to detail, whether it is in training or in life. "He would repeat his methods every time he found tiny problems in our training," Subi said.
This year, Subi is in the team under Paulo Nunes, a coach from Portugal. Nunes changed Subi's position from defender to defensive midfield. "I was not used to it at the beginning. He kept teaching me and showed me footage of top players in this position," Subi said.
He noted that putting on the national team jersey has always been his dream. He felt very proud the first time he represented China in a youth team match.
But not all the memories are good ones. In March, the Chinese U19 team lost to Vietnam and Thailand in international invitational games in Vietnam. Subi was the captain.
"Our Chinese players lack match experience in international games. We must play more high-level matches," Subi said. "Our players are capable, but we did not know what to do in such competitive games and we lost."
Chinese soccer has also come under a great deal of pressure from the public over its poor performances.
"As a national team player, I feel I am also responsible," Subi said. "But for me, I pay more attention to what I do on the field and being a good man, working hard to help my team and Chinese soccer."
Looking forward
Almost two years after he won the "Golden Boy" prize, Subi said the honor is now a thing of the past. "I should not only look at what I have won, as I have not achieved my dreams and goals," he said. "So I have to look forward and keep going."
He said that he watches every game of Luneng Taishan Football Club, one of the top teams in China's Super League. His favorite player in the team is Hao Junmin, current captain of Luneng and the Chinese national team who used to play for Schalke 04 in the Bundesliga.
"He is good on the field and keeps a low profile off it," Subi said, adding that Hao is his role model.
Outside China, he likes Puyol, Fabio Cannavaro and Sergio Ramos the most, as the three are all "tough and powerful players."
Subi also sees Mirahmetjan Muzepper, the first Xinjiang local to play for China's national team, as an idol. Mirahmetjan is the captain of Chinese Super League side Tianjin Teda and is also a Uyghur player fostered by Luneng soccer school.
"He is an example for every Xinjiang soccer player and the pride of all Xinjiang people… I hope to be like him in the future," Subi said.