Xu Bing: The Language of Art 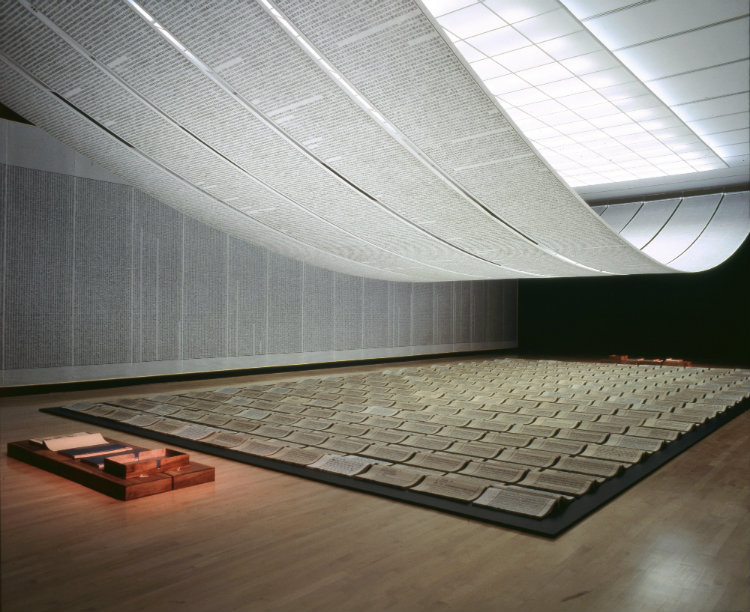 Xu Bing is much more than an artist: he is an inventor, an academic, a MacArthur foundation genius, and a quiet humanitarian philanthropist. His practice is rigorous, his thinking post-contemporary and his aesthetic diverse.

Born in Chongqing in 1955 but brought up in Beijing, Xu Bing’s childhood was spent on the campus of Peking University where his parents both worked. His talent for art was recognised early on and he became involved in artistic production supporting the political campaigns of the late ’60s and ’70s. In 1977 he began studying at the Central Academy of Fine Arts (CAFA) and, with hindsight somewhat fortuitously, was placed in the printmaking department rather than in his preferred major of oil painting.

In 1986, with strong foundations in calligraphy and print making and informed by Daoist, Western and post-modernist thinking, Xu Bing embarked on what has become his magnum opus, Book from the Sky (1987-91). Much more than a book, this is a four-volume tome, displayed as a monumental installation on every surface and suspended from the ceiling. It displays over 4,000 arduously hand-carved, completely meaningless ersatz Chinese characters. 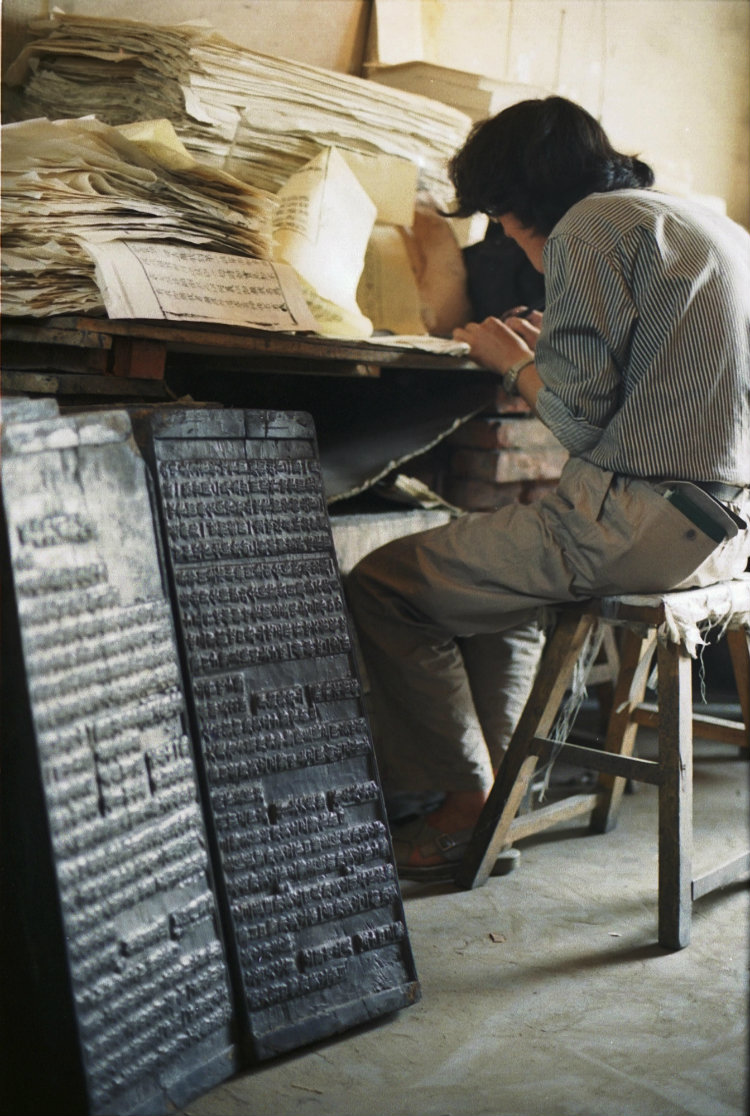 The artist at work

This work was the springboard for Xu Bing’s international career. In the early ’90s, Xu Bing, like many young Chinese artists at the time, moved to New York. Finding himself culturally displaced and living in a country where he struggled to learn the language, his mediations on the printed form, social communication, text and symbols, took on new inter-cultural meanings. Shortly after arriving in New York he recreated Book from the Sky in braille, extending his art to the blind, while in Square Word Calligraphy (1994-96), he invented a new language system, writing English words with the shape and strokes of Chinese characters. He covered one pig in gibberish words from the Roman alphabet and another in his invented Chinese characters and mated them together over piles of books in a performance piece entitled A Case Study of Transference (1994). And, in a highly forward-thinking move, given the prevalence of emojis as universal communicators today, he created Book from the Ground (2003), written entirely in symbols – a book that theoretically everyone in the world can read. 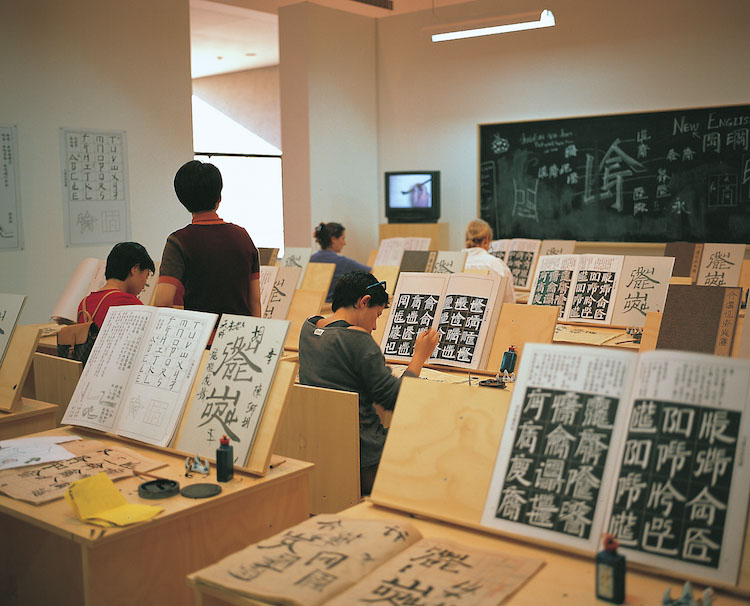 Universal literacy is not the only way in which Xu Bing asserts his populism. In Forest Project, (2005-09) he worked with schoolchildren in Kenya to make calligraphic drawings of trees in Swahili and English. He then provided an international platform to sell their works, raising money to replant the local forests. His large-scale Phoenix Project sculptures (2007-10) were constructed by Chinese labourers out of junk and rubble from construction sites and intended to hang in Beijing’s Central Business District. The work evokes the construction of the Chinese elite’s luxurious mansions by migrant workers, using outdated methods and working in impoverished conditions. The huge mythological creatures, suspended magnificently from the ceiling, testify to the skill of the working people and explore the interrelations of wealth and poverty, luxury and labour in modern China.

Finally, in 2008 Xu Bing returned to Beijing and to CAFA, where he served as the institution’s vice-president, shaping the artists and art of China’s future. ‘A new mode of civilisation is currently taking shape in China’ he said just before his return, and that it was high time to use ‘the nutrition of China’s new culture in my future creation’.

His recent work, Dragonfly Eyes, which also happens to be his debut feature-length film, is all about this new society. Opting for no director, cameramen or actors, the artist instead sourced thousands of hours of surveillance footage through China’s online security viewing platforms (including the recently closed down Shuidi Live Broadcast), and edited it down into drama. It’s a story of love, obsession, celebrity culture and online isolation, and scarily we may have all played a part.

Xu Bing at the UCCA

This exhibition will be the largest solo exhibition of Xu Bing held in Mainland China, displaying the artist’s oeuvre from the 1980s onwards. Highlights should include some of his early prints from the 1980s, which stylistically build upon the printmaking tradition of Lu Xun, the aforementioned Book from the Sky, and the interactive Square Word Calligraphy Classroom, where viewers will be able to learn to write Xu Bing’s unique English character system. Also exhibited are lesser known and rarely exhibited works from his career such as Slow-Moving Computer Platform (2003), a prescient piece designed to prevent a stagnant desk position in this screen-focused world.

When we spoke with co-curator Feng Boyi, he was keen to stress that this exhibition is not just about the works of art, or a timeline of Xu Bing’s work, but about the artist’s unique methodology, creative process and conceptual framework. How do mating pigs and illegible characters relate? The answer is clearly not in form, but in thought. Ultimately, however diverse, Xu Bing’s body of work comes together to speak of a broader theme: the relationship between human civilisation and human beings.

A brand new work: what to expect?

Excitingly, this exhibition promises us a work never seen before, that Xu Bing is still in the process of making. So what, if anything, can we expect?

Xu Bing, as he likes to say, is a person who has lived through several lifetimes. For him ‘art doesn’t come from life, it comes from living’, and his work has followed suit. His thinking is always one step ahead, prescient and alert as he anticipates society’s next move.

A rarely cited and somewhat avant-garde example of this inventor-like thinking is a work produced alongside the former director of the University of Wisconsin-Madison’s Chazen Museum of Art, Russell Panczenko. Here he created an installation piece based on the idea of cellphone-operated sex toys to overcome intimacy situations complicated by distance, well before such remote- and app-controlled vibrators were a thing – this was 2003!

Dragonfly Eyes also does exactly this. Conceptualised and embarked upon years before the current climate of data breaches, this invasion of privacy is so current that it strikes us to our very core. Xu Bing knew way before us that we live in a post-surveillance age: online, anyone can be watching.

Whatever we can expect, it is likely to be rigorously perceptive, given Xu Bing’s knack for tapping into deeper cultural concerns, often before they become mainstream. It is with this prescience that he remains one of most thought-provoking contemporary artists of a generation.