Year of the Pig's tastiest delights

Chinese New Year is the most important festival in China. The celebrations officially start next week, but the holiday spirit has arrived much earlier. 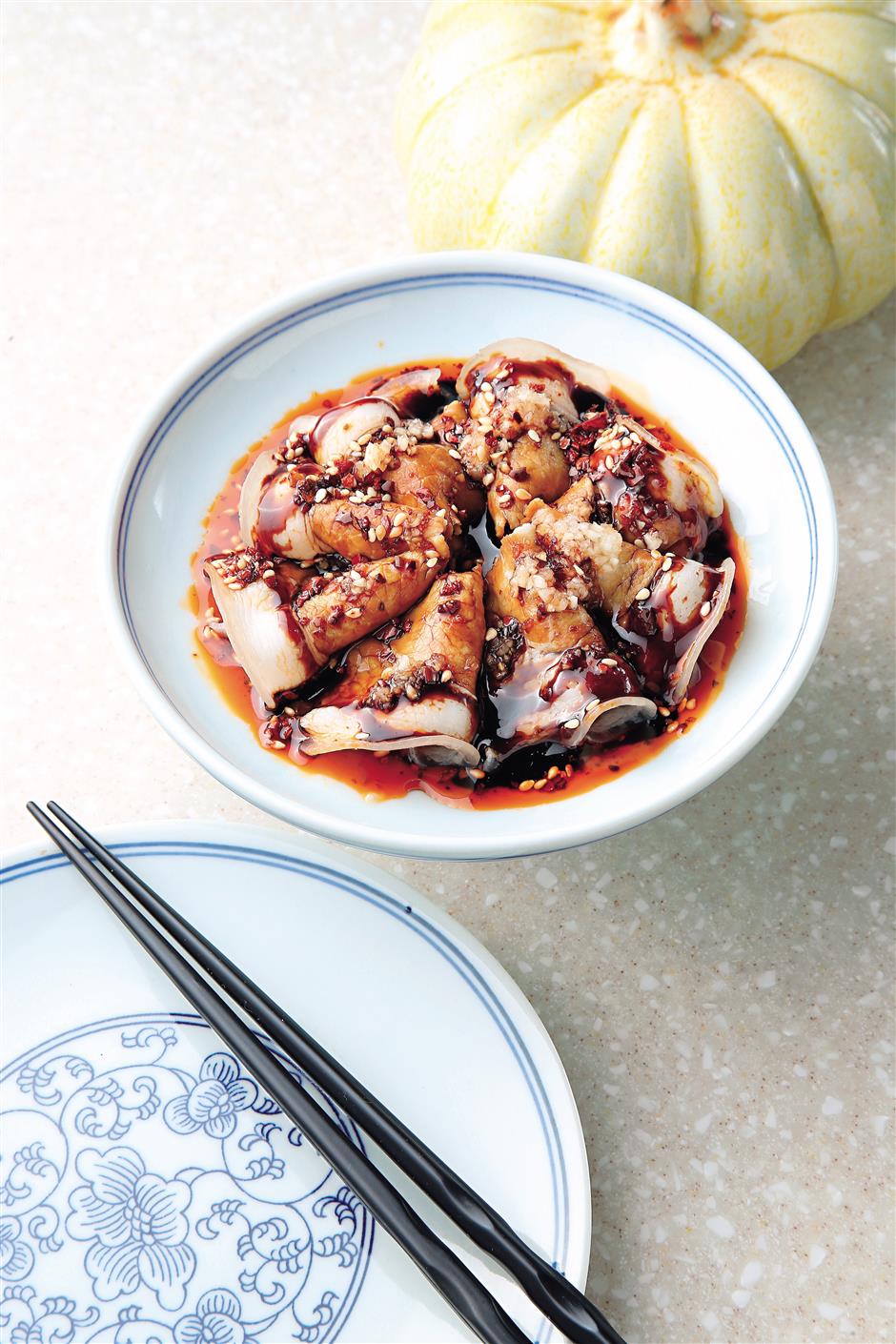 Brands have launched Year of the Pig limited editions, and numerous Spring Festival promotions and events are featuring the pig.

The pig is the last Chinese zodiac of the 12-year cycle, and it’s one of the tastiest.

China is the largest pork consumption country in the world and home to half of the world’s pig population.

Since ancient times, the pig has been an important cultural and culinary element of Chinese New Year. In many parts of China, especially in the rural villages, killing and butchering a giant, mature pig is a celebratory and ritualistic event just before the new year.

A few decades ago, eating pork for the Chinese New Year was very special. In the era when there was material shortages, Chinese New Year was the only occasion when many families could butcher a pig and eat pork. Some poor families had to sell most of the meat and only left a small portion to eat during the holidays.

A good day must be picked to carry out the task, usually it’s scheduled between 25th and 27th day of the 12th month on the lunar calendar. The hosts would entertain the butchers and other villagers with a sumptuous meal of different pork dishes. 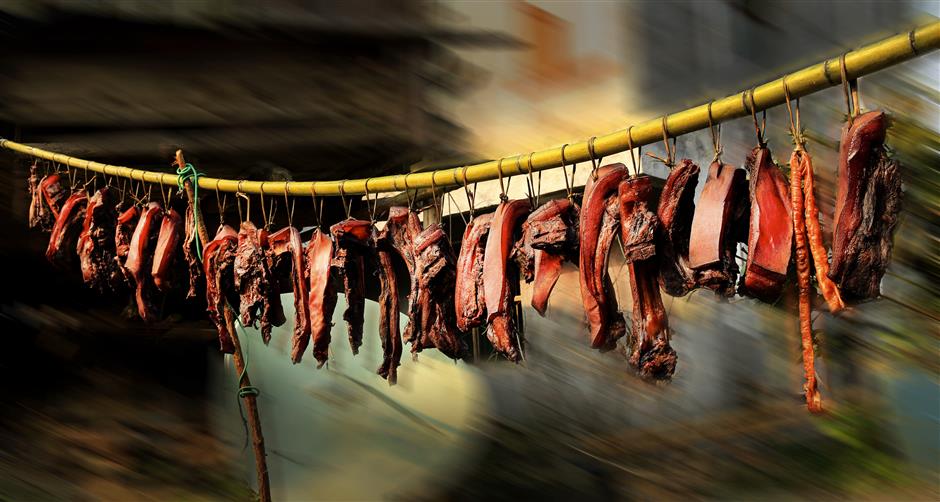 Across China, people cure pork meat to preserve for a longer time.

Every part of the pig is used in cooking, from the head to offal, even the fat is kept for making lard.

In northeast China, there’s a traditional stew called shazhucai, which translates as “pig butcher dish.” It’s made and served when the pig butchering event is hosted, and the recipe utilizes different parts of the pig and pig blood sausage. The meat is paired with pickled Chinese white cabbage, or suancai, to balance the flavor.

When the pig is butchered and assorted for future use, some of the meat would be cured or made into sausages, which can be preserved for a longer time in winter. The various cured meats hang outdoors under the roof until they are all cooked and eaten.

In some places, pig’s head is a dish served on the second day of second month of the lunar calendar, the day known as longtaitou, or dragon raising its head. Eating pig’s head expresses wishes for a bumper harvest in the new year.

The Chinese New Year’s Eve dinner is the most important meal of the Spring Festival celebrations, where families gather together to enjoy an abundant dinner. Across China, various pork dishes are often served as the main entry.

Starting with appetizers, sliced boiled pork with garlic paste sauce is a real crowd pleaser. The dish is made by boiling high-quality pork belly meat with ginger, scallion and a little cooking wine, then slicing the cooked meat thinly to serve with a dressing of garlic paste, soy sauce, sugar and sesame seeds. 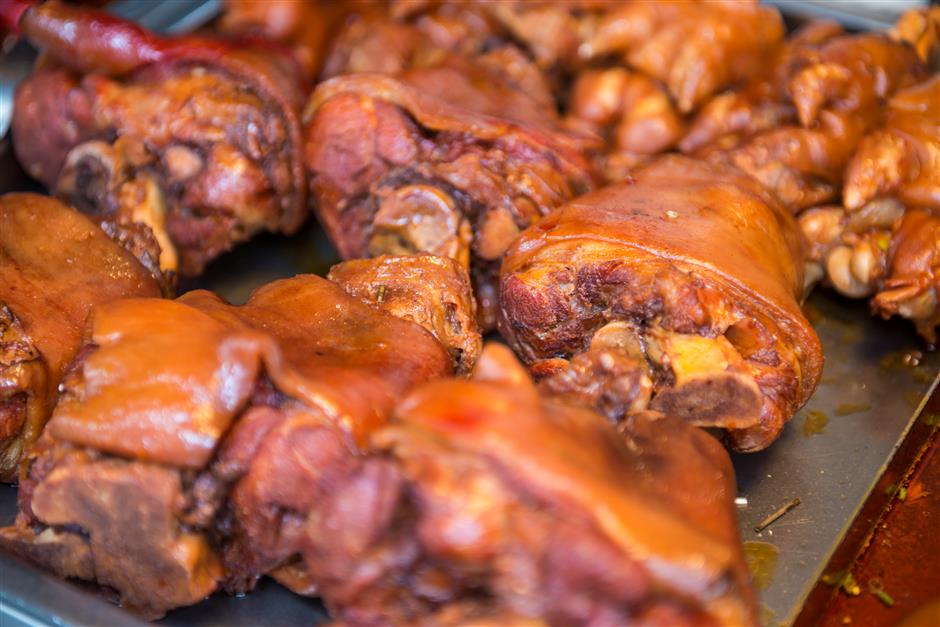 Pork knuckle, also known as ham hock, is often highlighted at Chinese New Year’s Eve dinners. In places like Zhouzhuang, a water town in the lower reaches of the Yangtze River, eating pork knuckle is a tradition that has passed from one generation to the next for hundreds of years.

Pork knuckle is an inexpensive cut of meat and once considered a poor man’s food, it’s usually cheaper than pig trotters. The pork knuckle meat is quite fatty and rich, so it must be cooked appropriately to avoid greasiness and flavorless meat.

There are two important tips in making pork knuckle dishes: proper seasoning and sufficient cooking time, so stewing is an easy and popular method many people prefer.

A large amount of seasonings and herbs are added to give the meat more flavor, and it commonly takes five hours of simmering over a low heat to tenderize the meat. An ideal stewed pork knuckle should have meat falling off the bone easily.

Crystal pork knuckle slices is another classic Chinese pork knuckle dish that’s often served as a cold appetizer at formal dinners. It’s made by boiling the pork knuckle with condiments, removing the bone and then wrapping the meat tightly in plastic wrap and letting it cool. The meat roll would then become very tight and it’s sliced and served with a dipping sauce. 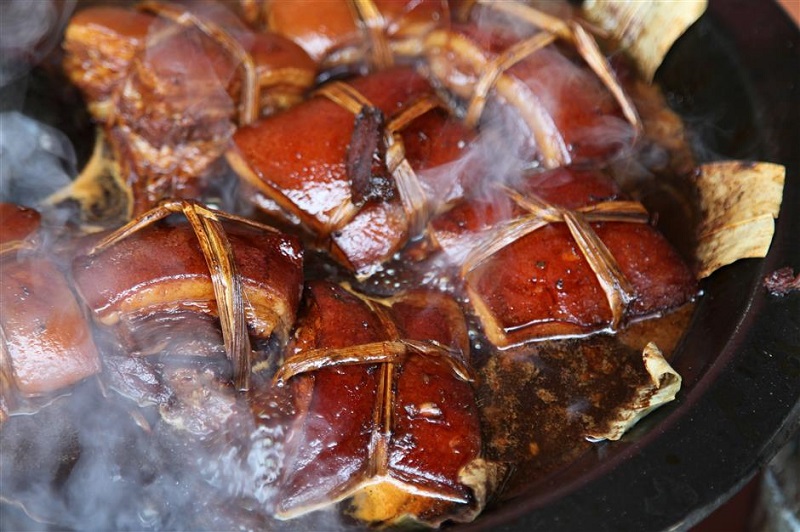 Poet Su Shi (1037-1101) from the Song Dynasty (AD 960-1279) is a well-known pork lover. Back then, pork was a cheap meat, and the not-so-wealthy poet wrote verses about cooking pork cuts that the rich disdained and the poor didn’t know how to cook properly. 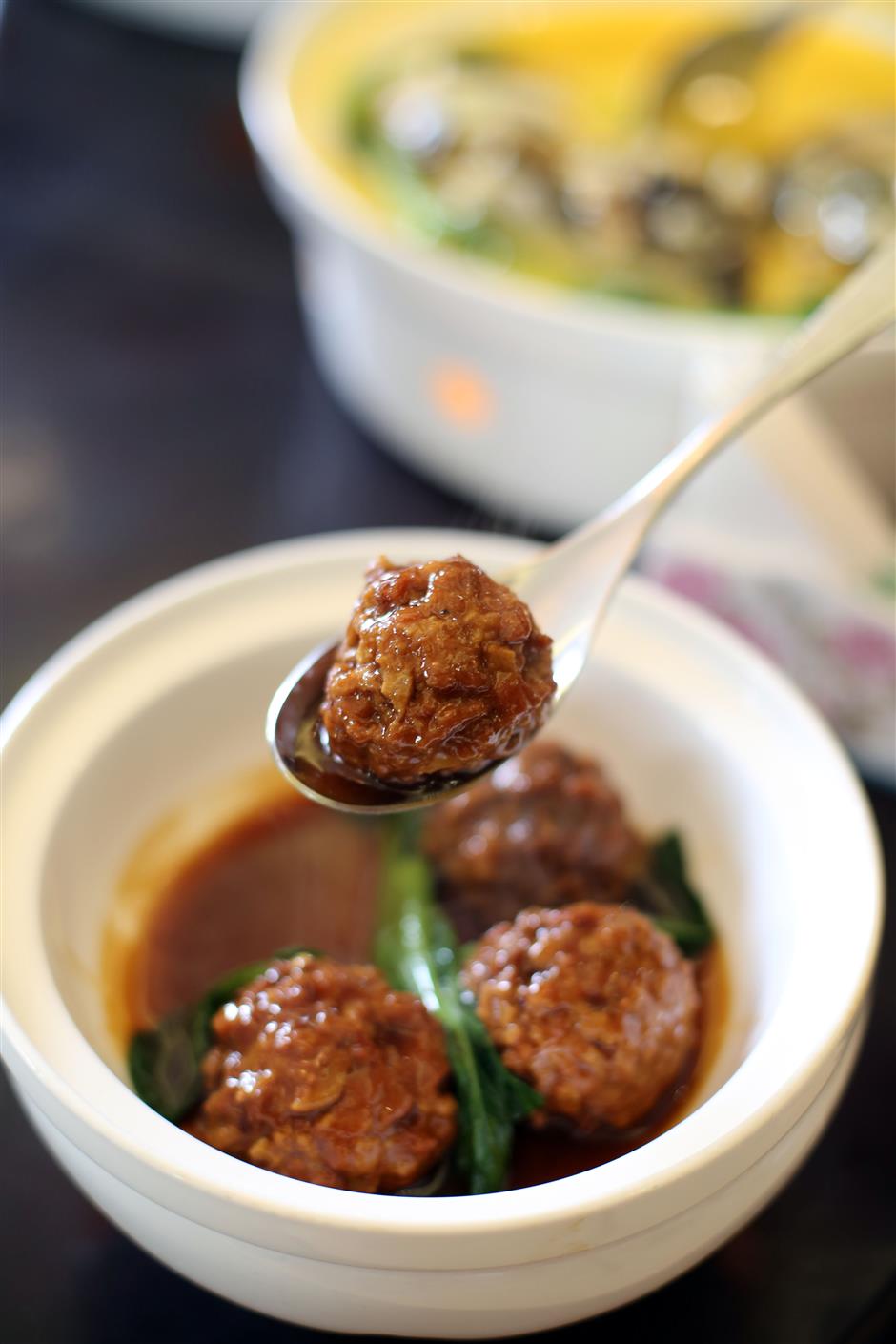 There are two pork dishes named after the poet, Dongpo pork, which is braised pork belly meat, and Dongpo pork knuckle, a dish that boils, steams and stews the pork knuckle.

People love meatballs, and what’s better to wow the family with the giant lion’s head meatballs? This classic dish from Yangzhou is made of minced pork and the extra-large meatballs are lightly fried and then braised in a rich sauce. Little cubes of water chestnut are also added in the meatball mixture to improve texture, and the pork should not be minced too finely.

To be even fancier, the lion’s head meatballs can be served as a soup dish presented in small bowls for everyone at the dinner. The lighter colored meatballs are stewed in a clay pot with chicken stock over a low heat for around two hours, then the soup is seasoned and served with some green vegetables.

Fried crunchy pork is a crowd favorite during Spring Festival. The strips of pork meat are seasoned, battered and deep-fried so there’s a crunchy shell. It can be served hot as it is steamed or added in soups. 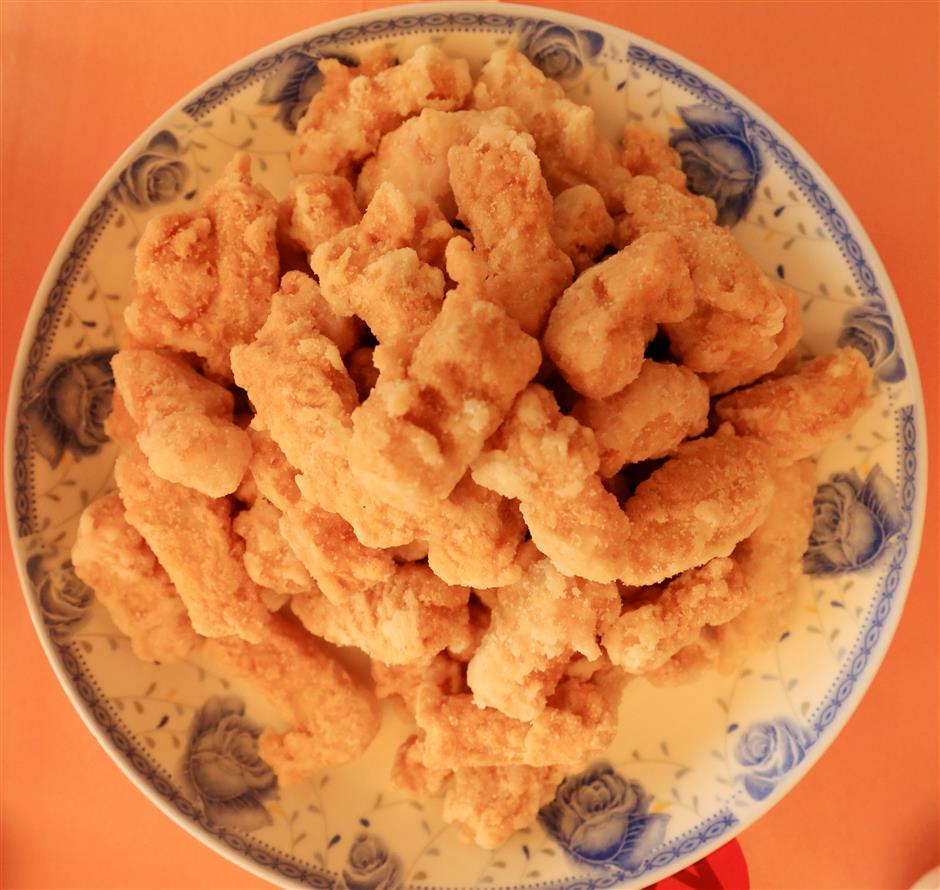 Cured meats are signature Chinese New Year dishes, different cuisines have their own versions of cured products, and pork belly is one of the most popular, as the flavor and texture of the meat is changed over time, and when steamed or stir-fried, the fatty part would become transparent and much more flavorful.