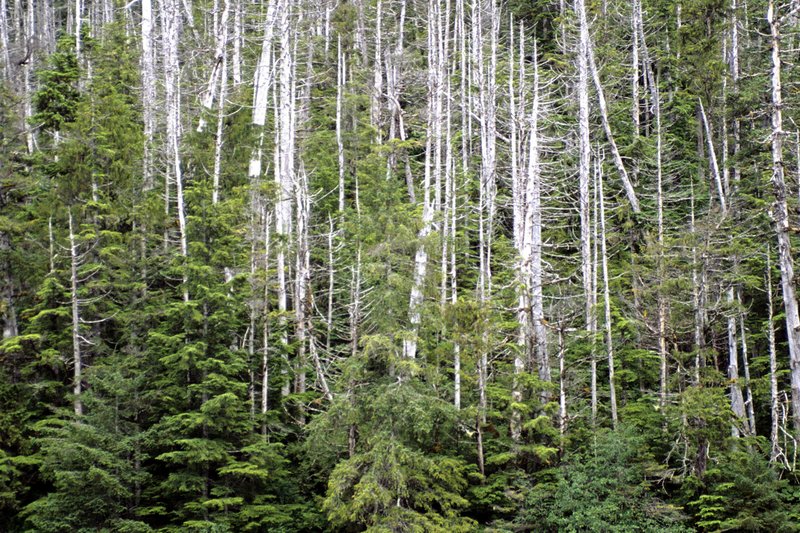 An iconic Alaska tree with roots that can freeze to death if not covered by snow was rejected Friday by a federal agency for the threatened species list.

The U.S. Fish and Wildlife Service said that yellow cedar does not warrant additional protections because trees will persist in areas where climate change does not affect the trees.

Warming affects trees in less than 6 percent of yellow cedar range that stretches along the Pacific Coast from northern California to Alaska’s Panhandle, according to the agency.

“Despite impacts from effects of climate change, timber harvest, fire, and other stressors, the species is expected to persist in thousands of stands across its range, in a variety of ecological niches, with no predicted decrease in overall genetic diversity into the foreseeable future,” the agency said in its determination.

A spokeswoman for the Center for Biological Diversity, one of the groups that petitioned for the yellow cedar listing, called the decision reckless and a blow to the Tongass National Forest, the nation’s largest.

“Alaska’s yellow cedar are suffering a double-whammy from the climate crisis and intensifying logging in their stronghold on the Tongass,” said Shaye Wolf in an email response to questions. “Instead of protecting these ancient trees, the Trump administration is fueling the key threats to the species with its reckless climate denial and logging assault on the Tongass.”

A research review done for the Alaska Department of Fish and Game indicated that 12 percent of yellow cedar range in Alaska is affected with 70% to 80% cedar mortality in those areas, she said. Die-offs are projected to worsen, she said.

“If urgent action is not taken to reign in carbon pollution, by 2070 yellow cedars may no longer be able to survive in half the areas in their range that are currently climatically suitable, with 75 percent of yellow cedar forests in Alaska experiencing unsuitable conditions,” she said.

Yellow cedar trees can live more than 1,000 years and are a key part of southeast Alaska Native culture.

Native Alaska Tlingit, Haida and Tsimshian people use the rot-resistant wood for canoe paddles and totem poles. They take lengthwise strips of bark from living trees for weaving baskets and hats, and as backing in blankets. The trees can recover after the bark strip is removed and continue growing.

The listing petition, filed in June 2104, said that across 781 square miles (2023 sq. kilometers) of Alaska’s Panhandle, more than 70 percent of yellow cedar trees had died because of root freeze induced by climate change.