CULTURE Yogurt and Hadas - Celebrating the Shoton Festival in Lhasa

Yogurt and Hadas - Celebrating the Shoton Festival in Lhasa 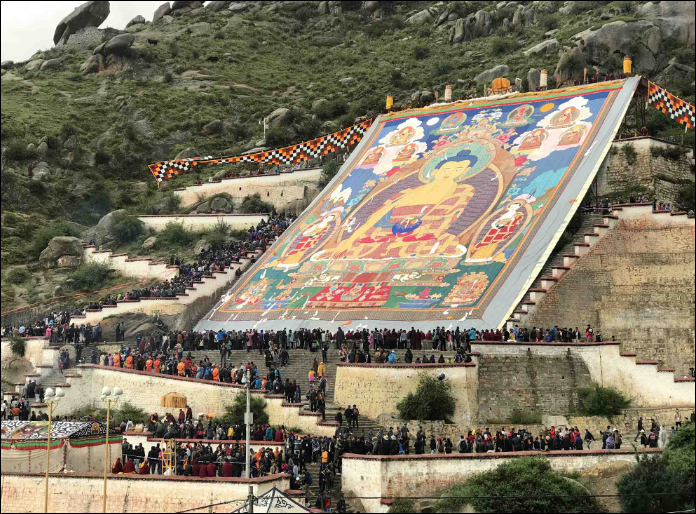 Thangka is painted using ground mineral pigment on cotton or silk. It functions as one of the principal meditation tools in Buddhism. (Photo: CGTN)

As per the Gelug Sect of Buddhism, lamas must stay inside the monasteries between April and June.

Buddhists believe that it is wrong to hurt living beings and that includes even the smallest of insects that are prevalent during the summer months.

When the period ends, the laymen offer the lamas yogurt in celebration.

Most of us spend all year eagerly awaiting the summer and the prize that comes with the end of long cold winter -- cool summer breeze and the healing warmth of the sun. We can't wait to get outside and soak up the sun!

But for the Gelug Sect of Buddhism in China's Tibet Autonomous Region, the summer is not meant for enjoying warm breeze but it's exactly the opposite. According to the Tibetan calendar, from April to June the lamas maintain a meditative hibernation indoors, during which they must stay inside the monasteries to avoid killing even the tiniest of animals or insects.

As the lamas emerge from the monasteries for the first time in months, their loved ones meet them with a special gift -- yogurt. That's why the Shoton Festival is also called the Yogurt Festival.

The reverberation of a horn awakens the tranquil valley, marking the beginning of the celebrations. Dozens of lamas work together to carry a massive thangka, a Tibetan Buddhist painting made from cotton and silk, toward the Drepung Monastery to exhibit the enormous piece of art. It's taken out only once a year, at this time. The worshipers are eager to help bear the weight of the massive scroll, viewing it as a great honor and believing that Buddha will bless them for the contribution.

The painting is slowly unveiled and displayed on a gigantic platform. People offer their hadas or silk scarves by throwing them before the painting. It's an incredible spectacle with hundreds of white scarves flying through the air. The painting is only out for a couple hours. Once it is rolled up again, no one will get to lay eyes on the artwork again until the following year.

Visitors should acclimatize to the altitude

Due to Lhasa's high altitude, we arrived a few days before the Shoton Festival to give ourselves some time to acclimatize to the elevation and avoid altitude sickness. So, if you're planning a visit to Lhasa don't forget to bring comfortable walking shoes because you'll be doing quite a bit of climbing.