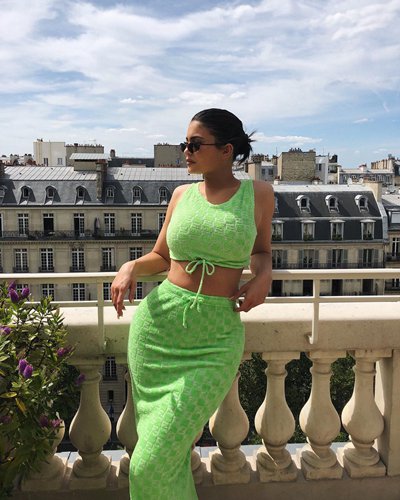 Aged just 20 and the youngest member of the extended reality TV Kardashian clan, Kylie Jenner is on track to become the US' youngest "self-made" billionaire, Forbes revealed on Wednesday.

The young mother, who gave birth to daughter Stormi in February, set up Kylie Cosmetics two years ago and the company has already sold more than $630 million worth of makeup, the magazine said.

Forbes conservatively valued her company at $800 million and raised her overall worth to $900 million by throwing in earnings from television programs, endorsements and after-tax dividends.

Jenner owns 100 percent of the company, which started out with a $29 "lip kit" - matching set of lipstick and lip liner that traded on her trademark pout.

She's already the youngest person on Forbes' list of richest self-made US women and another year of growth would make her the youngest self-made billionaire ever, beating Mark Zuckerberg, who crossed the threshold at the age of 23.

"Thank you @Forbes for this article and the recognition. I'm so blessed to do what I love everyday," she tweeted next to a photograph of the cover story.

Her success has been attributed to her fame and ability to leverage social media. She has more than 110 million followers on Instagram, 25.6 million on Twitter and 16.4 million follow her company directly.

Forbes said the firm has only seven full-time and five part-time employees, with manufacturing, packaging and sales outsourced, and momager Kris Jenner handling the business side in exchange for a 10-percent management cut.

"As ultralight startups go, Jenner's operation is essentially air. And because of those minuscule overhead and marketing costs, the profits are outsize and go right into Jenner's pocket," Forbes wrote.

Forbes said she used $250,000 earned from modeling to pay a company to produce the first 15,000 lip kits, which she spent months teasing on Instagram. They sold out in less than a minute at the November 2015 launch.