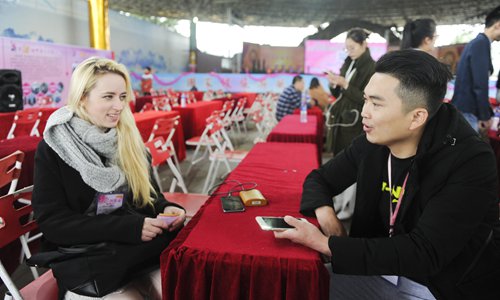 A Chinese man talks with a Russian woman at a blind date event in Dongguan, Guangdong Province. (Photo: VCG)

Terrified of being bugged by parents' questions of why she's still single, a Chinese girl photoshopped a picture of her and a celebrity to pretend to have a boyfriend. Her move resonated among many single netizens, who share the same fear as Chinese New Year approaches.The netizen admitted on Sina Weibo on Tuesday that she photoshoped the picture with Chinese actor Liu Haoran to stop her parents from setting her up on blind dates during her trip home for the Spring Festival holiday. She finally admitted what she did after learning that her father was already practicing his speech for her wedding with the fictional boyfriend. Upon learning of their daughter's action, her parents were calm but obviously didn't get the point, saying they would still arrange blind dates for her. The video clip of her story received 200 million clicks in the first 21 hours since going online.Young Chinese have mixed feelings about Spring Festival, a holiday which symbolizes harmony and reunions. Young people, especially singles, fear the upcoming of the festival due to relatives' repeated bugging and "discrimination" and matchmaking during this period. A survey of single Chinese in 2018 released by Zhenai.com, one of China's most popular dating websites, shows that 85 percent of people mainly  26 to 30 years old have been urged to get married.Many "rebellious" singles came up with various ways to cope with the awkward situation, such as renting a "partner" to come home with and lying to their parents. However, some singles choose to surrender to their parents, with 44 percent accepting the arranged dates while only 5 percent strongly against it, the survey said. At the beginning of Spring Festival travel rush, many home-bound netizens made memes about pushy matchmaking on Weibo to show their unwillingness to go home to face the cruel reality.