Nobody ever imagined that after being lost for more than half a century, the intangible cultural heritage handicraft known as Gaolou mixian would be resurrected and passed on by a young 33-year-old man.

"As a descendant of people from Gaolou village, I have the responsibility to restore our ancestors' art forms," Chen Guorui, the world's only inheritor of this ancient art, told the Global Times.

In 2018, it was officially included on the Fuzhou Intangible Cultural Heritage List.

From food to art

Gaolou mixian is a unique folk art that developed during the Qing Dynasty (1644-1911). For more than 100 years, it had been handed down in Chen's hometown of Gaolou village in Fuzhou, East China's Fujian Province. 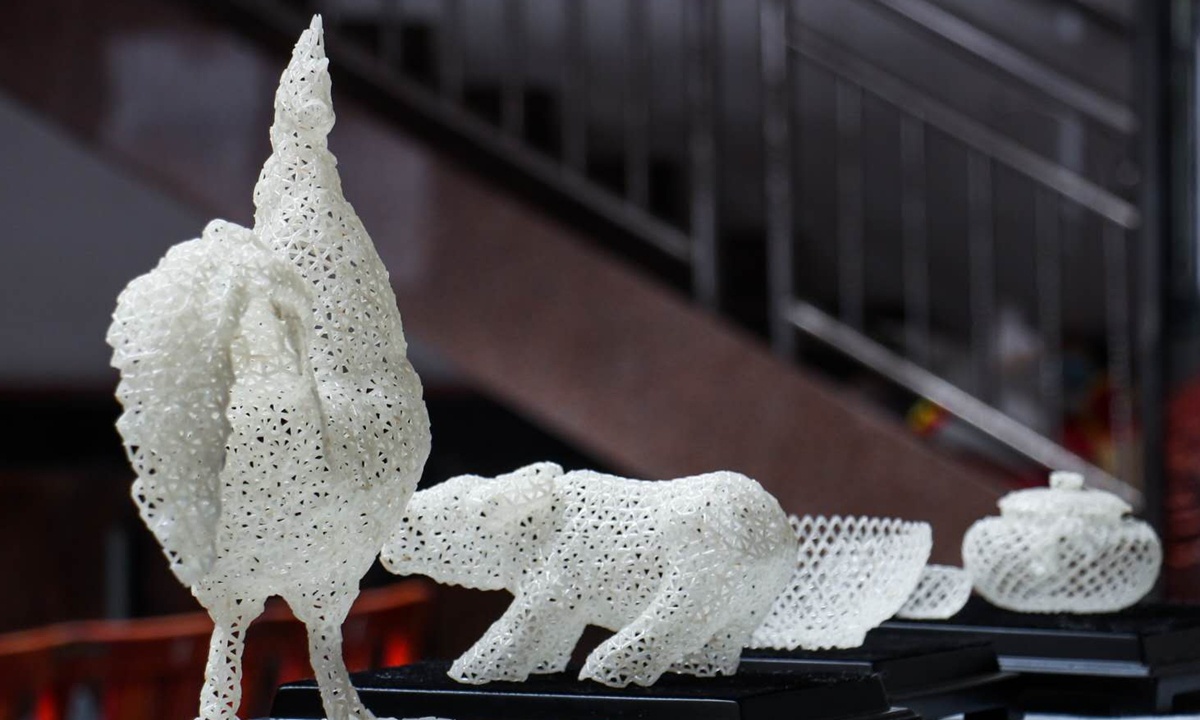 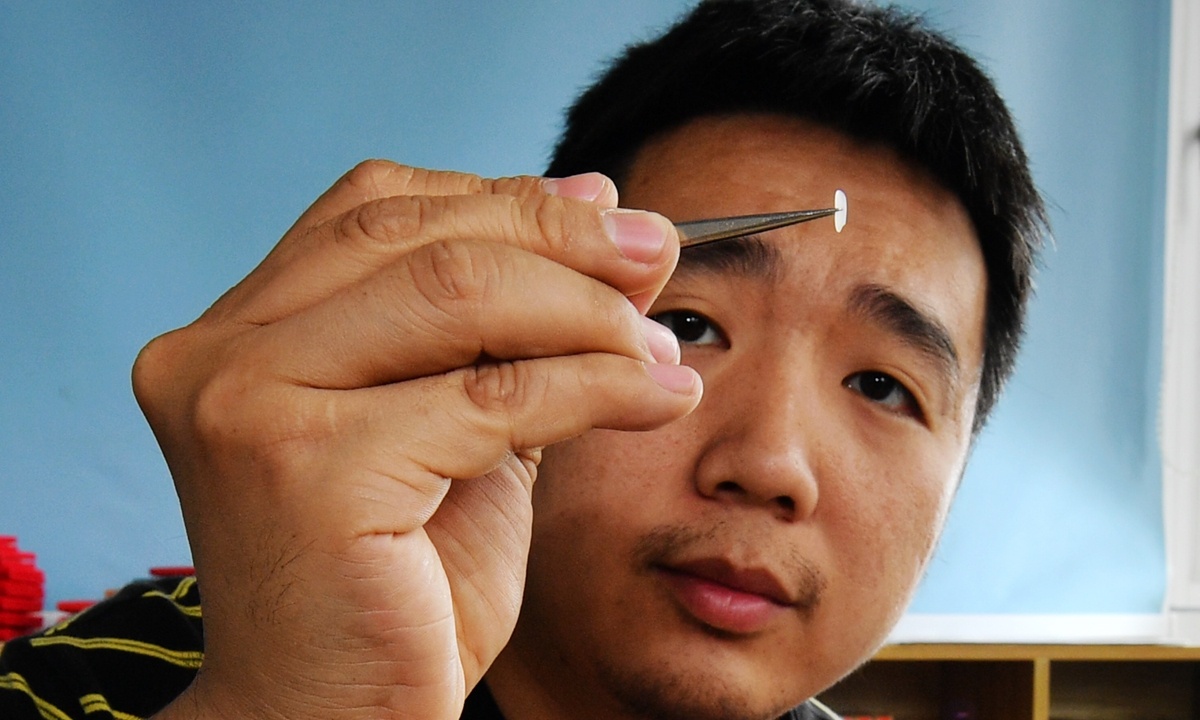 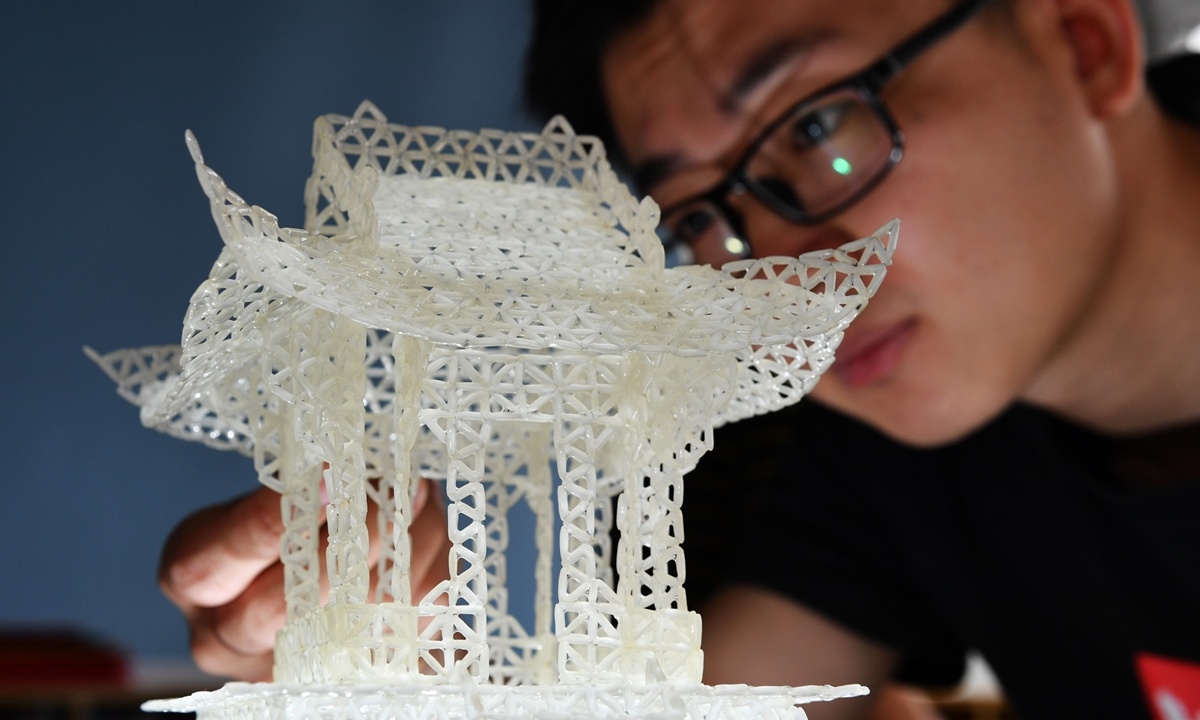 According to the reports, the folk art originated with an elderly woman from Gaolou village. She used rice and rice paste to create exquisite artworks, which gained the appreciation of the Empress Dowager Cixi, who ruled China for 47 years as its de facto ruler during the late Qing Dynasty.

Under the influence of the Empress Dowager Cixi, the techniques used to make the rice works spread widely throughout the village, leading to its name.

These works were later used during ceremonies paying respect to one's ancestors and so were commonly seen in the village's ancestral halls.

The art form reached its peak during the Republic of China period (1912-49). Each household would make rice structures that they put on display in their ancestral halls during Chinese New Year, attracting people from all sides to watch.

Local authorities even held competitions to choose the most outstanding masterpieces, with the winners walking away with a monetary prize.

However, due to the wet weather in southern China, these rice-made artworks would only last three to four months before becoming moldy and losing their shape. It is for this reason that these works are not seen in museums in China.

Due to various historical reasons including the War of Resistance against Japanese Aggression (1931-45), most descendants in the village did not pass down the art form, causing it to disappear for nearly 70 years.

Chen told the Global Times that many of the residents of Gaolou village have emigrated overseas. He found out about the art form after hearing one former resident who had returned to the village for Chinese New Year lament its loss.

Curious, Chen started to do research and tried to make some works using the methods he heard about from older people in the village.

"The museum only has written records to prove the existence of Gaolou mixian, but it did not record the specific methods of making the work," Chen said.

According to Chen, the first step involves drawing sketches and brain storming ideas. For the second step he selects the plumpest and most transparent rice grains he can find for building material and cooks rice paste. The third and most involved step sees him painstakingly paste each grain of rice together to slowly form whatever object he has chosen to create. For the last step, a modern addition, Chen sprays his finished structure with epoxy resin to insulate the rice and keep it from being damaged by moisture and oxidation.

Chen noted that ancient Chinese used to use a type of wild rice whose grains can be up to 15 millimeters in length, but the rice he is able to buy today is only about 7 millimeters long, so he must use more grains of rice to make his structures.

A work usually takes about a month and 2,000 to 3,000 grains of rice to make, although some structures can use considerably more. For instance, one rooster, Chen's first three-dimensional work, was built from 10,000 grains of rice.

Over the past five years, Chen has gradually improved his skills and even began using new techniques, such as using dyed grains of rice to create some colorful artworks.

Since 2017, people from home and abroad have taken an interest in this long-lost handicraft.

"The ancestral hall usually can accommodate tens of thousands of people, but one year I couldn't even squeeze inside," Chen recalled.

Chen said that he worries that the revived art form will not last long if he is the only successor. To prevent him from being the last inheritor, Chen has been giving classes to some students at a primary school in Fuzhou with the support of local education authorities.

To prepare for the 44th session of the World Heritage Committee of UNESCO, which was initially scheduled to be held from June 29 to July 9 in Fuzhou, Chen increased the number of classes from two per week to two per day.

"Gaolou mixian has stood witness to the history of my hometown. I hope I can have the opportunity to hold an exhibition overseas to allow more people enjoy its beauty," Chen said.