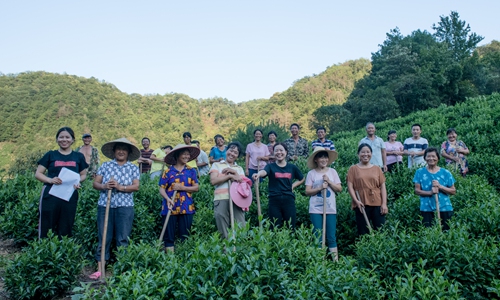 Raised in a mountain village in Qimen county of East China's Anhui Province, Jiang Xuexia was enrolled to a university in Hefei, capital of Anhui in 2004, and worked in a Fortune 500 company in Shanghai after graduation.

"In the tea harvest season, my parents and other folks would go to pick tea in the mountain regardless of wind or rain, but sometimes they had to sell tea at a low price, which stung my heart," Jiang told the Global Times.

"I felt obliged to change the situation of my village as the first college graduate there, so I did market research and analysis, and returned to my hometown to sell black tea," she said.

In 2014, Jiang and her two sisters returned to their hometown to start their tea business in Qimen, the renowned origin of black tea.

The company they invested in more than 1 million yuan ($143,000) only produced 2,500 kilogram tea leaves with zero profit in the first year because the quality failed to meet Jiang's standard.

"My two sisters and I grew up in a tea plantation and know something of tea picking and producing, but we still encountered many obstacles to enter the tea market," said Jiang. The three sisters visited tea factories in Anhui and other provinces to acquire experience and skills. They also went door-to-door, visiting experienced tea farmers.

A new product developed in the same year provided another 60 job positions for villagers, apart from the existing 45 positions with a daily income of 150 yuan.

"A villager with bad eyesight wanted to do tea packing, so I offered her the position and encouraged her. She became skillful day by day and was happy to make money with her own hands," said Jiang Xuexia.

Because of the three sisters' promotional efforts, many of the company's customers and tea lovers would like to visit their hometown.

To improve tea quality in plantations, Jiang launched a training class for her local tea farmers. The training is now attended by many farmers from other provinces.

Jiang hopes that her company can lead more tea farmers to a better and happier life.

During Zhu Mingqiang's doctoral study at Northwest A&F University, he realized the values of Eucommia ulmoides Oliver, an herb which is dubbed a "gold plant" with multiple functions and huge market potential. China has more than 95 percent of the world's Eucommia but only 20 percent of them are in the market.

In 2009, Zhu organized a team for Eucommia' high-value-added utilization, and discovered an environmental friendly method to extract useful chemicals from Eucommia ulmoides. A series of discoveries made by Zhu's team laid a foundation for different products development.

Zhu started four companies on Eucommia products research, development, processing and distribution. With a production line that produces 4,000 tons of Eucommia drinking powder a year, Zhu's companies have exported their products abroad to such countries as Japan and South Korea.

"I am a farmer-entrepreneur, and focus on the development and exploitation of traditional herbal medicine Eucommia," Zhu told the Global Times. "I hope to promote the medicine to the whole country and the world," he added.

In a plant in Shima village of Ji'ning city of East China's Shandong Province, Fang Cheng was checking a scorpion's pregnancy with tweezers. The 6,000-square-meter plant is full of scorpion nests.

In the summer of 2008, Fang would have sought to study abroad instead of breeding scorpions to support family if it was not for her family's financial crisis.

After overhearing that raising scorpion is profitable, clean and easy to sell, Fang decided to give it a try.

"In 2008, the price of scorpion was 200 yuan per kilogram," Fang said. However, she did not even have enough money to start the business since her family was in debt and she had no savings.

"A classmate lent me the money, which saved my business," said Fang, adding that because of the long raising period of scorpions, the borrowed money ran out soon, and her parents sold their factories to support her.

After solving financial issues, Fang encountered technical problems. "I had to explore step by step," she said. It took her two years to accumulate some experience to keep the scorpions alive.

She also shared her scorpion breeding experience. Many people came to her to learn how to make money by raising scorpions. With the expansion of her scorpion raising business, Fang dived in deeper to the world of scorpion production. She diversified her business to cover scorpion jerky, spirit, sauce, and even decoration.

"It was very difficult in the first several years, and it was my friends' help that supported me to achieve what I have today," Fang recalled, adding that she has been financially sufficient for some time and hopes to help others.

In 2017, Fang established a poverty-alleviation scorpion breeding workshop, and donated the profit gained from the workshop to a total of 77 underprivileged families. In the past three years, Fang has donated 48,000 yuan to these families.

Promote hometown to the world

Cooking special delicacies and documenting the poetic rural life in Southwest China's Yunnan Province, Dong Meihua, seized the opportunity brought by short videos. She uses short videos to display the beautiful sceneries and delicious food of her hometown to the whole world.

Born and raised in a mountain village in Yunnan's Baoshan city, all she wanted during her childhood was to get out of the village.

After graduating from Sichuan Police College in Southwest China's Sichuan Province in 2010, she became a police officer, and was awarded many times for her excellent performance in several disaster and accident rescues.

However, she had to return to the village in 2016 when her father had a heart attack.

From that moment, she started to share her life in the mountain village via videos online.

Yunnan delicacies and customs were displayed in the five to 10 minutes videos and most of the scenes were shot in her own home - a two-story wood building with a yard.

Without special scenes and story plots, most of her videos examine daily life, her family and her dog. Sometimes she climbs up a mountain with her younger brother to pick fruits, and sometimes she goes down to a pond to catch some fish to cook a daily meal for her family.

She was granted the title of cultural and tourism promotion envoy of Baoshan city on January 8. In the award ceremony she said that she will use new media platforms to promote her hometown and make more contributions to its development.