Picture a young woman, dressed in traditional Chinese attire made from hemp, as she picks flowers from a field to make a natural blush for her cheeks. Imagine the same person, assembling a sofa from bamboo, brewing soy sauce from scratch and cooking up all sorts of delicious Chinese food. 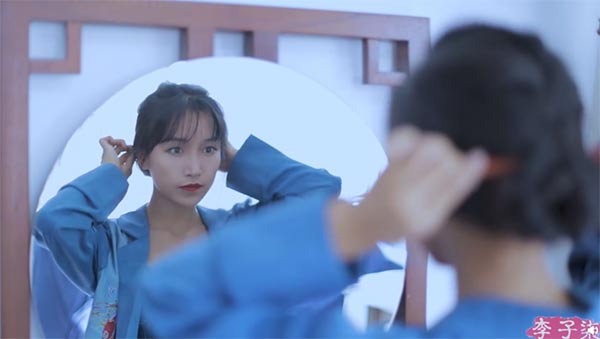 It may sound surreal, but such a person exists in real life, and her name is Li Ziqi.

Li, a vlogger who enjoys a fan base of more than 21 million people on Sina Weibo and 7 million strong followers on YouTube, has made a name for herself in her videos that highlight a traditional Chinese way of life in the rural areas of Sichuan province. Her videos cover a wide variety of crafts related to traditional Chinese culture. From making paper and ink to weaving cloth, from making a silk quilt comforter for her grandmother to building her own bread kiln with blocks, nothing seems impossible with Li's crafty hands as they work their magic to bring these things into existence.

But Li's most eye-catching, and mouth-watering craft is cooking. A scene from Li Ziqi's video.

Li scarcely speaks in her videos. When she does open her mouth, the most common phrase that comes out is her calling her grandmother to come and eat.

Instead of dialogue, Li focuses on how she works with her hands.

Scenes of the young vlogger picking seasonal ingredients from her own garden (and sometimes in the mountains and rivers near her residence) and turning them into luscious dishes on her wood-fired wok dominate her videos. A warm bowl of soup for the winter, a lighter plate of noodles for the summer. Li emphasizes the seasons in her cooking, as China's traditional 24 Solar Terms also do, and makes food suitable for the particular climate.

All this is done against a picturesque panorama of the four seasons beautiful enough to be featured in films.

Watching her videos, it is difficult not to appreciate their beauty and hold back that sense of nostalgia and longing for home. But it is even harder to not want to take a bite of her succulent dishes. 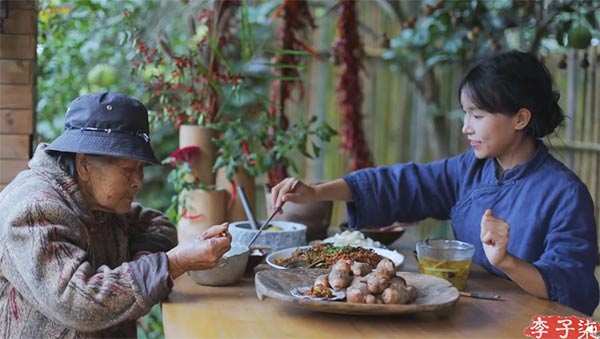 Li Ziqi (right) and her grandmother.

Cynic food critic Anton Ego in Ratatouille was immediately brought back to his childhood after he took a bite of Remy's humble masterpiece. And it is true that the taste of home is almost unforgettable. Brewing soy sauce, steaming sweet buns, sun-drying persimmon cakes and pickling vegetables, every scene is delicate and gentle, reminding viewers of taste of our childhood and home.

"My heart warmed up as I watched her flip soybeans in the video for making soy sauce. I was really moved. I used to do this kind of work when I was young," comments Weibo user July of Jiangnan.