CULTURE Youth from around the world share their stories about China

Youth from around the world share their stories about China 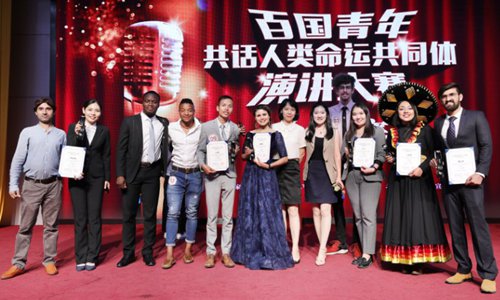 The finals for a speech contest themed "Telling Good Stories with China - The World's Youth Speak about a Community with Shared Future for Mankind" was held at the Beijing Language and Culture University on Friday, a move to deepen cultural communication between China and other countries.Numerous youths from around the world participated in the contests leading up to the final During Friday's final round, 15 participants from countries including Italy, Spain, Japan and France spoke in Chinese to express their understanding of the China-proposed concept of a Community of Shared Future for Mankind and share their stories and views about how the rapidly developing country has been involved with the world. Mendbayar Bolor-Erdene from Mongolia said that a "shared future" means countries should take measures that are conducive to global interests and solve global problems through joint cooperation in response to complex global economy. Maksim Luppov from Russia shared two-generations' views of China by telling a story about himself and his father and the changes they saw during their time in China.Muhammad Salman Haider from Pakistan talked about China's "four modern inventions" - online food delivery, mobile payments, shared bicycles and high-speed rail - and how they have made his time studying in China more convenient. Alessandro Martini from Italy won the special prize, while the top three winners were Mendbayar Bolor-Erdene from Mongolia, Nguyenquoctu from Vietnam and Julien Fabrice Bonzon from France.