China's Yungang Grottoes will complete the scanning of all its caves in five years, paving the way for the creation of digital versions that can withstand weathering and other real-world damage. 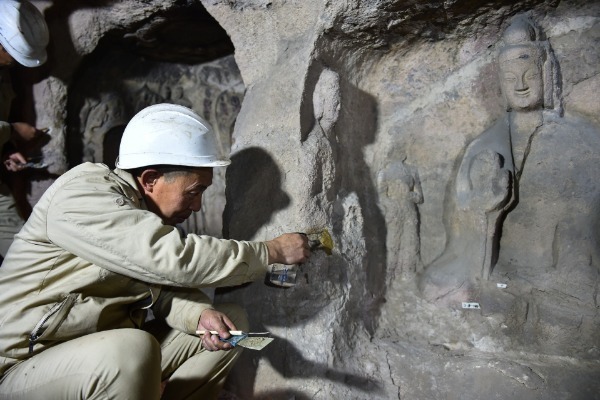 The Yungang Grottoes, located in the city of Datong, Shanxi province, has 45 major caves and more than 59,000 stone statues. With a grotto complex stretching about 1 km from east to west, it is one of the largest ancient grottoes in the country. (Photo: Xinhua)

So far, the UNESCO World Heritage Site in Shanxi province has completed three-dimensional scans of one-third of its Buddhist grottoes, according to the Yungang Grottoes Research Institute.

"We're racing against time," said Ning Bo, director of the institute's digitalization office. "Weathering is like cancer to grottoes, eating away at the sculptures year by year."

As few technologies can prevent such progressive damage, preservation of the existing information is now an urgent task, said Ning.

Using three-dimensional laser scanning and multiplanar reconstruction, the institute is working to capture the shapes, colors and other fine details of the grottoes and create millimeter-level digital archives for future study and preservation.

"We hope to preserve the grottoes in digital form as much as possible, so people in the future will still have access to the information even if the grottoes fade away," Ning said, adding that the digitalization will also allow the public to "visit" the grottoes more easily on their computer screens.

The digitalization project, which began in 2003 at the grottoes, still faces challenges posed by the caves' enormous sizes, complicated structures and exquisite sculptures, according to the institute.

"The Yungang Grottoes were built into a mountain, and so our team is actually scanning structures as huge as a mountain. Besides, the inner structures vary wildly from exotic domes to traditional Chinese architecture, unlike flat murals (that can be more easily scanned)," said the director.

The Yungang Grottoes, located in the city of Datong, has 45 major caves and more than 59,000 stone statues. With a grotto complex stretching about 1 km from east to west, it is one of the largest ancient grottoes in the country.