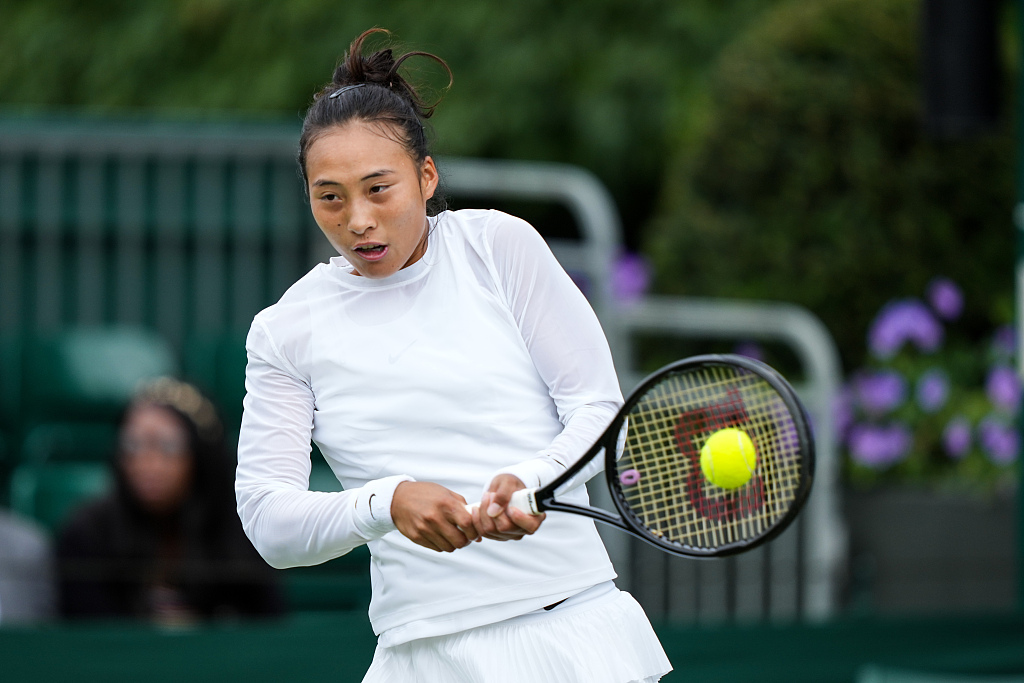 Zheng Qinwen of China returns a serve in the ladies singles match against Greet Minnen of Belgium at The Championships, Wimbledon at the All England Lawn Tennis and Croquet Club in London, England, June 30, 2022. (Photo: CFP)

Rising Chinese tennis star Zheng Qinwen has reached the Round of 32 in her first Wimbledon Championships journey after defeating Greet Minnen of Belgium 6-4, 6-1 in the ladies' singles match at the All England Lawn Tennis and Croquet Club in London on Thursday.

Zheng also paired with her compatriot Wang Xiyu for the ladies' doubles competitions at Wimbledon 2022, but they lost in the first round on Wednesday. Zheng admitted her skills and performance in doubles were a work in progress, but said she would continue playing.

"I paired with Chinese players in the ladies' doubles because I want to achieve something in both the singles and doubles events at the next edition of the Olympic Games," Zheng told Xinhua News Agency on Thursday.

The two singles victories gave Zheng great confidence, especially after losing in the first round at the two tournaments ahead of Wimbledon this year. "The more wins I get, the more confident I become. I'm happy for the two victories I got on the grass," she said. "I found how sharp my serves could be on the grass. So I need to exploit that and hopefully continue to perform steadily in the future."

Zheng has been the biggest surprise for China in tennis since the beginning of 2022. She made the Round of 16 at the French Open. Despite her loss to the eventual champion, Iga Swiatek, Zheng was the only player to win a set off the Polish ace at Roland Garros, not to mention it was an epic comeback win.

That result didn't make Zheng happy. "I wanted more than one set over her. I believe I am capable of defeating her," Zheng told Xinhua. "I failed to do so because of health reasons and I am very disappointed at my body. I think, if I'm in the best form, I can press her harder and the following two sets might have ended differently."

Zheng's next opponent at Wimbledon 2022 will be Elena Rybakina from Kazakhstan.