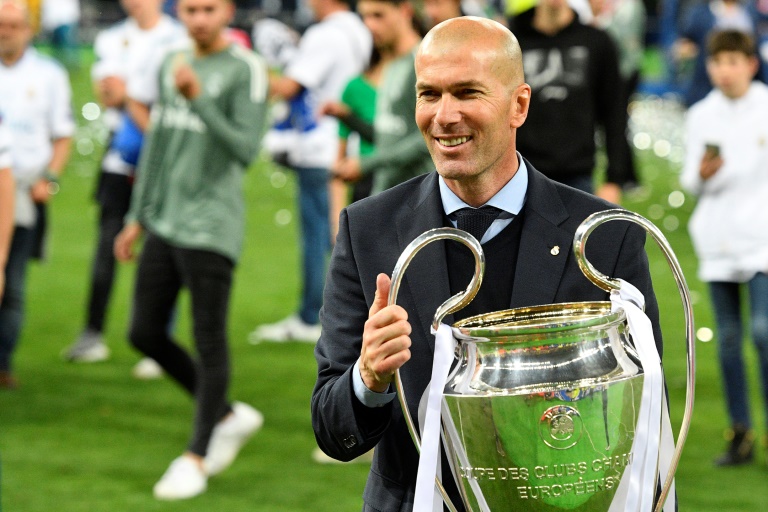 Zinedine Zidane with the Champions League trophy after Real Madrid's win against Liverpool in Saturday's final in Kiev (Photo: AFP)

Considered one of the all-time greats as a player, Zinedine Zidane was lauded with similar respect as a manager on Sunday after making more Champions League history with Real Madrid.

The Spanish giants' 3-1 win over Liverpool on a dramatic evening in Kiev allowed Zidane to become the first coach ever to win the Champions League in three consecutive seasons.

Incredibly, Zidane has broken new ground in less than three full seasons in charge after being promoted from his position as coach of Real's youth team to his first managerial role at the highest level in January 2016.

"You can't help but admire what he has done," France manager Didier Deschamps, who won the World Cup as a player with Zidane in 1998, told French TV station TF1.

Zidane is expected to one day manage France himself, but will be in no rush to move on from Madrid having drawn level with Bob Paisley and Carlo Ancelotti as the only men to oversee three European Cup triumphs.

"I need to congratulate the players as it is not at all easy what they are doing," Zidane said after the game in the Ukrainian capital.

"There are no words for it. That is what this squad is all about. They have no limit to what they can do."

Zidane was reluctant to take too much of the credit after seeing his side secure their fourth Champions League title in five seasons, and the 13th in the club's long love affair with the European Cup.

The 45-year-old also won the trophy as a player for Real, his volley in the 2002 win over Bayer Leverkusen in Glasgow being considered one of the best ever to grace a final -- although it was possibly surpassed by Gareth Bale's overhead kick on Saturday.

"Gareth's is better than mine," Zidane said with the selfless sacrifice that has seen him successfully manage to keep a dressing room filled with star names onside.

"Zinedine is the architect of this glorious and possibly unrepeatable era," said Madrid sports daily AS.

"All this would not have been possible without Zidane. The man of the ninth, and of the 11th, 12th and 13th (European Cups). His disarming and honest smile has infected a team that goes into finals of the European Cup without fear."

It is a remarkable record, all the more so for a man who even this week admitted to not being the best tactician.

"I am not the best coach tactically, but I have other things," he said ahead of the final.

"I know very well how the dressing room and a player's head works, and that for me is very important."

Liverpool manager Jurgen Klopp laughed off suggestions of a lack of tactical nous on Zidane's part, claiming instead: "This group of players with him obviously work like a clock from Switzerland."

Having such a talented squad certainly helps. Zidane has also had a fair amount of luck on his side, with Liverpool's night being marred by the first-half injury to Mohamed Salah that forced off their best player.

Two goalkeeping errors by Loris Karius helped too, just as a howler by Bayern Munich's Sven Ulreich had been vital in the semi-finals.

"It was an extravagant final, as it could only be with a cocktail made of (Jurgen) Klopp's energy, Zidane's fortune and Madrid's leading men," said Spanish newspaper ABC.

Nevertheless, guiding Real to the longest period of sustained success in Europe's elite club competition since the 1970s means, statistically at least, his place in the pantheon of great coaches is secure.