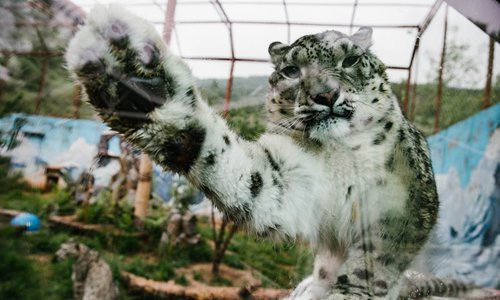 Snow leopard Aoxue growled threateningly and lashed out with her paws.

She was preparing to attack as she had seen a child pointing at her from the other side of the glass.

Aoxue, 3 years old, is China's first and only surviving, artificially bred snow leopard. She was born in the Qinghai-Tibet Plateau Wildlife Zoo (Xining Zoo) in Northwest China's Qinghai Province. Now she lives with "Grandpa" Dabao in the zoo.

Aoxue is a celebrity on the Chinese internet. Her topic hashtag "#PrincessAoxue" has more than 37 million views on China's Twitter-like Sina Weibo. People love Aoxue for being playful, bossy and sometimes silly.

Through Aoxue, many people are able to learn about her rare species of snow leopard, and activities are held both online and offline, encouraging others to help protect the species.

Aoxue has gained popularity thanks to Qi Xinzhang, the deputy head of Xining Zoo, who is also in charge of the protection and breeding of snow leopards.

Qi himself is an internet celebrity. His Sino Weibo account, Yuanzhang (meaning "round paw"), has 1.87 million followers.

He told the Global Times during an interview in Xining that snow leopards receive far less public attention than pandas. He believes that only through learning and understanding can people love a species. Therefore, he hopes more people will learn from Aoxue and come to love snow leopards.

Qi has loved animals since he was a small boy. In 2009, he graduated with a master's degree in Animal Nutrition and Feed Science from Qinghai University and began to work at Qinghai-Tibet Plateau Wildlife Zoo.

From starting as an animal keeper to becoming the deputy head of the zoo, over the years Qi has been popularizing the science of animals on the internet.

In May 2012, Qi opened his personal Sina Weibo account, Yuanzhang. A month later he opened an official account for the zoo. He is also running public accounts on WeChat.

On these social media platforms, Qi has been constantly promoting China's strategies on ecological construction and spreading knowledge about animals, which attracts many readers.

Currently, with millions of fans, Qi has become one of the most influential Weibo celebrities in Qinghai Province. He often interacts with internet users on Sina Weibo.

Qi also promotes several topics on Sina Weibo. Apart from "#PrincessAoxue," he has also created the topic "Pallas' cats are here," introducing the rare Felidas living in the plateaus of Asia.

The Pallas' cat topic hashtag had a view count of more than 45 million as of press time.

In China, snow leopards are a Class A protected animal and are classified as "vulnerable" by the International Union for Conservation of Nature. They live in the Himalayas in Central and South Asia at an altitude of 2,500 to 4,500 meters, the Xinhua News Agency reported.

Qi also said that snow leopards live in high-altitude regions, near the snow line. Surveys show that in the wild there are only 4,000 to 8,000 snow leopards globally.

China is considered to be the country that is home to the highest number of snow leopards, with about 2,500. Qinghai alone has more than 1,000.

Xining Zoo has been fostering snow leopards since the 1960s or 1970s. It successfully bred snow leopard cubs in 1984, but the technology was not passed on.

Qi remembers that in 2012, a female snow leopard gave birth to a pair of twin cubs, but the mother rejected the cubs soon after delivery. The breeders in the zoo took over their care, but failed to keep them alive for long due to a lack of experience and technology.

In the following years, several cubs were born in the zoo but none survived for very long.

Finally in 2016, Aoxue was born and survived into adulthood. This year, she has matured and joined the breeding project. "Her name was made by netizens," Qi said. Ao means "pride" and xue means "snow," forming a name that highlights the dignity of the rare animal.

Qi paid special attention to Aoxue. He has written 49 "princess diaries" for Aoxue on his WeChat public account, "Sin and Atonement."

What difficulties does the zoo face when it comes to breeding snow leopards?

Qi said that the leopards in Xining Zoo are not in an ideal condition to breed. Some of them were rescued from the wild after being injured or aged.

Moreover, as the only snow leopard breeding base in China, Xining Zoo has very little funding. Medicine and breeding technology can hardly develop.

"From my point of view, having the public's attention focused on snow leopards is far from enough," Qi told the Global Times, also noting that the big cats are very precious and play a significant role in the ecology of high plateaus.

"Only when people have very high concerns for snow leopards can social resources be invested [to protect them]," he said.

He compared the conservation of snow leopards to China's investment in pandas. "The law and scientific research for snow leopards is vastly different to those for pandas."

In zoology, it is believed that people get to know a species before feel concern for it. "The action brings hope," Qi said. "We hope more people can learn about snow leopards through Aoxue."

"With enough concern, snow leopards could gain more attention and social resources. With these we could expect more research into Snow leopards' protection and breeding."